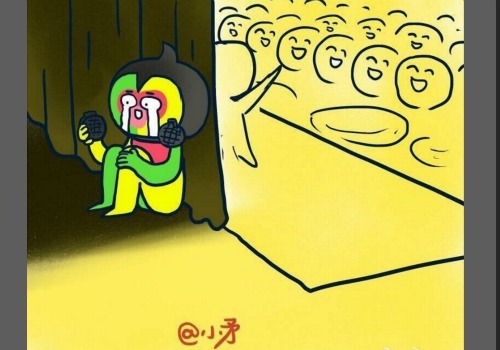 It is the first day of the Year of the Monkey. One day after the CCTV Spring Festival Gala, Weibo netizens have one burning question: whatever happened to the show’s official mascot Kang Kang the Monkey? The mascot, that became a trending topic because people deemed it ugly, was nowhere to be seen on the night of the Gala.

Just two weeks ago the CCTV announced this year’s Spring Festival mascot on its official   Weibo account. It was the second year that China’s state broadcaster had a mascot for its annual CCTV Gala; last year, it was Yang Yang the Goat.

But Kang Kang the Monkey turned out to be less popular than its predecessor Yang Yang. The mascot was ridiculed by netizens, who thought it was ugly. The 3D design (image below, on the right) was different from the original sketch (left). According to the majority of Weibo’s netizens, the designers of the 3D version had mistaken Kang Kang’s paws for balls, resulting in a monkey with ‘tumors’ growing from his head. 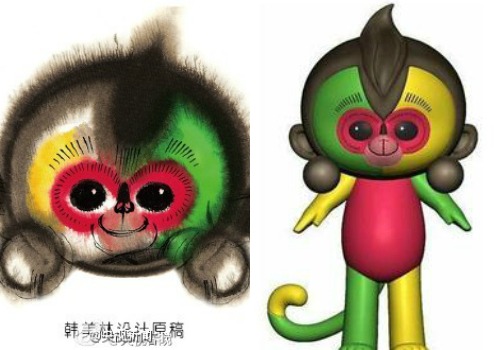 Kang Kang appeared in the promo video that was broadcasted before the CCTV Spring Gala, where the ‘tumors’ had seemed to have disappeared: 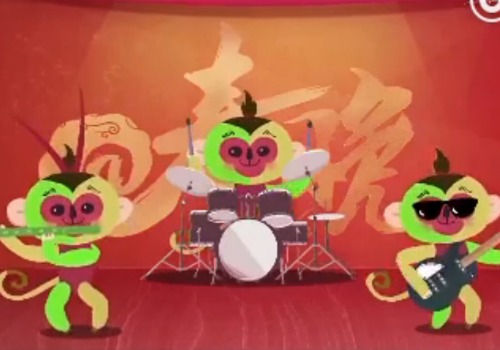 But on the night of the CCTV Gala, Kang Kang did not make its appearance at all. The next day, the question “Where did Kang Kang go?” (#康康去哪儿了#) has become a trending topic on Weibo.

Weibo netizens discuss the various reasons why Kang Kang did not come on the show, with some wondering if he left when he saw the show’s rehearsal, and others suggesting they should file a missing’s person report. There are multiple netizens who think Kang Kang might have carried ‘dangerous goods’ and did not pass the CCTV’s strict security checks.

“We first all thought he was ugly, but we cannot speak ill of the dead,…let’s take a moment of silent,” one netizen says.

“He was just so ugly that he did not dare go on stage,” another Weibo user writes.

Several drawings of a sad Kang Kang are circulating online. 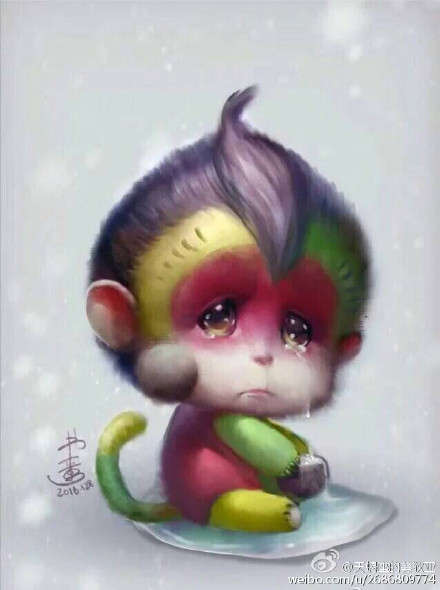 Meanwhile, CCTV has monkeys on its Weibo account that bear no resemblance to Kang Kang. The question whatever happened to Kang Kang remains unanswered. 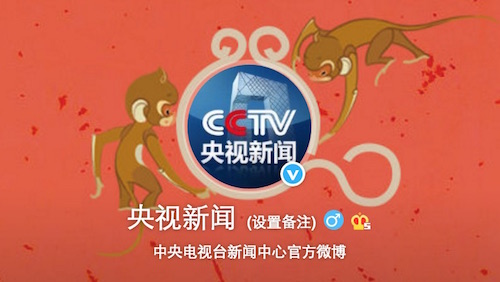 For an overview of the CCTV Gala, the video’s of the performances (without Kang Kang) and all the ins & outs, check out our CCTV Gala 2016 liveblog.

Heroes of the coronavirus crisis or victims of visual propaganda? A video showing female medical workers having their heads shaved has triggered controversy. 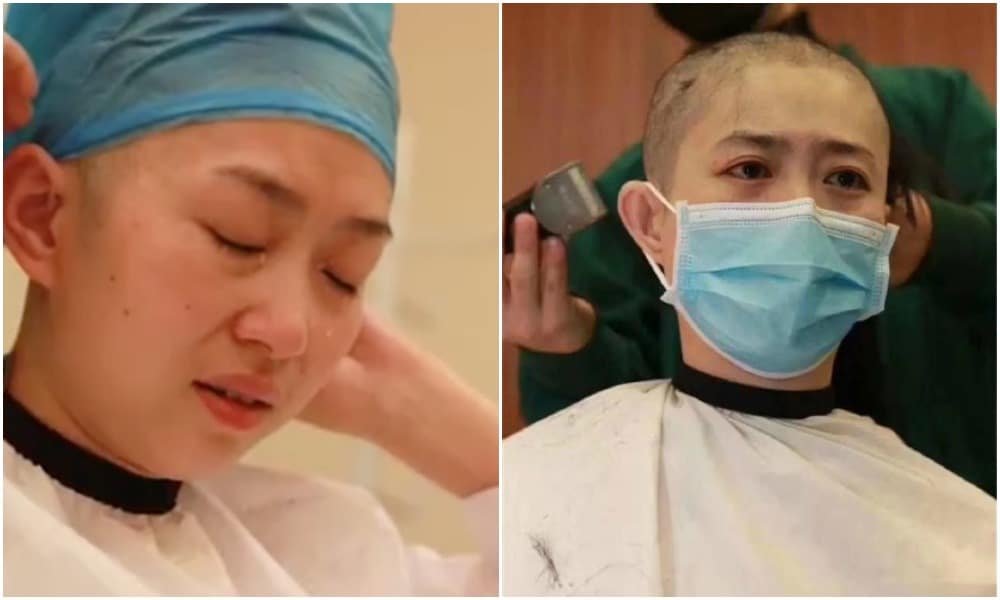 A Chinese media post praising female nurses for having their heads shaved has sparked outrage on Weibo and WeChat. Are these women heroes of the coronavirus crisis or victims of gendered visual propaganda?

The video, originally posted by Gansu Daily (每日甘肃网) on February 15, shows how a group of female nurses is standing in line to have their hair shaved off in preparation of their mission to Hubei to assist during the ongoing coronavirus crisis.

In the short segment that has since gone viral on Weibo and WeChat, some women can be seen crying while having all of their hair shaved off. 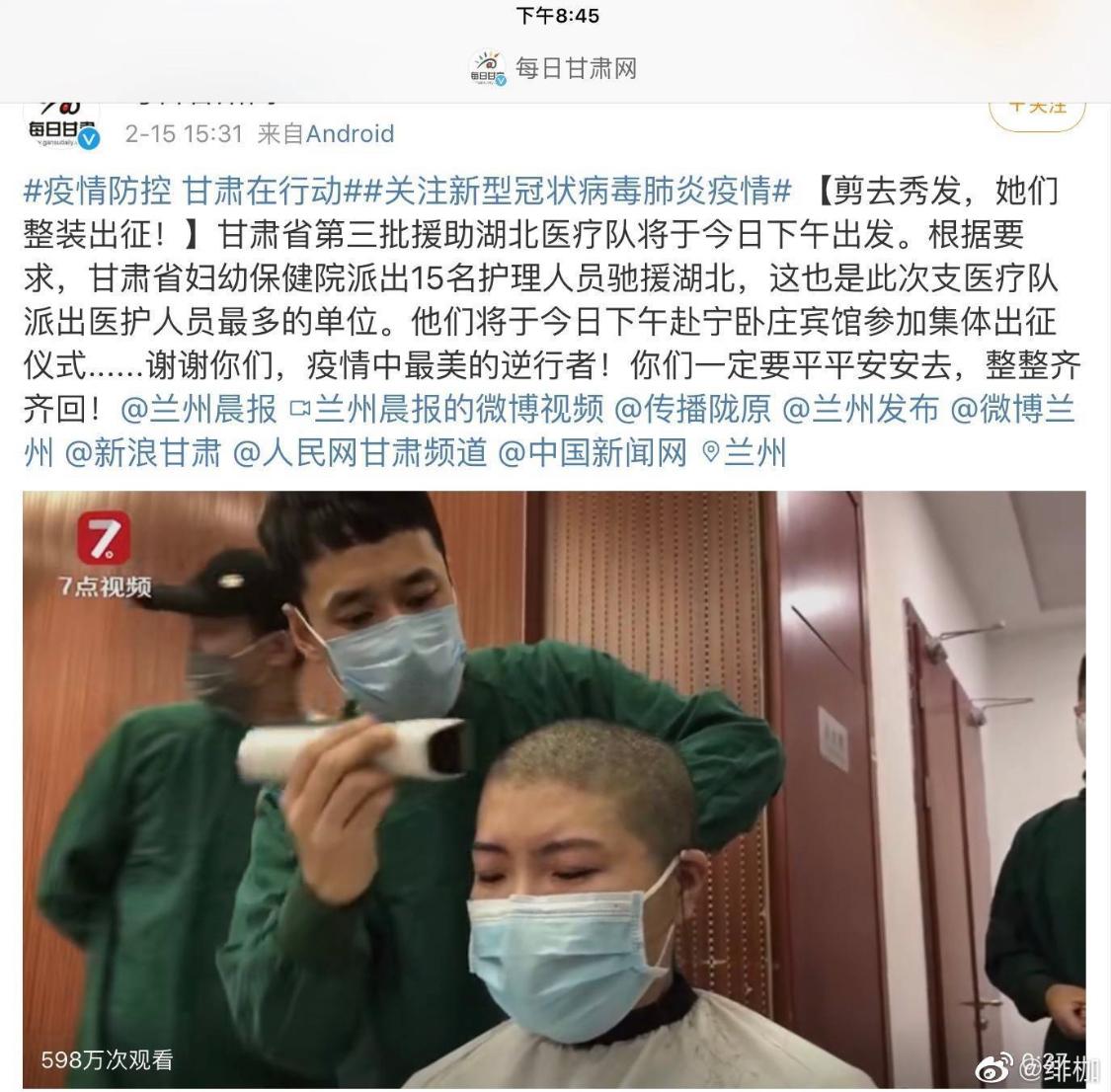 According to Gansu Daily and other Chinese media, the fifteen nurses, including one man, are part of a medical aid group that was sent out to Wuhan this weekend. Their hair was reportedly shaved off “in accordance with requirements” to make their work more efficient and reduce the risk of infection.

The original news post praises the women as “the epidemic’s heroes in harm’s way” (“疫情中最美的逆行者”) – a term also used to describe brave firefighters during the 2015 Tianjin explosions (for more background on this term in Chinese, also see Xinhua and Zhihu).

Although the story praises the female medical workers as heroes and was soon reposted and promoted by many other (state) media, it was not just met with positive reactions from Chinese netizens.

On the contrary: it triggered waves of criticism over the medical team’s supervisors requiring the women to shave off their hair, with many deeming the measures unnecessary, humiliating, and sexist.

“Why do they need to shave all of their hair, the men don’t even need to do that?!”, some Weibo commenters wonder.

Many Weibo users wonder how necessary it actually is for the women to go completely bold for medical work purposes, wondering why the male workers do not need to shave their heads and why the women could not just opt for a shorter hairstyle instead – suggesting the media circus surrounding the shaving of the heads is more about visual propaganda than actually being a necessity.

“I am a medical worker myself,” one Weibo user writes: “I consulted an infection control doctor [on this matter] and they said it is not necessary at all to have a bald head. Short hair is convenient enough, and hair has a protective function too to reduce [skin] irritation from the friction of wearing hats and masks. It furthermore also has a function of catching sweat, preventing it from dripping to your eyes. A shaven head does more harm than good.”

“Why do people need to bleed and cry in order for them to become heroes?”, others say: “This is just cruel.” 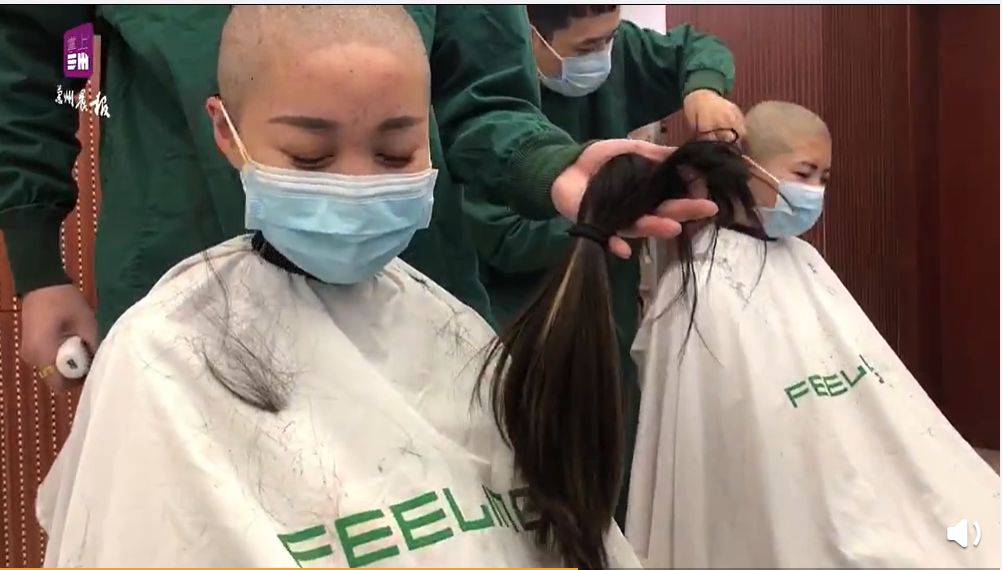 Adding to the online fury was a photo showing the group of medical workers after their heads were shaved, as the one male nurse in the group not only seemed to wear a better quality face mask, but also appeared to have much more hair left than the female nurses. 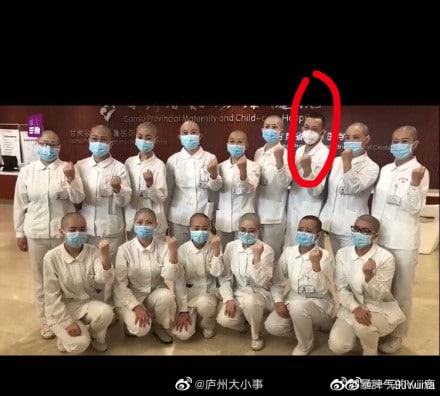 The original Gansu Daily post has since been deleted from social media. 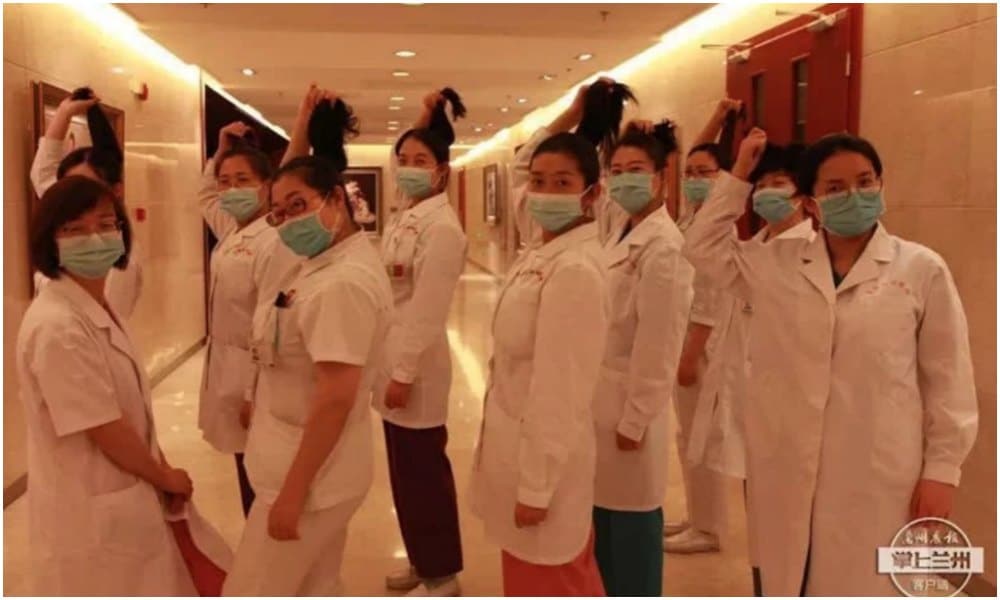 Recent online Chinese visual propaganda in times of the coronavirus crisis has seen a strong focus on Wuhan medical workers. 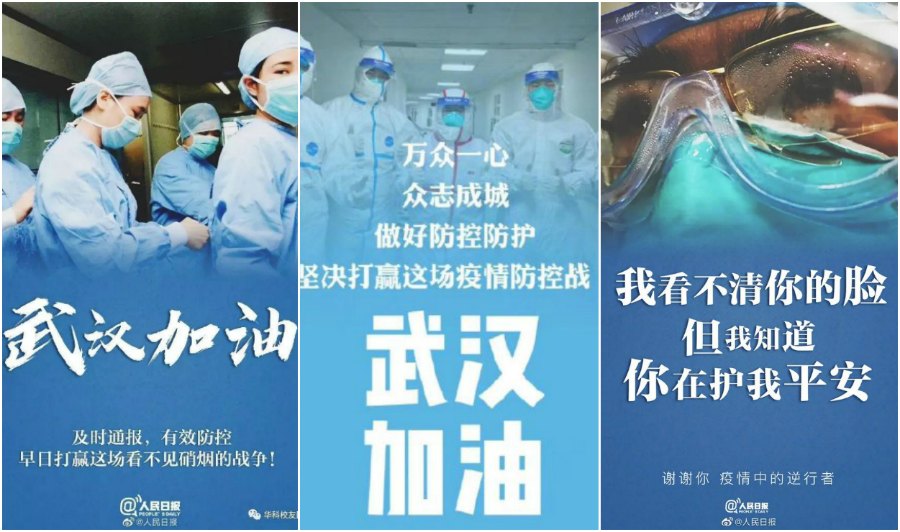 This kind of visual propaganda often highlights the idea of “sacrificing,” especially when it comes to women as pretty girls, loving mothers, or good wives. 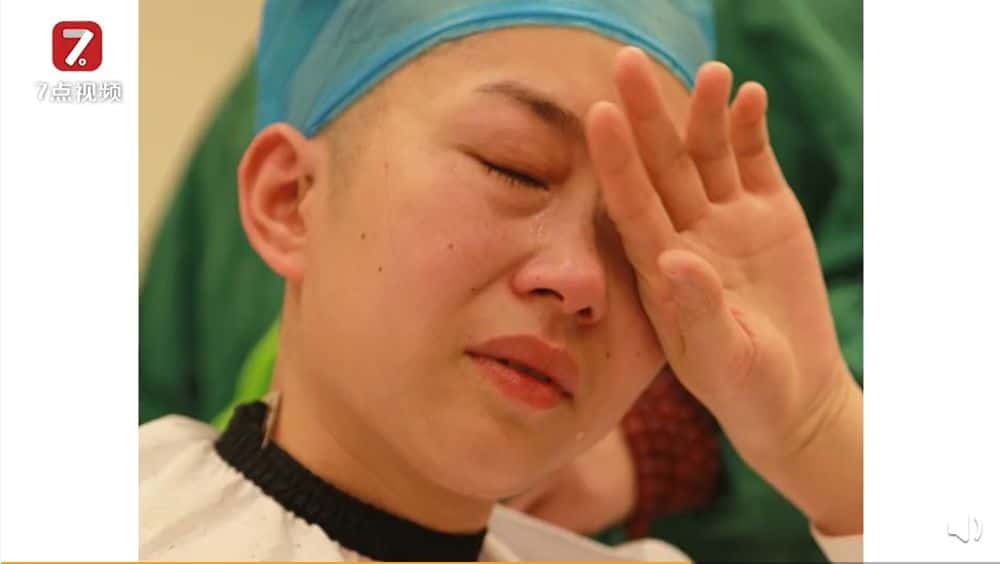 In the WeChat article, author Chen argues that Chinese state media always uses women’s bodies as a tool for propaganda, and argues that it should not be necessary for women to endure extra hardship or suffering (in this case, sacrifice their hair) in order to make them admirable ‘model workers.’ The fact that they are fighting on the front line should be more than enough reason to praise them, Chen writes.

While these women’s tears were “used to try to impress the audience” and become an example of some “collectivist spirit,” Chen argues, this kind of propaganda backfired because the individual needs and wishes of these women were completely ignored during the process.

Although the original story and visuals may have meant to be empowering in times of coronacrisis, they are actually counterproductive to female empowerment at large.

This is not the first time the role of women in Chinese state media propaganda become a big topic of discussion online.

In 2016, a photo series titled “100.000 soldier-loving girls” (十万恋军女孩) posted by China’s Military Web during the Wuhan flood also caused controversy. In the online media campaign, Chinese state media paid a ‘tribute’ to rescue workers by sharing pictures of girls holding the message “I wish to wash your uniform for you”. It triggered online discussions on the submissive female image propagated by Chinese state media.

At time of writing, various posts about the shaved heads of the Gansu medical workers have been taken offline.

By Manya Koetse (@manyapan) and Bobby Fung (@bobbyfungmr), with contributions by Miranda Barnes 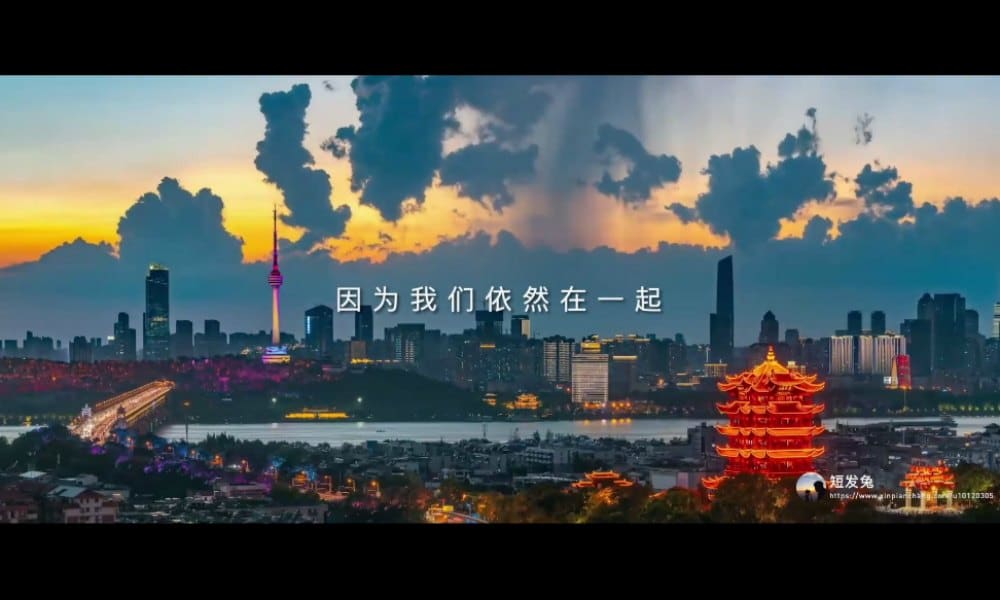 From Guangzhou to Shenzhen, from Wuhan to Chengdu, bustling streets and busy markets are left empty and quiet, as China is in the midst of dealing with the coronavirus (COVID-19) crisis.

“[People are] afraid, they are anxious, and the masks they wear widens the distance between them,” a whispered female voiceover says in a new 3-minute ‘documentary’ video that has been propagated online by Chinese state media over the past week.

The short video shows scenes from cities all across China – a deserted train station in Wuhan, a person cycling on a quiet Beijing street, a nearly empty highway in Shenzhen – while a tracker in the corner shows the number of confirmed coronavirus diseases cases in that location. 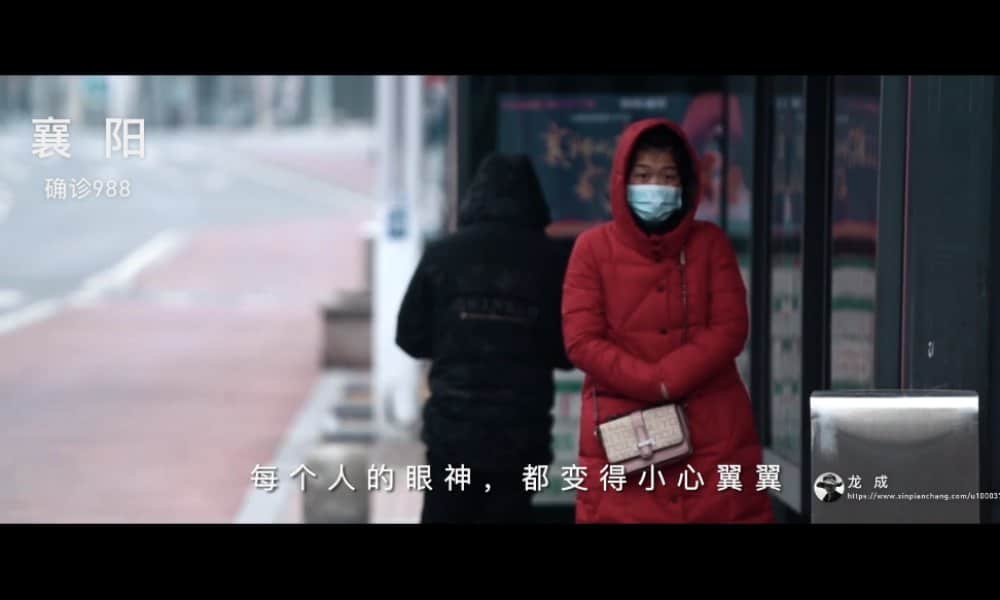 While the first half of the online ‘shortdoc’ emphasizes how COVID-19 has affected every corner of the country in negative ways, making the past Chinese New Year the most depressing one in decades, the second half shifts to a message of hope and positivity.

Instead of highlighting the grey and empty streets across China, the video focuses on the energy and courage of the medical workers, policemen, and construction workers across the country doing what they can to fight the battle against the coronavirus. 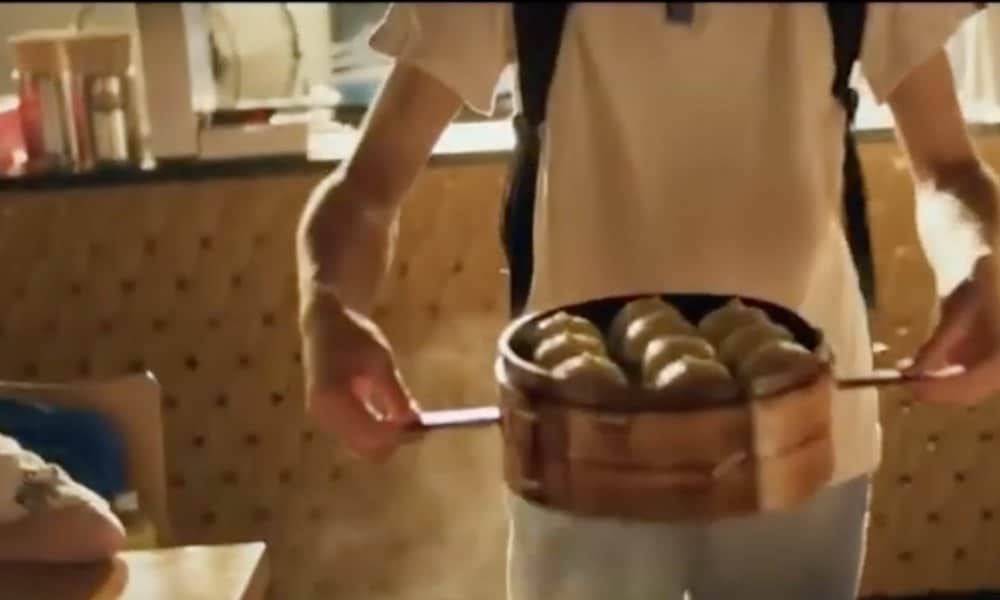 “We are looking forward to the day we will take off our masks again, leave our homes, be with our loved ones, and enjoy that tasty bite of steaming hot buns.”

The voiceover continues to say that “every city will wake up again” and that “the smiles will return to people’s faces,” concluding: “Because we are still together [in this], because we are Chinese.”

The short video ends with the slogan “Our cities are sick, but we will cure them” (“我们的城市生病了，但是我们会治好它”).

The video was produced under the ‘New Studio Media Group’ (Xinpianchang / 新片场社区) with video contributions from 48 different content producers from all over the country. Xinpianchang is a Beijing-based online media group and video content platform founded in 2012.

Many online viewers express that they are touched and inspired by the short doc.

Recently, Chinese social media has seen more short videos depicting what life in times of coronacrisis is like for people living in different parts of China.

Chinese publication The Cover (封面新闻) recenty also posted a three-minute video of the scenes in Chengdu city, showing that its once bustling streets are now more like a ghost city.

Some Weibo netizens from Wuhan also post short videos of their city, repeating the slogan “Our city is sick, but we will cure it” and welcoming people to visit Wuhan once this epidemic is over.

Over the past weeks, Chinese state media have started to disseminate and propagate more hopeful online content, praising the work of those fighting COVID-19 and showing support to the people of Wuhan and emphasizing the unity of China in times of crisis.

For more about this and other COVID-19 related articles, please click here.

This article has been edited for clarity.