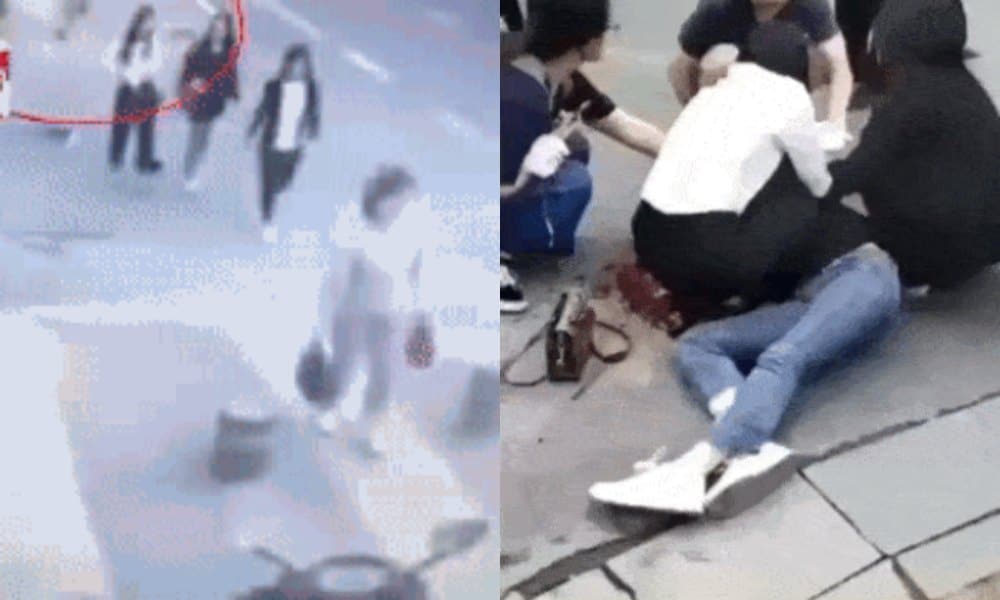 Chinese netizens have responded with shock and sadness after news came out that a young woman was stabbed to death on Friday afternoon in the city of Nanchang, in what appears to be a random attack.

In the late afternoon of May 24th, a Chinese woman was attacked and stabbed as she was walking the streets in Nanchang’s Honggutanxin District. The victim, a 24-year-old woman from Ruijin city, was rushed to the hospital shortly after the attack but died of her injuries.

The suspect, a 32-year-old man from Nanchang, was arrested shortly after, The Paper reports.

Nanchang is the capital of Jiangxi Province in southeastern China, and has a population of more than five million.

While local authorities are investigating the motives behind the violent incident, security footage making its rounds on social media show how the victim was walking by the side of the road together with two other women, when the man suddenly came up from behind and started attacking her.

The man continued to stab the woman when she was lying in the street and then fled the scene. The incident happened within a matter of seconds, and left the woman’s friends in apparent shock and terror, unable to rescue her from the attacker. 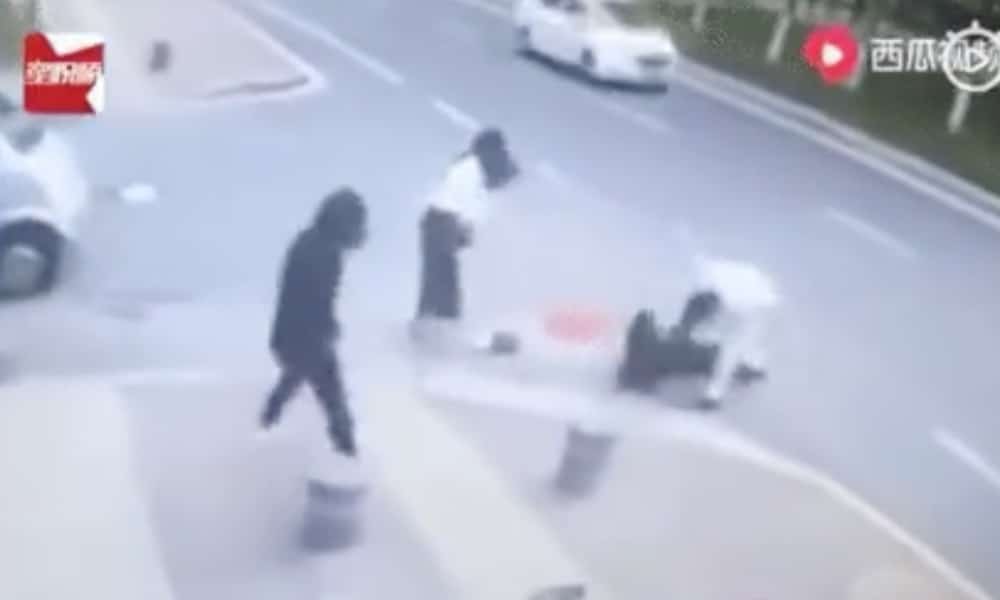 On social media site Weibo, many netizens discussed the case on May 27, but related hashtag pages were soon taken offline. The topic also seems to have been blocked from the site’s “hot search” rankings. At time of writing, the hashtag “Nanchang Honggutanxin Stabbing Incident” (#南昌红谷滩杀人事件#) is still accessible and has more than 7 million views.

Many people have responded with shock and are unable to make sense of why the incident occurred. “She was killed in broad daylight, in the city center, while walking with others,” some commenters said, with many others writing things such as: “It was not at night, she was not by herself, she didn’t wear any revealing clothing, she wasn’t taking a Didi.”

Last year, two young Chinese women were murdered while taking a Didi cab, a car-hailing service comparable to Uber. These crimes became one of the biggest stories on Chinese social media in 2018, igniting debates on women’s safety in China.

In 2015, a man with a sword stabbed a woman to death in front of the Uniqlo store in Beijing’s Sanlitun area. That same year, another Chinese man stabbed five random women who resembled his ex-girlfriend.

“Many similar incidents have occurred before,” one commenter writes about the Nanchang case: “We can’t give publicity to this news because it might lead to other people doing the same and it’s very hard to prevent. We can only pray for the innocent life that’s been lost.”

Screenshots of a WeChat conversation containing comments by a person who claims to have spoken to the suspect are currently being shared on Weibo. The person talking in the chat alleges that the Nanchang suspect suffers from a mental illness, and was unable to find a wife. He supposedly wanted to commit suicide, but in order not to die alone, decided to kill a pretty woman to die together with him. These comments and alleged motives have not been verified by official media.

Many women on Weibo are expressing their worries, writing that it is virtually impossible for women to “be careful” if they could even be attacked in the city center in broad daylight: “How can we be careful? I’m embarrassed to tell people to take care now, we can’t possibly guard against something like this,” a female blogger writes. 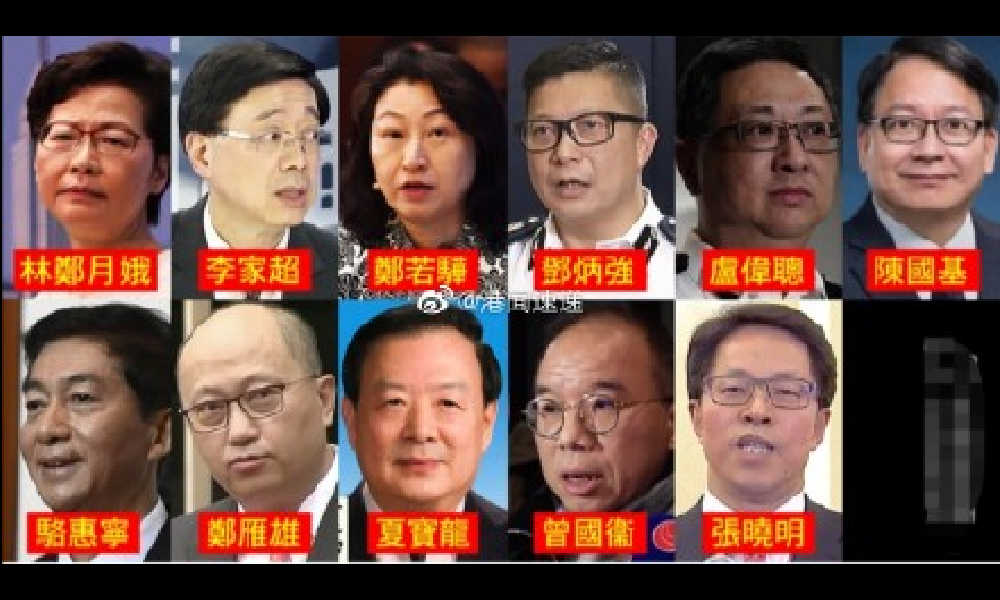 As ensions between the United States and China have been increasing on a daily basis, the US government has announced sanctions against the Hong Kong government senior leadership for carrying out Chinese “policies of suppression,” right after signing executive orders to ban Chinese apps TikTok and WeChat from operating in the US.

On Friday, August 7th, the US Department of the Treasury issued the names and personal details (home addresses, ID numbers) of the Hong Kong individuals added to the Office of Foreign Assents Control list of Specially Designated Nationals.

A Washington press release on Friday declared the situation in Hong Kong “a national emergency,” stating that the recent actions taken by the People’s Republic of China “fundamentally undermine Hong Kong’s autonomy and democratic processes,” and that these developments provide for “the imposition of sanctions on actors engaged in these malign activities.”

The sanctions freeze any property or financial assets the eleven individuals have in the United States, though, as reported by the BBC, Lam has said she does not have assets in the country.

On Chinese social media, where Trump’s sanctions on WeChat and Tiktok are still trending at time of writing, news of the second US official move of the day received less attention.

Not only did the news come when it was already night time in Beijing, but some hashtag pages relating to the issue were also taken offline.

The hashtag “America penalizes Chinese officials” (#美国制裁多名中国官员#) is currently online with some 2.7 million views, while the hashtag page for the hashtag “United States Sanctions Hong Kong SAR Chief Executive Carrie Lam” (#美国制裁香港特区行政长官林郑月娥#) was taken offline. This also means that all of these hashtags on Weibo are no longer linked to any page or overview.

The hashtag “America penalizes Chinese officials” (#美国制裁多名中国官员#) was initiated by Chinese media outlet Sina News, which is the current host of the hashtag page.

The announced US sanctions on WeChat cause concern on Weibo, where the question “Apple or Wechat?” is trending. 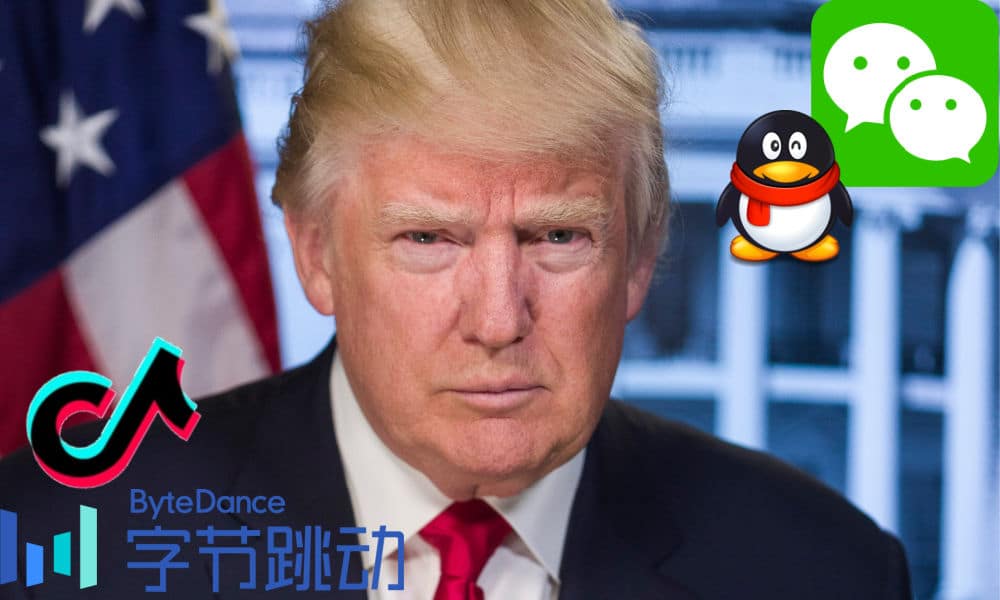 At a time of escalating tensions between the US and China, President Trump has signed executive orders to ban Chinese apps TikTok and WeChat from operating in the US in 45 days, if they are not sold by their parent companies Bytedance and Tencent.

The latest Wechat and TikTok sanctions are trending on Twitter, and also on Chinese social media.

On Weibo, the hashtag “Trump Declares that Bytedance and WeChat Will Be Banned from Operating after 45 Days” (#特朗普宣布45天后禁止与字节跳动及微信交易#) attracted a total of 250 million views on Weibo by Friday afternoon, Beijing time.

The executive orders issued on August 6 address the “threat posed by WeChat” and the “threat posed by TikTok,” and “the national emergency with respect to the information and communications technology and service supply chain.” The orders prohibit American companies and individuals from conducting transactions with TikTok and WeChat.

The order on TikTok, which is practically the same as that on WeChat, states that “the spread in the United States of mobile applications developed and owned by companies in the People’s Republic of China (China) continues to threaten the national security, foreign policy, and economy of the United States.”

It states that “the United States must take aggressive action against the owners of TikTok to protect our national security” and that..

– ..TikTok has been downloaded over 175 million times in the US.
– ..TikTok collects large amounts of data from its users, including location data and browsing history.
– ..TikTok use in the USA potentially gives the Chinese Communist Party access to Americans’ personal and proprietary information.
– ..Tiktok use heightens the risk of potential espionage and blackmailing practices.
– ..TikTok engages in disinformation campaigns and censors content deemed politically sensitive to the Chinese Communist Party.

The order prohibits any transaction by any person subject to the US jurisdiction with Bytedance. The WeChat order, similarly, also prohibits, from September 20 on, “any transaction that is related to WeChat by any person, or with respect to any property, subject to the jurisdiction of the United States, with Tencent Holdings Ltd. (a.k.a. Téngxùn Kònggǔ Yǒuxiàn Gōngsī), Shenzhen, China, or any subsidiary of that entity.”

Tencent stocks plummeted on Friday following the release of the executive orders.

On Weibo, there are mixed reactions to the executive orders, with many questioning what a ban on Tencent and Bytedance operations in the US would actually mean. The position of Apple in China frequently pops up in online discussions, with some claiming the order also means that Apple will ban WeChat from iOS, and suggesting that Apple should then also be boycotted in mainland China.

One online poll asked netizens: “What would you choose if iPhones were to ban WeChat, Apple or WeChat?” A great majority indicated they would choose Tencent’s WeChat over Apple products.

The question “Apple or WeChat” received so much attention that it soon also went trending.

“For me personally, WeChat is indispensable. There’s nothing that could replace it,” one commenter wrote.

More than a messaging app, WeChat is China’s superapp that functions as a messaging tool, a social media platform, a payment platform, an e-commerce app, a news source, and more. The app is also the main communication tool for many overseas Chinese to stay in touch with their families in the PRC.

“What are we gonna do now, write letters to each other?” one comment in a popular thread said.

China’s Ministry of Foreign Affairs responded to the recent developments, saying that America will ultimately “suffer the consequences of its own actions” (“最终将自食其果”).

There are also people on WeChat and Weibo commenting on the fact that China has already banned so many American products, from Google to Facebook and Twitter, that “there is nothing left to ban.”

“We have few countermeasures left to take,” multiple web users write about the recent developments, also noting that the US targeting TikTok and WeChat is not much different from China blocking American sites and apps.

“World War III takes place in cyberspace,” according to one Weibo commenter.

Some Weibo users are just concerned about their new iPhone: “I just wanna know how this will affect the use of WeChat on my iPhone,” one person writes. “I just bought a new Apple phone, and suddenly it doesn’t seem so appealing to me anymore.”

“I’ll just wait 45 days to see what happens next,” another Weibo user says.