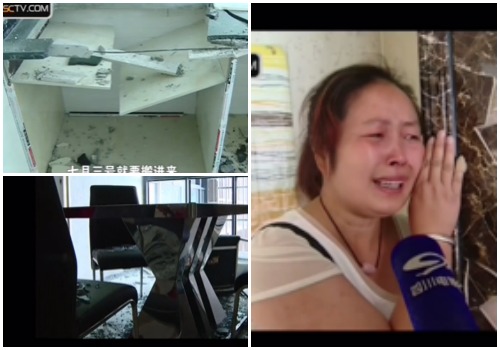 The owners of brand-new apartments in Chengdu recently have become the victim of a dispute between contractor and developer, that led to a sudden destruction of their homes in the early morning of June 28.

Twenty different brand-new apartments within one neighborhood in the Longquanyi district of Chengdu (成都龙泉驿) were recently destroyed by a group of approximately 100 construction workers.

The workers reportedly stormed into the apartment building in the early morning of June 28, forcing open dozens of doors and smashing apart twenty brand-new apartments. Some homeowners have an estimated damage of 300,000 RMB (±45,000US$).

The Longquanyi district police has sent out a message through its official Weibo account:

“On June 28 on 7.27 in the morning, Longquan police received a call that a group of people were purposely damaging property. After receiving this notification, we gathered a police force of 200 man and rushed to the scene to stop this illegal activity, control the situation and launch an investigation.”

According to the police, initial investigations revealed that the rampage was caused by a financial conflict between the contractors and the developers of the apartment building. This conflict escalated and led to the contractor’s side gathering a group of approximately 100 people who stormed the complex and smashed up different apartments, that had just been newly renovated by the owners.

After the rampage, a total of 17 people were questioned. The police have now taken 4 people in custody for intentional destruction of property, while the investigation is still ongoing.

The destructive rampage has become a point of discussion on Sina Weibo, where many netizens are angered. “Those contractor people don’t have any brains,” one Weibo netizen says: “They pretend like smashing up those apartments is like getting paid – as if this settles their bill!”

“There people need to be seriously punished,” another netizen writes.

Many Weibo netizens sympathize with the homeowners for losing so much of their hard-earned money. The average monthly salary in China’s biggest cities now stands at around 6070 RMB (±913US$).

“These migrant workers did not get their money, so they ruined the homes that people bought with their painstakingly earned cash. If you need to smash something, do it to the house of the real estate boss, or some government. This is intolerable! Evil!” another person writes.

“This just makes me cry. It is not easy for normal people to buy a house, they shed blood, sweat and tears for this beautiful dream. The people who did this need to severely punished.”