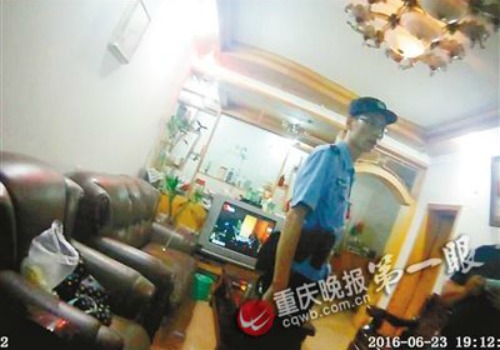 A 43-year-old woman from Chongqing recently faked her own kidnapping, leading to a team of 29 policemen searching for her for 2 days and 2 nights. When they found her unharmed, she said she staged her own abduction to “test if her husband still loved her”.

When a 43-year-old Chongqing housewife named ‘Huang’ suddenly disappeared on June 22nd, her family was worried sick as repeated phone calls to her smartphone were left unanswered – except for one.

During the evening of June 23rd, when Huang’s phone was suddenly answered, her husband heard a muzzled sound and could make out the voice of his wife saying: “Please don’t kidnap me. I know you are from Changshou [district of Chongqing]!”, before the connection was cut off.

The woman’s family immediately called emergency number 110, after which the local police station sent out a team of 10 officers to rescue her, Chongqing Evening News reported on June 30.

The local police station took immediate action after the emergency call. In the end, a rescue team was set up with a total of 29 officers working on the case. Various police officers scanned different areas in Chongqing and did house-to-house investigations while fully armed.

Through technological methods, the police traced that Huang had to be near a village in the vicinity of the Changshou suburban district, which corresponded to what Huang had mentioned on the phone about her abductor.

Investigators discovered that the Huang’s ex-brother-in-law also lived in the same area. When they called his house, the phone was repeatedly hung up. As this brother-in-law was known to work in a remote mining area, police suspected Huang might have been brought there and called reinforcement to go to the mines. After finding them empty, they went to her house where they finally discovered the true identity of the “abductor” – Huang herself.

According to Chongqing Evening News, Huang’s former brother-in-law stated that Huang had been at his home all along and had done all she could to repeatedly hang up incoming phone calls. When he demanded an explanation, she had left his home on the night of June 23.

Police finally tracked down Huang on the streets of the village, where she acted as if “nothing had happened”. Investigators later found out that Huang had fully staged her own kidnapping, for which she was sentenced to a 10-day detainment for “fabricating this affair”.

Huang later stated that, although she was happy with her marriage of ten years to her second husband and their family of two daughters, she just thought it “would be fun” to experience this “kidnapping”, and that she wanted to “test” how much her husband loved her.

According to psychological expert Gang Tanqiang quoted by the Chongqing Evening News, Huang represents the “classical urban empty person” (“典型的都市空心人”) who leads a “boring, monotonous and lonely” life and will go to extremes to put themselves at the center of attention.

Gang Tanqiang says: “If you experience feelings of emptiness as an urban citizen, be extra vigilant to avoid psychological problems. Talk about your feelings with relatives or close friends.” Gang also advises people to undertake outings to relieve boredom, and to join clubs for regular social interaction.

“This woman has a problem,” one Weibo user comments: “There’s always something, whether he loves her or not – she is too focused on what others think of her. And she has wasted the time of 29 police officers because of it. She should be detained.”

“These kind of police officers are hard to find, and yet she deceives them!” another commenter writes.

“Detaining her for 10 days is too light of a punishment…” one Weibo user writes. “To make false police reports, this goes beyond any joke,” another netizen says.

Featured image: police officer during one of the house-to-house searches for Mrs. Huang, picture by Chongqing Evening News.