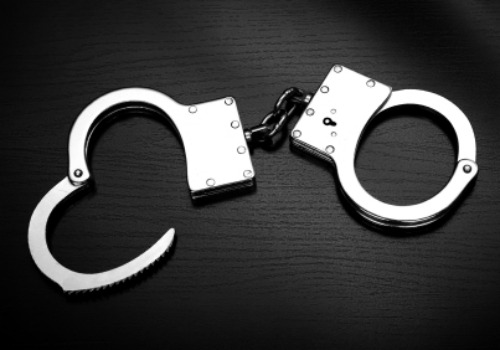 A man who calls himself a “master” (主人) and a woman who calls herself his “slave” (奴隶) recently caught the attention of Chinese media after they repeatedly put kinky pictures on Weibo. The pictures, that feature the girl kneeling on the ground in various places, some with red skin from being slapped, were soon deleted after they made the news and local police intervened. 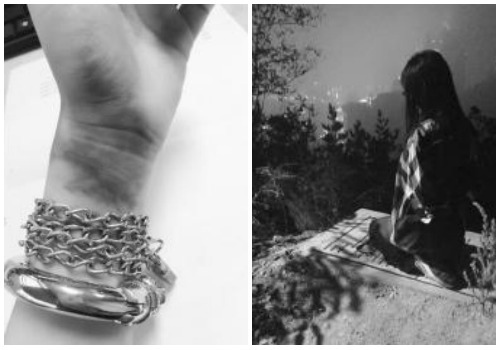 The only two pictures made available by Chinese media.

Journalists came across the pictures when a concerned netizen tipped them about the unconventional couple.

“The couple suffers from a disease called ‘sexual abuse addiction’. ”

Chinese state media outlet Global Times, often called the Party mouthpiece, dedicated an article to the couple on September 27. According to the article, the two have been posting their self-taken pictures since this summer.

Some photos depicted ropes and cuffs, with the woman’s bruises clearly visible. According to Global Times, many Weibo netizens were “disgusted” with the “vulgar” pictures. 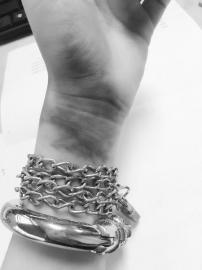 An expert interviewed by Global Times says that the couple suffers from a disease called ‘sexual abuse addiction’ (性虐待成瘾).

Global Times writes that “sexual abuse addiction” conflicts with China’s social norms. According to China’s leading psychologist Zhao Xiaoming (赵小明), the causes of this ‘disease’ are complex and can be traced back to childhood abuse or sexual violence, leading people to search for “abnormal stimulation” as an adult.

The public display of ‘sexual abuse addiction’ negatively affects individuals and society at large, the article argues, but can be completely cured. The Weibo couple should, therefore, “seek professional medical attention” in order for them to be able to “lead a happy life”.

“Clearly, this is just art, but you say it is vulgar.”

On Weibo, the accounts of the man and woman mentioned have been emptied of any pictures from before September 26. The woman, nicknamed Nuo Xiaozhao (@诺小昭), commented: “I didn’t expect this. But my conscience is clear.”

The man (@黑黑老大爷主人) only posted: “Our pictures have nothing to do with you. Right, my little slave Nuo Xiaozhao?” 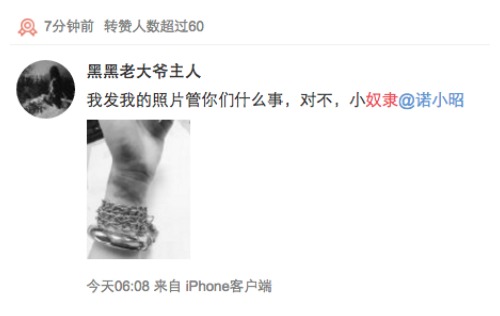 He also posted a picture, writing: “Clearly, this is just art, but you say it is “vulgar”. This storm will blow over and we will continue.” 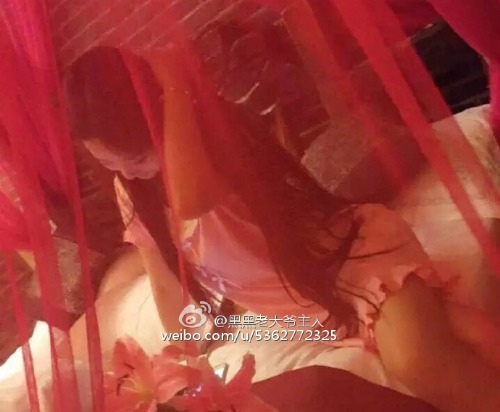 One female netizen wrote to the woman: “I respect every kind of lifestyle, people are entitled to do their own private things. I understand you, and everything will be ok. I’ll support you!”

Other netizens also offer their support, saying: “Believe in yourself!”

Some pictures previously posted by the couple also leaked online through various Chinese blogs (update 6 Dec 2017: we were forced to take these photos, that did not contain any nudity, offline by Google censors as long as we display Google Ads on this website. Sorry.)

One Weibo user comments: “Actually I think different people will have different views on this. Some will think you have no sense of shame. That’s because in China we’ve always been conservative. The people who applaud you also don’t necessarily approve of you – they just want to see your pictures and fantasize about them.”

“If they like it, what does it matter?” another netizen writes: “What does the police have to do with it?!”

Although Fifty Shades of Grey was banned from cinemas in mainland China, the film found its way to Chinese streaming sites and DVD stores. Since it was heavily censored with all sex scenes cut out, the Chinese version was much shorter than the American one.

China censors have been on a crusade against “vulgar, immoral and unhealthy content”. Regulations implemented earlier this year ban any content that “exaggerates the dark side of society”. Homosexuality, extramarital affairs, one night stands, underage relationships are all illegal on screen.

The recent article in Global Times is especially noteworthy because the newspaper published an article with an entirely different tone in 2015.

Related Topics:China sexuality
Up Next

Another Apology to China? One Taiwanese Model and China’s Angry Cyber-Nationalism

“These people are participating in the Winter Olympics as if they’re entering a cave with wolves and tigers.” 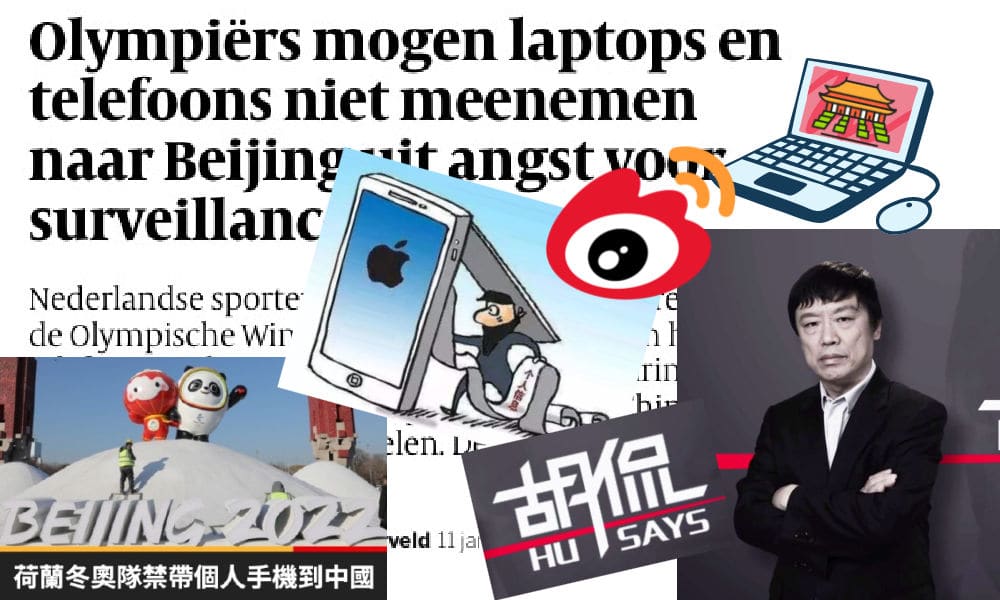 News about Dutch Olympic athletes being advised by the country’s Olympic Committee not to bring their own smartphone or laptops to the Winter Olympics in China has become a much-discussed topic on Chinese social media.

On January 11, Dutch newspaper De Volkskrant reported that NOCNSF, the umbrella organisation for sports in the Netherlands, issued a warning to partipating Dutch athletes that they should not bring their personal smartphones, tablets, or laptops with them to the Beijing Olympics to avoid Chinese espionage.

NOCNSF spokesman Geert Slot said cybersecurity was part of the risk assessment made but declined to further comment on specific measures. In the article, the advice is described as a “precautionary move” related to concerns over potential cybersecurity safety issues in China.

The Dutch CEO of security company Zerocopter, Erik Ploegmakers, calls the move a “very wise” one, referring to the difficulties of using a VPN within China and mentioning how all online traffic would flow via Chinese internet infrastructure, saying that “China is able to view and manipulate all internet traffic, ‘so you basically carry your past information with you,’ including old messages, training schedules, medical data, contact details, and photos.”

On Chinese social media site Weibo, Global Times commentator Hu Xijin (@胡锡进) commented on the Dutch ‘precautions.’ Until recently, Hu was also the editor-in-chief and party secretary of the state media outlet, and he has over 24 million followers on his Weibo account. He writes: 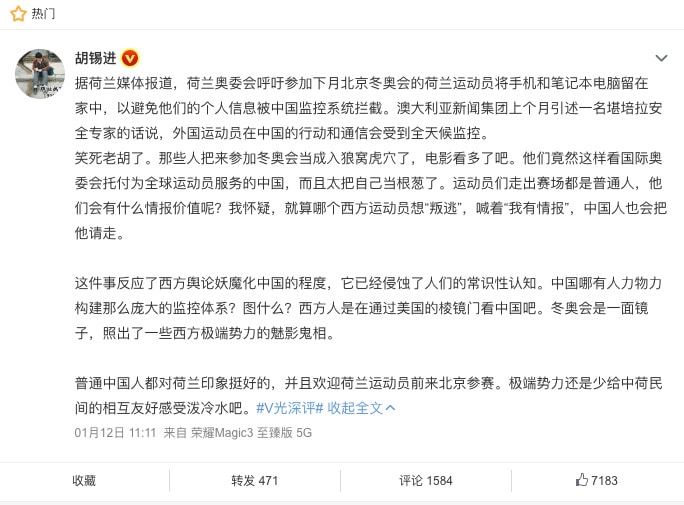 “According to Dutch media reports, the Dutch Olympic Committee has called on Dutch athletes participating in next month’s Winter Olympics in Beijing to leave their mobile phones and laptops at home to avoid having their personal information intercepted by Chinese surveillance systems. Last month, the Australian newsgroup quoted a Canberra security expert as saying foreign athletes’ movements and communication in China would all be monitored around the clock.

This cracks me up. These people are participating in the Winter Olympics as if they’re entering a cave with wolves and tigers. They’ve watched too many movies. Is this is how they look at China, which the IOC entrusted to serve athletes from all around the world? They must think they’re all that. Athletes are just common people once they’re off the field, what kind of intelligence value do they have? Even if a western athlete wanted to ‘defect’ and would shout out “I have information for you!”, the Chinese would probably still ask them to leave.

This entire issue reflects the degree to which Western public opinion has demonized China. It has eroded people’s common sense. How can China have the manpower and resources to build such a gigantic surveillance system? To do what? Western people are looking at China through an American lens. The Winter Olympics are mirroring the ghostly appearance of some Western extremist powers.

Ordinary Chinese people have a good impression of the Netherlands and welcome Dutch athletes to Beijing. The extremists should stop pouring cold water over the warm mutual friendship between the Dutch and Chinese people.”

Hu’s post received over 7000 likes and hundreds of comments.

“Do people from around the world think we’re like North Korea or something?” one person responded. Another commenter wrote: “They’d better not come. All of our snowflakes are equipped with small 5G chips, they will be monitored as long as they participate, it’s mainly to see if they’ll pick up things to eat from the floor, to see what they do when it rains, and to check if their urine and stool is showing any irregularities and stuff.”

In other Weibo posts, users said: “I wonder what the Dutch and the Belgian people have to hide?”

The Belgian Interfederal Olympic Committee has also recommended that all Belgian athletes traveling to the Beijing Olympics leave personal laptops and smartphones at home.

The nationalistic blogger GuyanMuchan (@孤烟暮蝉), who has over 6 million Weibo fans, also responded to the issue, writing: “Ridiculous, this is just shameless. As an athlete, what kind of classified information do you have that China would steal from you? Are you all spies with a second identity?”

This is not the first time Dutch people are advised not to bring their regular smartphones or laptops with them to China. In 2018, before a Cabinet delegation went on a trade mission to China, the Dutch Ministry of Foreign affairs also advised travelers to only bring devices without personal data to China. The same advice was also issued for those traveling to Russia, Iran, or Turkey.