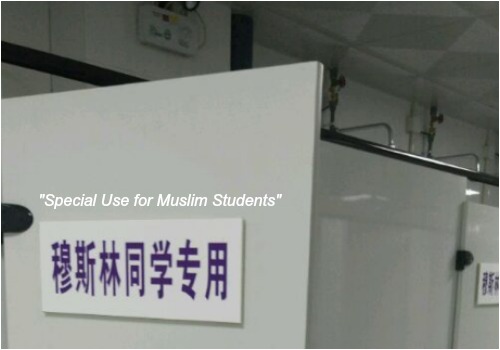 A university in eastern China recently introduced Muslim-only shower cabins. The cabins, exclusive to Muslim students, offer more privacy than the regular communal showers. The new shower arrangements have fuelled discussions on Chinese social media, where many netizens are disgruntled and consider the special showers a display of muslim privilege.

The Student Union of the Anhui University posted several pictures of its newly renovated public showers on Chinese online platform Zhihu.com on September 17. While the new communal showers have divider walls, the “Muslim-exclusive” cubicles have their own private doors.

“According to the Koran, showering is a private act for Muslims and should not be seen by others.”

The university explained the design of these cabins in an announcement: 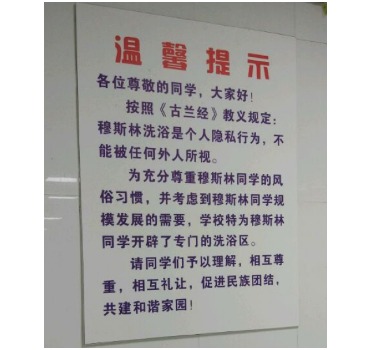 Dear Students,
According to the Koran, showering is a private act for Muslims and should not be seen by others.

We hope all students will understand and respect each other, to promote integrity among ethnic groups and jointly build a beautiful home. 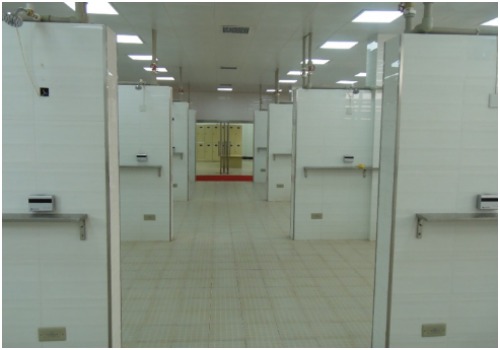 Due to limited resources and a large number of students, Chinese universities often have communal showers that provide little or no privacy. Dozens of students shower at the same place, sometimes without any curtains or divider walls.

In the case of Anhui University of Science and Technology, the new public shower does have shower partitions, but it is only the “Muslim-exclusive” cabins that have their own doors, and thus offer complete privacy.

The Muslim-exclusive shower cubicles of the Anhui University evoked heated discussions on Chinese online forums such as Baidu Tieba (百度贴吧).

For many netizens, it is not the “privilege” but the “Muslim” element that angered them. “I also have the f**cking rule that nobody should see me shower, am I going to have an exclusive shower cabin now?” one netizen writes.

The news also triggered hate speech: “Why should we treat these green maggots as masters? Why should lesser people receive better treatment?”

“All shower heads should be made into the shape of a pig”, another netizen remarks.

This is not the first time Chinese netizens display anti-Muslim sentiments and hate speech towards so-called “Muslim privilege”. It seems that anti-Muslim sentiment is becoming more ubiquitous on Chinese social media; even the smaller news items such as the Anhui shower cabinets quickly trigger heated reactions.

“Does this mean islamic laws are already taking effect in China?”

Earlier this year, a proposal for Halal food regulation received much opposition from netizens, of whom many viewed the regulation as a symbol of Chinese islamization. When the proposal was eventually halted in April, many netizens considered it a ‘victory’.

The ‘islamization’ of China seems to be a recurring source of concern for some netizens. Author Li Mu (李牧) writes on Weibo: “There are more and more state-funded Muslim canteens, Muslim public baths, (..) who approves of this? Since some of these activities are explained through the Koran, does this mean islamic laws are already taking effect in China? We better prepare, because a big change is about to come.”

“I am already preparing,” one netizen responds: “I bought 12 classes of Islamic teachings. I listen to them every day in the car. But honestly, the more I listen, the more alarmed I get.”

“Chinese Muslims have become an easy target for aggressive sentiments.”

One young Hui Muslim recently told What’s on Weibo: “The internet has become a channel to release the negative emotions from real life. Due to the recent media discourse on Islamic extremism and its minority status, Chinese Muslims have become an easy target for aggressive sentiments.”1

There are also netizens with other points of view: “I think we should not oppose Muslim students getting separate shower cabins”, one netizen writes on Sina Weibo: “Instead, we should demand separate cabinets for everyone. After all, a shower cabinet with a door is not a privilege – but it appears to be if it is granted to some students only.”

1 As part of research/interview by the author for another article on this topic.

Additional editing by Manya Koetse.
©2016 Whatsonweibo. All rights reserved. Do not reproduce our content without permission – you can contact us at info@whatsonweibo.com.

Related Topics:China religion
Up Next