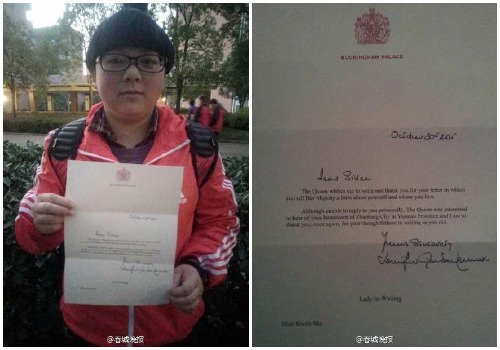 A schoolgirl from a city in the south of China wrote a letter to the Queen of England asking her to visit her town. Much to her surprise, the girl got a letter back.

A middle-school student from the South of China named Siwen Ma recently sent a letter to the Queen of England, asking her to come and visit her hometown.

Siwen Ma (马思雯) is from a prefecture-level city named Zhaotong (昭通) in Yunnan, southwestern China. It is known as one of the poorest places of the province. The area became well-known when it was struck by an earthquake in 2014.

According to Chuncheng Evening News, Siwen wrote the letter because she read a lot about the Queen, and she wanted to practice her English. In her letter, she welcomed the Queen to come to Zhaotong, and congratulated her to have become England’s longest serving monarch in history.

Much to her surprise, the schoolgirl got an answer back from the Royal Palace. According to Chuncheng Evening News, the letter was signed by the Queen herself. Although this is not accurate, it is somewhat close; it was personally signed by Queen Elizabeth’s lady-in-waiting.

“Dear Siwen,
The Queen wishes me to write and thank you for your letter in which you tell Her Majesty a little about yourself and where you live.
Although unable to reply to you personally, the Queen was interested to hear of your hometown of Zhaotong City in Yunnan Province and I am to thank you, once again, for your thoughtfulness in writing as you did.” 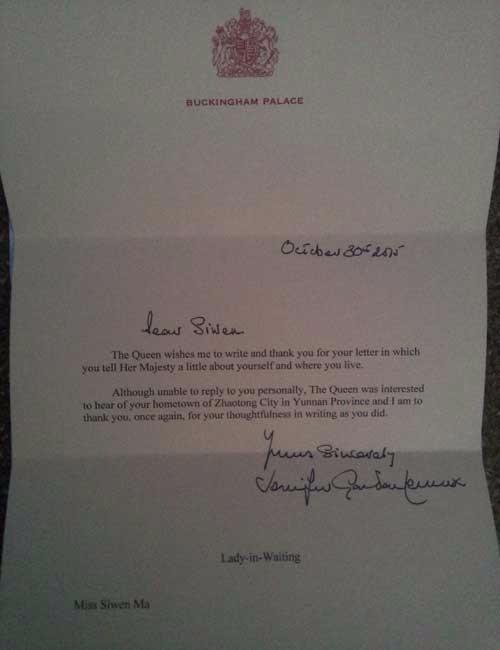 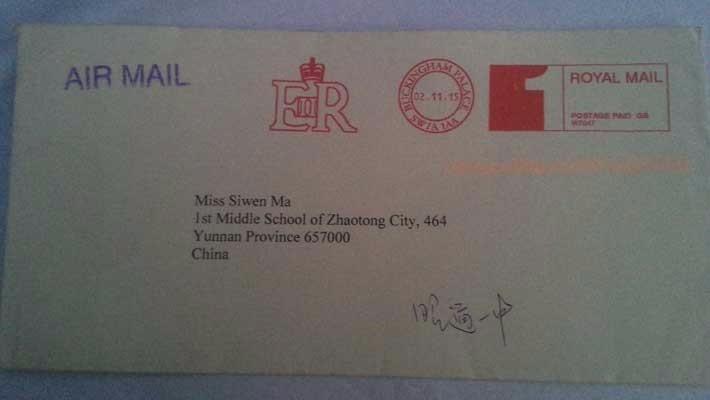 Siwen told the local newspaper: “Actually, foreign affairs are not far away from us. From the big diplomatic and foreign affairs point of view, everyone actually is an ambassador to the place or country they come from.”

The topic is posted to Sina Weibo under the hashtag of “The English Queen replies to Yunnan Schoolgirl” (#英女王回信云南女生#).

Most netizens respond to the fact that the media falsely state the letter was personally signed by the Queen herself (“Do you read English at all?!”), and others react in amazement that the Queen actually has someone who writes letters for her: “Just like Santa Claus,” one netizen says.

Amongst the reactions are also those from fellow Zhaotong residents, who seem to be proud that their city is mentioned by the Royal Palace.

“Why don’t we try to write the Big Leader [Xi Jinping] a letter,” one netizen says: “And see what happens then?”