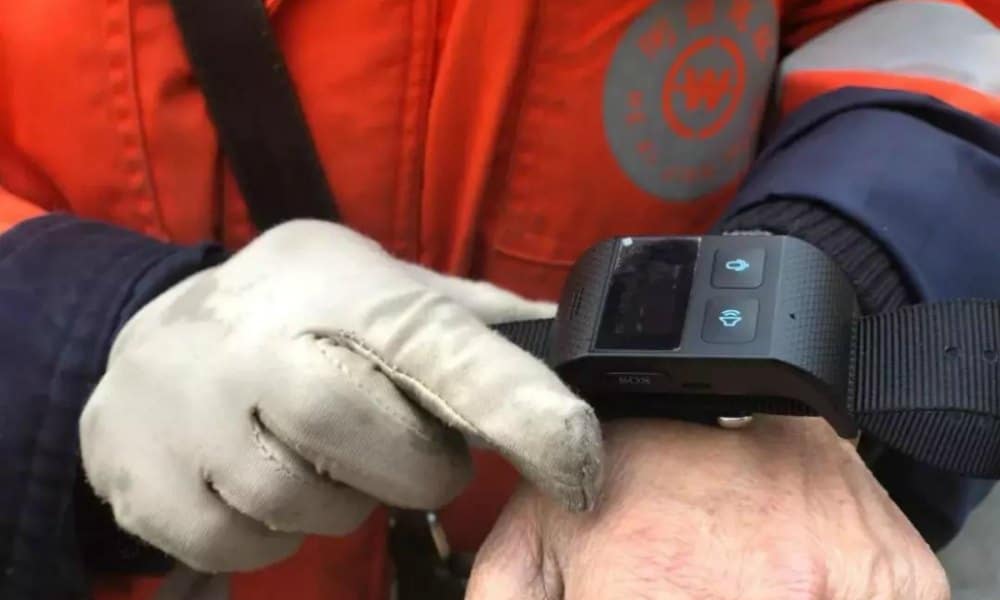 The times of chatting with the neighbors, taking a break, or doing some shopping during work hours are seemingly over for Nanjing’s street cleaners now that their every move is monitored through a special smartwatch. News of the mandatory GPS tracking bracelets for sanitary workers triggered public outcry earlier this month. But it’s not just Nanjing street cleaners that are subjected to this policy.

Earlier this month, the introduction of smartwatches tracking the movements of street cleaners in Nanjing attracted the attention of Chinese netizens and international media after the new policy was made public on April 3rd.

In March of this year, the sanitation department in the Hexi area of Nanjing, Jiangsu, started a pilot with a smartwatch that sanitation workers are obliged to wear. The watch has a built-in real-time GPS tracking system, allowing the Nanjing Hexi Smart Sanitation Center to monitor workers’ movements.

In a short video published by Toutiao News, a spokesperson of the Smart Sanitation Command Center* explained that the smartwatch currently allows the company to assess the workers in three ways: they can register workers’ attendance, collect statistics of workers leaving their designated work area, and report on workers that remain in the same position exceeding the allowed amount of time.

Sanitation workers also commented on their new working system. One person interviewed said: “Why wouldn’t I be allowed to have a half-an-hour break? Look, the street is all clean, there is nothing to be cleaned up. They are crazy for making us move up and down the street for no reason.”

Street cleaners also said that the system would automatically report them if they had been in the same spot for more than twenty minutes. The smartwatch would then subsequently encourage them to move, calling out “Jiayou! Jiayou!” (“Come on! Come on!”).

That particular function was reportedly removed shortly after public outcry on the policy.

On Weibo, the hashtag “Smartwatch Automatically Yells ‘Jiayou'” (#智能手表自动喊加油#) received over 2,5 million views, with the majority of commenters strongly rejecting the new approach.

Most commenters on this issue argued that the implementation of the smartwatch is “immoral” and that the Nanjing workers are “treated as criminals.” Many others also pointed out that the workers, often senior citizens, should be able to rest for more than 20 minutes.

In light of the new policy, many people on social media also referred to the infamous fictional character Zhou “Bapi” (周扒皮). In the novel The Killing Wind, this landlord Zhou would stick his head into the henhouse stirring up the roosters to wake his laborers up earlier, so they would start working.

Some netizens came with an alternative solution, suggesting that the leaders of the company should wear the smartwatches themselves instead.

While the controversial function was eliminated, the GPS tracking function still stands.

Nanjing is not the first city to introduce GPS tracking smartwatches for its sanitary workers. Other cities where the same policy has been introduced are, for example, Chengdu, Hangzhou, Guangzhou, and Qingdao, according to Chinese media outlet Global Times.

In the summer of 2018, various Chinese media outlets already reported about the introduction of smartwatches for street cleaners in Guangzhou. At the time, the smartwatch policy was described as an innovative way to solve staff deployment and management problems, giving team leaders more insights into the real-time position of the street cleaners.

Whether or not the smartwatches do indeed improve work efficiency of street cleaners is still unclear, but there are no indications that the smartwatch policy will be changed at this point.

The tough work conditions of Chinese street cleaners, who work long hours and receive minimal pay, regularly become an issue of debate on Chinese social media. Besides praising the hard work of China’s public cleaners, Chinese netizens often express their sympathy for the bad circumstances under which street sweepers have to work.

After Notre Dame Blaze, Chinese Netizens Remember How the French Burned Down the Old Summer Palace