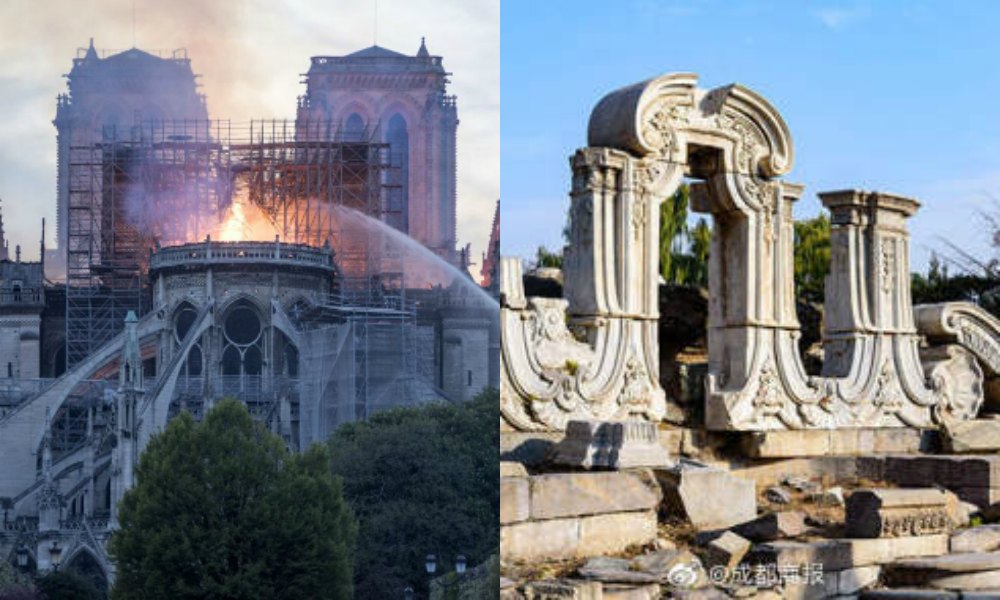 While many people across the world are mourning the devastating fire that left parts of the 800-year-old Notre Dame Cathedral in Paris completely destroyed, Chinese social media users have collectively responded by remembering a painful part of China’s history: the burning of the Old Summer Palace in 1860 by Western forces.

Update April 18, read: Blazing Memories: About the Comparison of the Notre Dame Fire to the Burning of the Old Summer Palace (Op-Ed)

As news of the catastrophic fire that engulfed the Notre Dame Cathedral (巴黎圣母院) in Paris on Monday made headlines across the world, the Old Summer Palace (Yuan Ming Yuan 圆明园) suddenly became a trending topic on Chinese social media.

For some, the Old Summer Palace trend was an unexpected reaction to the Notre Dame blaze. Although prominent Weibo users commented on the issue, there seemed to be no official accounts leading the trend – it seemingly came out of nowhere.

A dominating sentiment in discussions on the Notre Dame blaze on Chinese social media is that the burning of the Old Summer Palace by the British and the French, almost 160 years ago, was actually more tragic than what happened in Paris this week.

The historical event that is at the center of online discussions is that of October 18, 1860, when the Anglo-French army, ordered by the British Lord Elgin, burnt to the ground the Yuan Ming Yuan during the Second Opium War (1856-1860).

The Yuan Ming Yuan was the summer palace in the Beijing suburbs that was the main imperial residence of Qianlong Emperor, constructed in various stages from the early-18th century (see Spence 1990, 181). 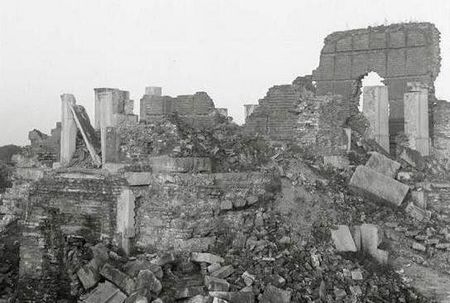 Yuan Ming Yuan after being burned and plundered (via History sina).

Unsatisfied with the Treaty of Nanjing and, among others, demanding more Chinese cities and ports to open for trade, the Anglo-French army invaded Beijing in 1860. They plundered the Yuan Ming Yuan, which consisted of more than a hundred buildings and scenic spots filled with books and art treasures. The burning came afterward, to destroy the evidence of their looting. The fire blazed for three days and three nights, and left the enormous palace grounds in ruins (also see Dr. Ong Siew Chey 2009, 79

All across Chinese social media, many people showed little sympathy for the burning of the Notre Dame, comparing it to the devastating blaze of 1860 that ruined the Yuan Ming Yuan.

One commenter wrote: “A long, long time ago, a group of robbers set my backyard on fire and snatched away the precious treasures. Today, their house is on fire. I am very sorry for the treasures that were lost. But the fire was not started by me.”

Others wrote: “I know I shouldn’t, but I cannot restrain myself: ha ha ha ha ha!” – receiving more than 3200 likes.

Many mentioned the money needed to rebuild the Notre Dame, saying they would not contribute money and instead demanding the French to contribute to the rebuilding of the Old Summer Palace. 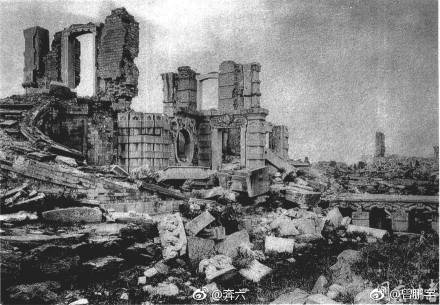 “I have visited the ruins of Yuan Ming Yuan. Therefore, from the perspective of architecture and culture, I feel that the destruction of the Notre Dame of Paris is really a loss for all of mankind,” another commenter wrote: “But from the perspective of our nation, I feel that the French got what they deserve to see this kind of history go up in smoke.”

Despite the general trend on Weibo that puts the Yuan Ming Yuan incident above the Notre Dame disaster, there are also voices criticizing this movement, and many people expressing their sadness over what happened to the historic cathedral.

“This just makes me tear up,” one commenter wrote, with others saying: “Culture belongs to a nation, but also to the world. It just pains me to see these beautiful things disappear.”

Author Zeng Pengyu (@曾鹏宇) writes on Weibo: “Many people say they do not sympathize with the French. I just want to say that historical buildings are innocent: it’s only people who are guilty. Also, when the Yuan Ming Yuan was burned down by the British and French allied forces, the French writer Victor Hugo condemned it. This is recorded in many documents. Born in China today, we should be confident and objective.”

The official Weibo account of the Yuan Ming Yuan park also responded to the controversy on Weibo, simply writing: “We wholeheartedly hope that cultural relics will be able to avert disaster, and pass on their history from one generation to the next.”

Also read: Blazing Memories: About the Comparison of the Notre Dame Fire to the Burning of the Old Summer Palace (Op-Ed)

By Manya Koetse , with contributions from Miranda Barnes and Boyu Xiao