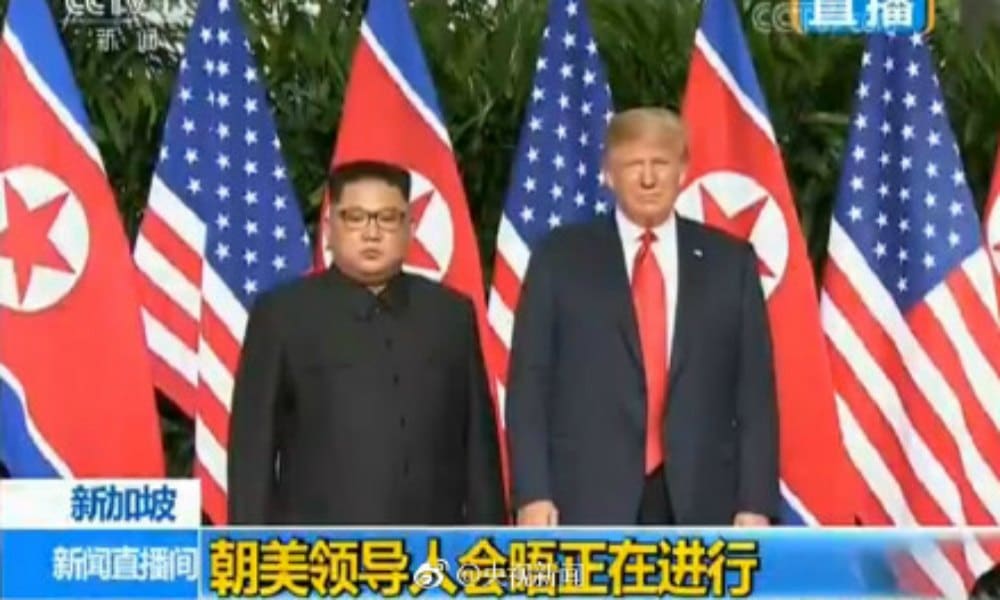 The whole world is talking about the meeting between Donald Trump and Kim Jong-un. The topic was also widely discussed in Chinese online media today. The unusual remarks by one seemingly bored China Daily editor especially stood out.

“The world is going to see a major change,” were the words North Korean leader Kim Jong-un said as he signed a joint document with U.S. President Donald Trump during the momentous Singapore Summit on June 12.

Trump later called his meeting with Kim Jong-un “intensive” and a “tremendous 24 hours.” At the post-summit press conference, Trump also praised and thanked Chinese President Xi Jinping in arriving at this historic day, calling him a “very special person” and “a friend.”

The document signed by the two leaders reportedly is a denuclearization agreement that would provide unspecified “security guarantees” in exchange for North Korea’s “unwavering commitment to complete denuclearization of the Korean peninsula.”

Trump is the first US president to meet a North Korean head of state. With over 30 million views of the hashtag ‘North Korea-US Summit” (#朝美首脑会) on Weibo, the summit became a much-discussed topic in Chinese online media on Tuesday. Discussions on the meeting were also heavily-censored; thousands of comments on the issue were not viewable on many posts.

Chinese state media issued a statement from the Chinese Ministry of Foreign Affairs regarding the summit, calling it an “important progress” in promoting the political settlement and denuclearization of North Korea.

State newspaper Global Times highlighted Trump’s statements during the post-summit press conference regarding the Korean War, saying: “Now we can have hope that it will soon end and it will, it will soon end.” On online front page, Global Times also featured a big photo of the two leaders, writing: “The world watches as they finally meet.” 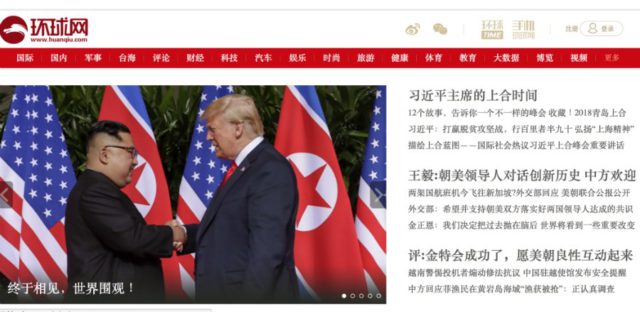 Remarkably, the websites of state media news sites People’s Daily and Xinhua did not feature the meeting on their front page. Instead, their featured news revolved around the Shanghai Cooperation Organization and other China news. 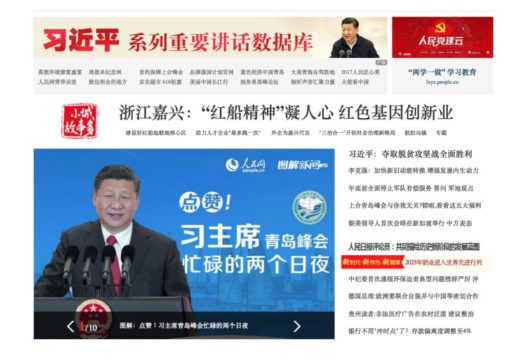 “This is a historic moment that will end up in our history books,” some commenters said.

Others jokingly said: “Did they sign a document with their resolutions to lose weight?” or: “Was this an international hairstyle contest?”

But there were also commenters who were more critical of the summit. “Isn’t it too early to call this summit a success?” a Weibo user (@傻傻滴小栀) said. “These are the two people that nearly set off a Third World War.”

“I always feel like Kim Jong-un is plotting things, and it’s not a good feeling. He is brewing up a plan,” another person wrote.

An unusual online feature on the summit came from China Daily, one of China’s top state news sites, which posted a live-broadcast of the meeting on Weibo, while personally also commenting on it.

Posting from the official China Daily @中国日报 account, they wrote things such as: “Look at that scenery, isn’t it nice?” or: “It’s in Singapore, I’ve never been there,” and: “The live broadcast hasn’t finished yet, so we can’t have supper yet”, also letting readers know that they had not had breakfast and wanted some food. 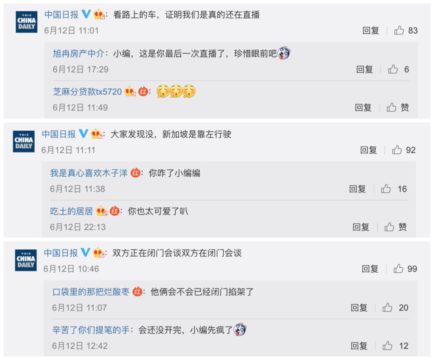 When nothing noteworthy was happening, the editor reminded Weibo followers: “You can tell by the cars driving by that we are, in fact, still live-broadcasting this.” 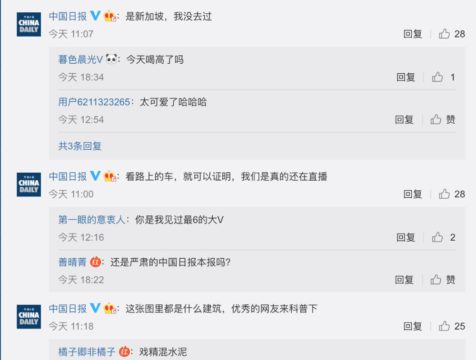 “Hey man, does your boss know you’re sending out messages like this?”, some netizens wondered, while others said: “This editor is really cute,” or: “China Daily has gone crazy.” China Daily has more than 32 million followers on Weibo, and it is highly uncommon for the account to casually chat to their readers this way.

The China Daily post was also one of the few posts where the comment section was not turned off by the editor. “China Daily is sweet, they’re letting us free in talking,” one person commented. Some dubbed the editor ‘Little Live Broadcast Brother’ (‘直播小哥哥’) and wondered if he had eaten yet. “I’m still alive,” the editor said after the lengthy live broadcast.

Besides the banter and cynicism regarding the summit, there are also many who express their sheer joy in seeing this degree of rapprochement between the US and North Korea. “Trump is a hero,” some netizens wrote. Others expressed just one wish for future developments: “I just hope for world peace.”

Related Topics:china and the world
Up Next

Grandpa Picks up the Wrong Kid from School, Takes Him to Get Flu Vaccine