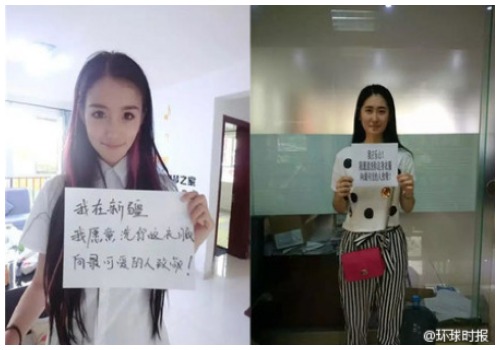 A photo series titled “100.000 soldier-loving girls”(十万恋军女孩) posted by China’s Military Web in honour of soldiers’ aid during the Wuhan flood has triggered online discussions about the way in which it portrays Chinese women.

While many netizens paid their respects to the young soldiers fighting the disastrous flood in the south of China, Chinese state media outlet Global Times elevated this ‘tribute’ to new heights by sharing pictures of girls holding the message “I wish to wash your uniform for you”. 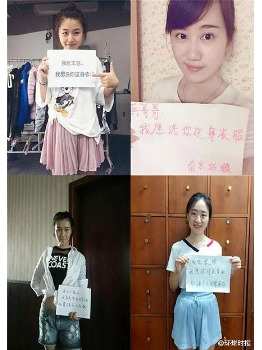 This is not the first time netizens collectively respond to how patriotism in women is portrayed by official media. Earlier this year, a comic that was released by China’s Youth League also caused some controversy.

“Thank you, our angels”

The big flood in Wuhan, the worst since the flood of 1998, has dominated Chinese headlines over the past week. Social media sites overflowed with images of People’s Liberation Army (PLA) soldiers fighting the flood. They showed them walking in muddy water to put sandbags in place, evacuating the young and the elderly, or pictured them sitting on the road side, eating plain buns in muddy uniforms. 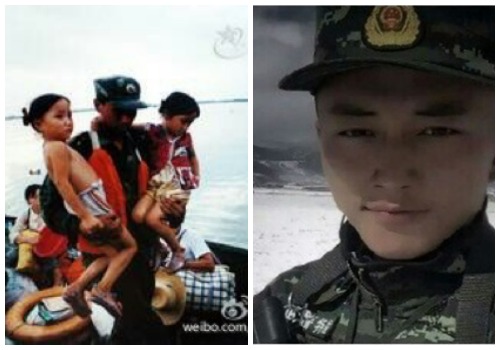 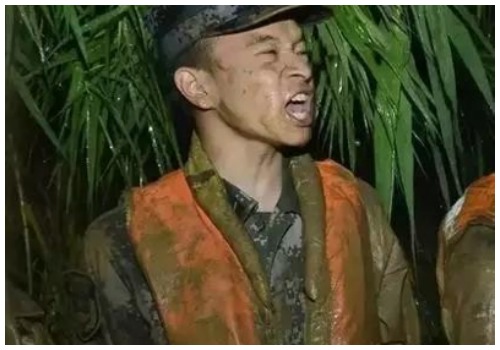 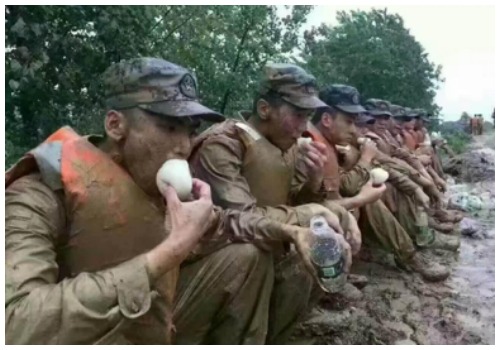 Many netizens praised these young soldiers as China’s present-day heroes: “You always come out the first moment whenever problems arise. Thank you, our angels. Hope you are all safe”, one netizen writes.

“My soldier brother, I wish to wash your uniform for you”

The post features pictures of girls holding the message “I wish to wash your uniform for you” in their hand. 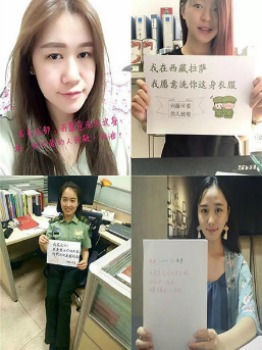 “Our heart goes out to what is happening with the flood, and it also goes out to the young soldiers. What is so touching to us, is your high spirit while confronting the flood; it is your fatigue during brief breaks; it is your running about in the pouring rain. All we want to say at this moment is that we wish to wash your uniform for you – this uniform that has become stained by mud because of all your hard efforts.”

The feminist activist Sina Weibo account Voice of Feminists (@女权之声) responded to the post, saying that “soldier-loving girls seem to have become the most popular ideal female image in the official media.”

“He sticks to his belief. He said it is Communism. I do not quite understand. But I support him.”

In March of this year, another soldier-loving girl went trending online as the central division Youth League released a comic titled “I Am In Love, With Him” (我恋爱了，和他). 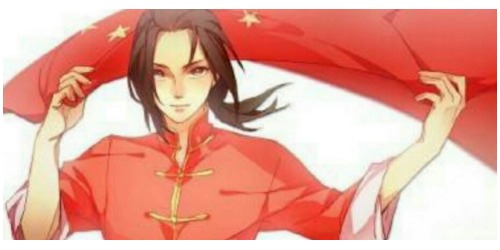 This comic narrated an ever-lasting romance between a woman and a man from the female perspective. The ‘him’ in the comic was depicted as a young soldier. Some of the comic’s narrations read as follows:

“When I first knew him, he was still a poor young man, but I never cared about his poverty.”

“He has an unpleasant past. That is his trauma. He does not want to talk about it, and I am always careful to avoid it. After all, who doesn’t have a past?”

“Sometimes I am attracted to someone else, but that is just for a second! He is forever my idol.”

“He sticks to his belief. He said it is Communism. I do not quite understand. But it sounds fancy. I support him.”

“I love him, for his tenderness, for his assertiveness, for his strong character, and for him always walking straight all the way.”

The comic drew much criticism online. On Chinese question-and-answer platform Zhihu (知乎), many netizens responded to it with sarcasm. The post became so controversial that the original post on Central Youth League’s account was later removed.

Under the Global Times’ post, many netizens also responded with sarcasm or critique: “Attention begging, gender stereotyping – so China”, writes one netizen.

“Where are our female soldiers?”

Many netizens deem the representation of the patriotic female as meek and submissive as insulting to women: “A kind reminder”, says one netizen: “back in the war, when Japanese troops recruited comfort women, they also claimed it was for washing clothes”.

“I wonder who washes the uniforms for our heroines?” one netizen asked.

“The male heroes save the country and resist disasters at the front; the female housekeepers stay behind to do the cooking, washing and providing maternal or female care,” Voice of Feminists author Datu (大兔) writes, summarising how state media construct the female gender in times of disaster.

Despite all controversy, there are also who don’t see what all the fuss is about. As one Weibo user says: “Maybe there are just some girls who really just do want to wash their uniforms!”

The Chinese Embassy stresses that Chinese people should maintain unity and keep helping each other in Ukraine. 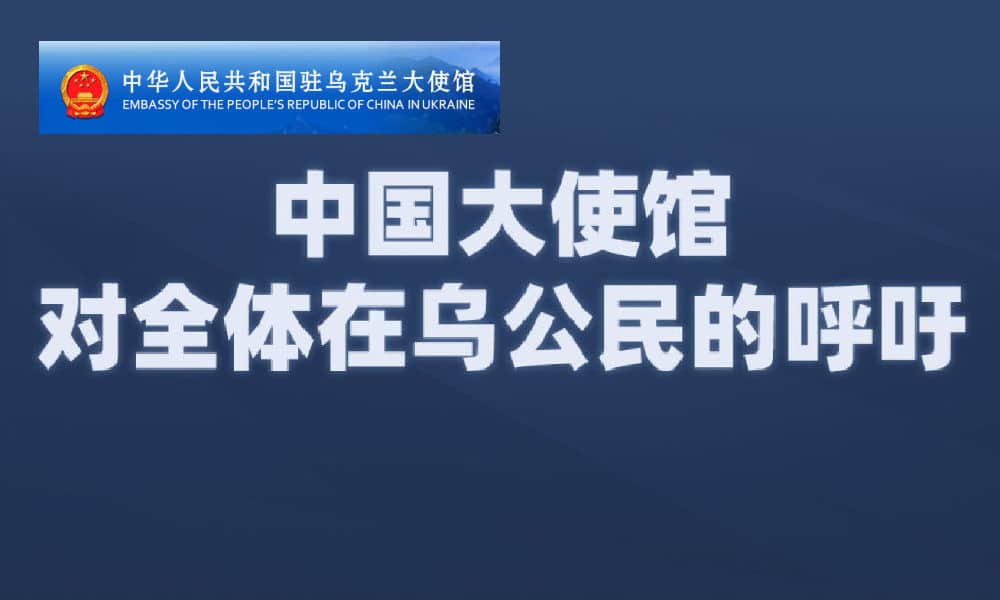 On Monday, February 28th, the Chinese Embassy in Ukraine issued a message to Chinese citizens in Ukraine.

The full message, which was published on social media platform Weibo by the Chinese state media outlet People’s Daily, is as follows (translation by What’s on Weibo):

Chinese Embassy’s Appeal to All Citizens in Ukraine

“At present, with the war between Ukraine and Russia continuing and the battle situation being uncertain, the safety situation in Ukraine is deteriorating and some of our Chinese citizens in Ukraine are running into practical difficulties. In light of this, some Chinese citizens’ associations and individuals have already started to mobilize to do all they can to help compatriots in difficult situations. This kind of assistance has played a positive role in alleviating the difficulties faced by our compatriots.

The Embassy highly praises these voluntary actions and believes that they reflect the fine tradition of the Chinese people being united in struggle, helping those in distress, and helping each other out. Please continue to do so. In the current challenging situation, especially considering the serious disruption to the supply of stores and city traffic, the mutual assistance of compatriots is the most direct, the most effective, and the most warm-hearted. Over the past years, the Chinese nation has continuously been put to the test, especially during an unprecedented covid19 epidemic that has brought huge development challenges. It is by relying on this great spirit of the Chinese people that we, under the leadership of the Chinese Communist Party, can overcome crises and challenges, and can welcome huge victories, which have led to the great glory of present-day China.

So please be sure to continue to help each other and stand united in struggle. Unity is strength, unity is the way out, and only through unity can we overcome the current difficult situation. Chinese people in China are divided into north and south, east and west, left and right, but outside of China, we are all Chinese and we should all be united. No one can be left behind!

– The Chinese Embassy in Ukraine“

Besides this message to Chinese citizens, the Chinese Ambassador to Ukraine also published a two-minute video in which he stressed that the embassy would never abandon its citizens. 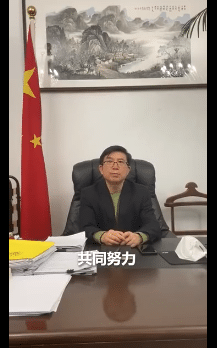 Although many people praised the message that stressed unity and solidarity, there were also some critical voices who wondered why there is no mention of a concrete plan to evacuate Chinese citizens in Ukraine and why Chinese students in Kyiv and beyond were not evacuated earlier.

During a regular press conference earlier today. Ministry of Foreign Affairs spokesperson Wang Wenbin (汪文斌) said that the Ministry is working together with the embassy in Ukraine to explore all options to assist Chinese citizens in Ukraine to evacuate safely, but also stressed that the current situation is very challenging.

According to Chinese media quoting the Chinese Embassy, there are about 6000 Chinese citizens in Ukraine, including students and members of staff of Chinese companies, with the majority of them living in Kyiv, Lviv, Kharkiv, Odessa, and Sumy. Other reports, however (such as this recent one by Sohu), suggest that the latest statistics on the number of Chinese living in Ukraine are outdated and that, not even counting other Chinese citizens, there are already minimally 10,000 Chinese students studying in Ukraine.

Many see the presence of the US warship in the Taiwan Strait as a provocation. 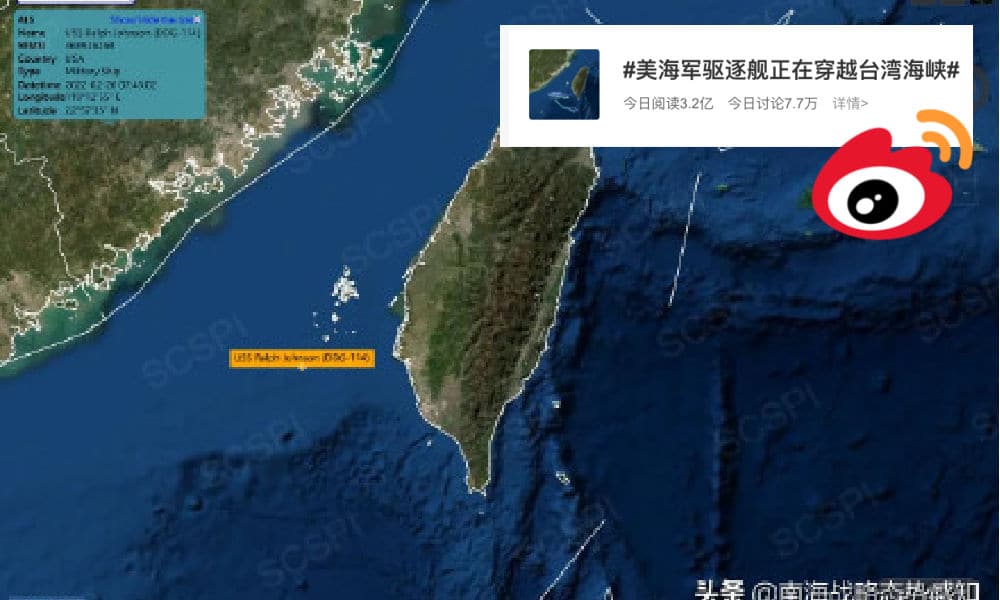 Trending on Weibo now with over 320 million page views at the time of writing is the US Navy destroyer Ralph Johnson (拉尔夫·约翰逊) passing through the Taiwan Strait on Saturday afternoon, February 26 (#美海军驱逐舰正在穿越台湾海峡存#).

The topic hashtag page was initiated on Weibo by state media outlet Global Times, with one of their posts on the issue receiving thousands of comments and over 500,000 likes. 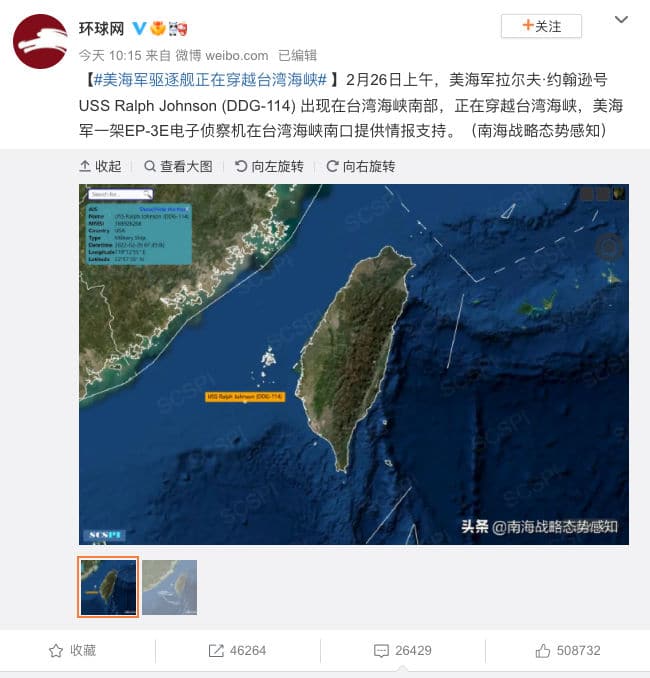 Many responses underneath the post, which reported the US Navy destroyer transit through the Taiwan Strait, were anti-American:

– “This world would be a better place without America.”

– “The whole world should unite against the US.”

Others posted videos showing the spokesperson of the Ministry of National Defense saying that the People’s Liberation Army (PLA) will resolutely fight “Taiwan independence” forces and that as long as provocations regarding “Taiwan independence” do not stop, the PLA will continue to defend China’s national sovereignty and territorial borders.

These remarks were made by the Ministry of National Defense during a regular press conference on February 24.

Over the past few days, Taiwan has become a recurring topic on Chinese social media in light of the Russian invasion of Ukraine, with some bloggers writing that “Ukraine is being beaten, [but] it is Taiwan that should be afraid” (“乌克兰挨打，该害怕的是台湾!”), drawing parallels between Ukraine and Taiwan and saying that the speed of the Russian offensive should be a warning to Taipei.

At the time of writing, the Weibo hashtag page did not include any information about the passage of the Ralph Johnson being a “routine activity”, as it has been described by the American military.

The US Navy destroyer Ralph Johnson is carrying out a routine transit through the Taiwan Strait. Long planned.

Many on Weibo think that the US is getting nervous. “The United States is really scared that mainland China will seize this opportunity to take Taiwan while the world’s attention is on Ukraine,” one person writes, with another Weibo user asking: “Was provoking Russia not enough for the US?”