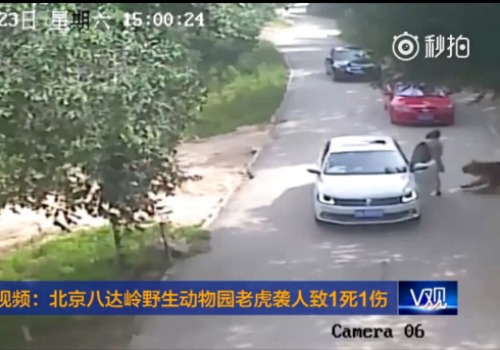 Investigation of the incident where a woman was attacked by a tiger when she got out of the car at the Badaling Wildlife Park (八达岭动物园) in Beijing this summer has been completed. It concludes that the wildlife park is not to blame.

On July 23, 2016, a visitor of the Badaling Wildlife Park in Beijing was attacked by a tiger when she got out of her car in the safari area of the zoo. When the woman was dragged away by the animal, her husband and mother also left the vehicle to come to her rescue.

News of the tragedy soon triggered discussions on Sina Weibo about the safety at Badaling Wildlife Park, a zoo where the director was killed by one of the elephants in March. In 2009 and 2014, two other persons were also attacked and killed by one of the zoo’s tigers. Many netizens wondered who was to blame for the fatal incident: was it the zoo or its visitors?

Footage shows the woman leaving the car and being dragged away by a tiger on July 23.

The incident’s investigation team has now completed its report, of which the results were made public earlier today. The reports identifies the following reasons for causing the incident:

First, Mrs. Zhao did not comply with the Badaling Wildlife Park’s strict guidelines not to leave the car, which led to her being attacked and wounded by the tiger. Second, the woman who got out of the car to save her daughter (Mrs. Zhou) also did not follow the park’s rules that strictly prohibit anybody from exiting their vehicle, resulting in her death.

The report states that before entering the park’s wildlife area, visitors are clearly informed of the park’s rules by the zoo’s staff and through leaflets. Those who drive into the wildlife park with their own car, like Mrs. Zhao, also have to sign a waiver of liability. The park has clear warning signs telling visitors not to exit their vehicle, and that park rangers will come to the rescue in case of an emergency.

The investigation team therefore concludes that the Badaling Wildlife Park bears no responsibility for what happened on July 23.

The fatal minutes on July 23

The report describes how the family, consisting of the woman Mrs. Zhao, her husband Mr. Liu, her mother Mrs. Zhou, and their 2-year-old infant, entered the park at around 14.00 on July 23rd. Before entering the premises, they were informed of the park rules, which, amongst others, state that visitors cannot leave their vehicles, feed the animals or open their car windows. They also signed the waiver.

At 15:00, Mrs. Zhao exited the car on the passenger side to change seats with her husband, who was driving the car. When park rangers saw her exiting the car, they honked to warn her to get back in the car. The two vehicles behind their car also honked to alert the woman, who was soon dragged away by the tiger who had come up behind her. Mrs. Zhou and Mr. Liu also left the vehicle to go after her. Park rangers immediately drove to the scene and asked for assistance. This whole scene took place within a time frame of less than half a minute.

As two park patrol cars arrived at the scene, Mr. Liu asked the drivers to get out of their cars to help. In accordance with park rules, they ordered Mr. Liu to get in the car immediately and to leave the scene, which he did at 15.02. Within the 14 minutes that followed, park rangers restrained a total of ten tigers by leading them into cages and the tiger habitat so that they could safely exit their vehicles. By 15.16, they found that Mrs. Zhou no longer had a pulse, while Mrs. Zhao was still alive, although her face was severely mauled.

The two women were immediately brought to the hospital, where they arrived at 15.44. The 57-year-old Mrs. Zhou was officially pronounced dead at 17.12. The 32-year-old Mrs. Zhao could be rescued despite her severe injuries, and by now has been discharged from the hospital.

Although the report does not hold Badaling Wildlife Park liable for the incident, it does stress that the park needs to further increase the safety of visitors by strengthening awareness of the existing rules, and emphasizes that park rangers need further training on how to respond in the case of emergency.

On Weibo, the completed investigation results were soon shared amongst netizens, receiving thousands of comments within a couple of hours.

The majority of Chinese netizens seem to agree with the report’s outcome.
“The zoo nor the tigers are to blame!” they respond with smileys and happy emojis.

“It is so clear how this happened, did they really need such a long time to investigate?”, some commenters wonder. “The outcome is fair!”, is what many Weibo users say.

But not everybody agrees with the report. “Firstly, a wild life park should not be used for people’s entertainment,” one netizen says: “Secondly, if a mother sees her child being dragged away and exits the car to help her, can you still blame her for not following the rules?”

Related Topics:BeijingChina Beijing
Up Next

“Without Limits, There is No Freedom” – Controversial French Burkini Ban Goes Trending on Weibo