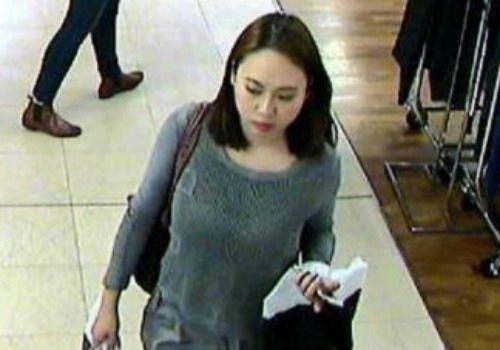 The recent mysterious murder of the 25-year-old Chinese Michelle Leng, who studied in Sydney, has become a much-talked about case on social media, both in China and in Australia. Local police are still puzzled about what happened to her. [Updated: according to Sydney Morning Herald, a man who is believed to be Leng’s uncle was charged with her murder on Friday, April 29].

The 25-year-old international student Michelle Leng (Mengmei Leng, 冷梦梅) from Chengdu was reported missing by a Weibo user on Tuesday, April 26. According to the Weibo message, the woman was last seen by her friends on Thursday, April 21st around 3.00 pm in central Syndey, where she said goodbye to them at a bus stop.

Leng had been living in Australia as an international student for five years. Although her sudden disappearance was deemed “very unusual” by her friends and family, they did not formally report her missing until Monday, four days since she was last seen.

According to China’s WMG News, the message that Leng was missing attracted much attention from netizens who helped spread the news of Leng’s disappearance on Chinese social media.

At the same time, a New South Wales police station issued a public notice on Wednesday, April 27, that they were looking for people to help confirm the identity of a deceased woman whose naked body was found on Sunday near a tourist area on the New South Wales Central Coast near Snapper Point. On Friday, April 29, the body was confirmed to be that of Leng.

ABC News reports that Leng was found floating face-down in the water at a blowhole with several stab wounds in the neck, indicating a violent attack. 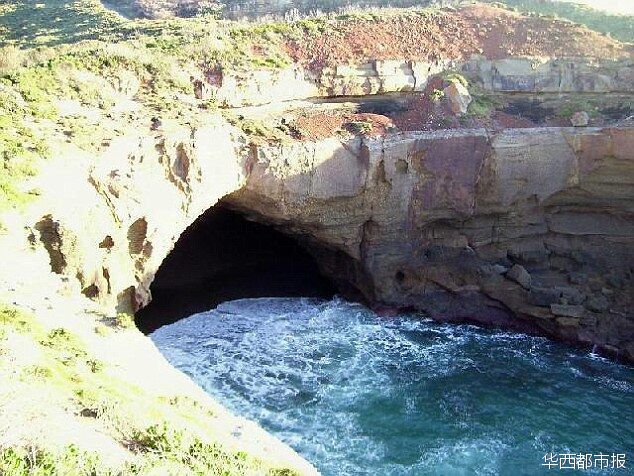 The location where Leng’s body was found (Daily Mail).

Leng lived with her aunt, uncle, and cousins in Campsie, a suburb in southwestern Sydney. Her mother and brother are living in China. According to VOIS magazine, Michelle Leng studied at the University of Technology in Sydney. 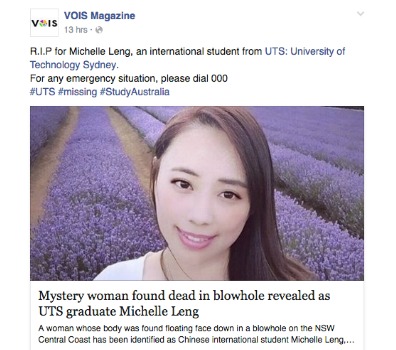 As police is still investigating what happened to Leng, they released CCTV footage of her shopping in central Sydney’s Pitt Street on April 21st. Australian police asked people who have any information about Leng’s whereabouts between April 21st and April 24th to come forward. 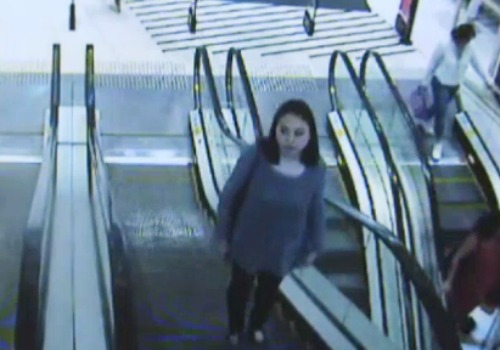 The place where Leng was found on Sunday is some 277 kilometers (172 miles) away from the central part of Sydney where she was last captured on CCTV camera.

• Thursday, April 21 – Michelle Leng says goodbye to her friends at a bus stop in central Sydney and goes shopping at Pitt Street Mall, takes train ride home to Campsie.
• Sunday, April 24 – Woman’s naked body found at Snapper Point on the Central Coast, some 277 km from central Sydney.
• Monday, April 25 – Michelle Leng is reported missing by her relatives.
• Tuesday, April 26 – News of the disappearance of Michelle Leng gets attention on Chinese social media, as an acquaintance of the family posts about it.
• Wednesday, April 27 – Australian police issues public notice about the body found at the coast.
• Friday, April 29 – The body of the woman found at Snapper Point is confirmed to be that of Michelle Leng.
• Friday, April 29 – Police arrest the 27-year-old uncle of Leng and charge him with her murder.
• Saturday, April 30 – The suspect is scheduled to appear at Parramatta Bail Court.

On Facebook, Michelle Leng became the focus of speculation on Friday, with some media saying she had arrangements to meet someone she knew from social media on Thursday night – although this has not been confirmed. Other Facebookers take Leng’s case as a warning for all international students to look out for each other and call the police when they think they are being followed.

Many Weibo netizens are currently also discussing Leng’s case under the hashtag ’25-year-old Chengdu Woman Murdered in Syndey’ (#成都女孩悉尼遇害#). While most sympathize with Leng and her family, there are also those who say the girl only went to study abroad to get a “fake diploma”. One netizen comments: “What scares me more than this murder is how people comment on it. A Chinese girl has met great misfortune while studying abroad. And suddenly ignorant masses are compelled to say she was ‘buying fake credentials’ and other things that have nothing to do with it.”

“This is so tragic, I hope they solve the case soon,” another netizen said.

Although Australian SBS news initially reported that Michelle Leng’s killing was still a ‘puzzle’ to local police, the Sydney Morning Herald later reported that a man who is believed to be Leng’s uncle was arrested for her murder on Friday.