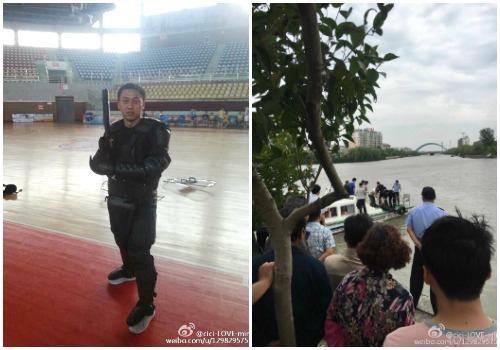 The mysterious death of police officer Zhang Jiyong (张际勇) has caused a clamor of rumors growing on Chinese social media, with thousands of people questioning his cause of death. This is the second time this month that lack of transparency in the police force and failures in criminal investigation become the focus of public attention.

Zhang Jiyong (张际勇), a 34-year-old traffic police officer from Jiangsu province, suddenly disappeared while on duty on May 17. After being missing for 64 hours, his dead body was found in a nearby river on May 20.

His wife turned to social media to bring her husband’s case to the public’s attention, posting her story and pictures of her deceased husband’s face. Since his face showed traces of blood, severe bruisings and swellings, she alleges her husband was beaten to death [picture link, warning: death, shocking image].

But according to police and medical experts, Zhang died from drowning and there were no signs of homicide – pointing to suicide.

According to iFeng news, Zhang’s wife denies her husband was suffering from any kind of depression or other mental disorder that could have been related to his death.

Under the hashtag of ‘The Wife of Murdered Civil Policeman Zhang Jiyong’ (#遇害民警张际勇妻子#), netizens called on Weibo users to make this topic trending to help Zhang’s wife in her struggle to “find justice”. It hit the number one spot in Weibo’s trending topics list on May 24.

The case has caused a clamor of rumors growing on Chinese social media, with some linking his death to his involvement in exposing a drugs crime; according to several Chinese media, Zhang’s wife stated that her husband spoke of ‘being followed’ and fearing for his life two days prior to his missing in relation to this drugs investigation.

There are also netizens alleging that Zhang’s hands were tied together when his body was recovered from the water (picture), and that suicide would thus be impossible.

Mostly, the case unleashed a storm of criticism from Chinese netizens about a lack of transparency in the police force and failures in criminal investigation.

Earlier this month, the curious death of Lei Yang also became big news. Lei Yang was a young man from Beijing who died after he was arrested for allegedly visiting a brothel. His wife also demanded that police further investigated this case, as she alleged her husband was beaten to death during his arrest. This case resonates with that of Zhang Jiyong, where netizens and relatives also ask for further investigation into the case.

“You all say Zhang Jiyong had mental problems, but you were with him at work on the night of the crime, and you’ve confirmed that he acted normal, and that there were no abnormalities up to his death. Yet you give a mental illness as the final conlusion. How can you, as law enforcement, make such logic errors? I ask a public apology from you. And if you won’t apologize, I ask that you come up with evidence for the claim that Zhang was suffering from mental problems. As a family member of the deceased, I have the right to defend Zhang Jiyong’s integrity and honor!”

Except for anger about information lacking, as in the Lei Yang case, netizens are also angry about their comments being deleted by censors. As one popular comment says:

“I think I speak for everyone when I ask: why are our comments being removed? (..) A good policeman was killed, his hands were tied when his body was found, yet the officials still say it is suicide, do you think people are stupid? ? If you have a soul, then why delete our comments? We love our country, let our country love us back!”

For now, since officials have ruled out homicide and have concluded Zhang’s death to be due to ‘death by drowning’, there are no indications that the police will seek for any possible suspects in this case. According to local police, the blood and swellings in Zhang’s face were a “natural reaction” of the body after being in the water for a long time.