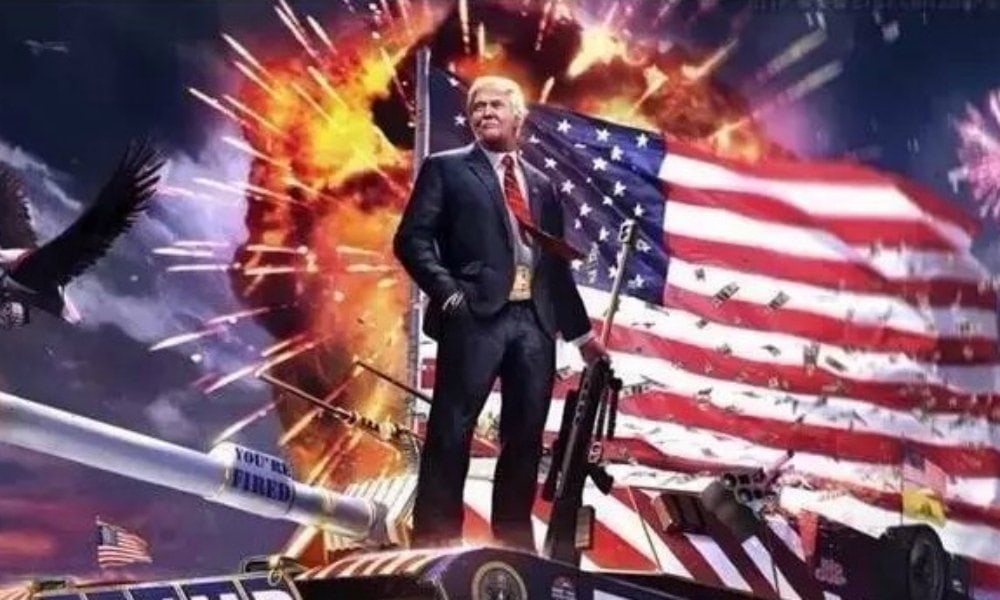 This image, used on Weibo by netizens, is actually made by artist 'Sharpwriter', who sells their prints via via Etsy.

In a response to Trump’s plans to impose tariffs on $60bn of Chinese imports, China’s Communist Youth League has published a Weibo article that suggests that the nearing US-China trade war is similar to the Japanese invasion of China during WWII. Its main message is that China will not appease.

After Trump announced plans to impose tariffs on Chinese goods last Thursday, Chinese social media users have been feverishly discussing this topic, with some calling for a boycott of American goods.

In a telephone conversation between China’s vice premier Liu He and US Treasury secretary Steven Mnuchin on Saturday, Liu reportedly said that he hoped the two countries would be able to maintain stable trade relations, but that China is also ready to defend its interests and take countermeasures.

One online movement dubbed ‘Counterattack the Trade War’ (#反击贸易战), initiated by state-run media platform Xinhua, had received over 55 million views on Sina Weibo by Saturday night (Beijing time). The hashtag intro states: “We do not want a trade war with America, but we certainly do not fear it.” 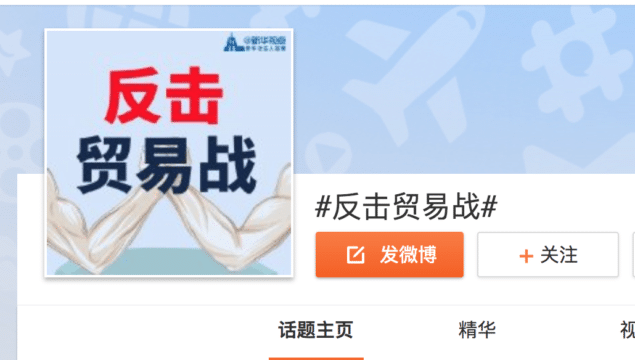 In the article, the Communist Youth League writes that it seems that “at the society level,” “some ordinary Chinese do not have a clear understanding of what a ‘Sino-US Trade War’ actually is.” It, therefore, lists six points to clarify the nearing trade war and China’s position in it. 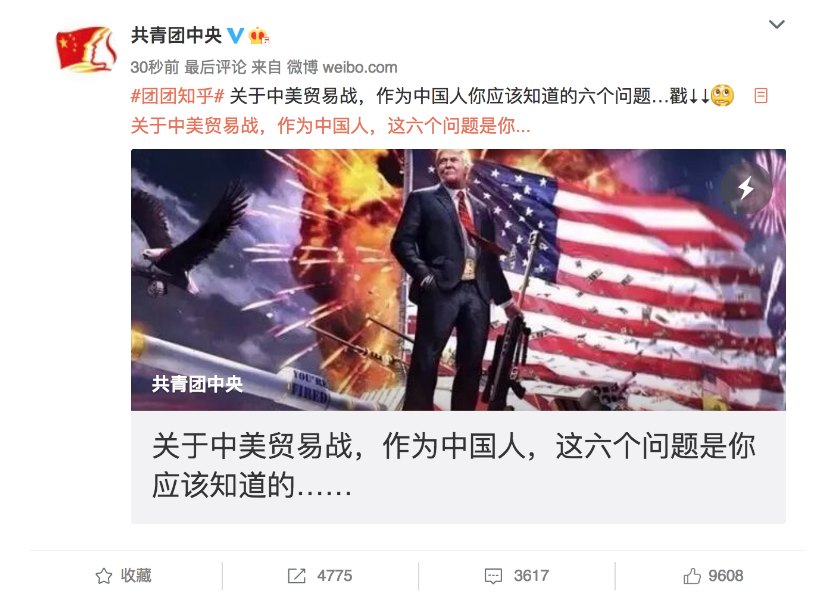 In its first point, the Communist Youth League compares the US trade war to the Japanese invasion of China:

1. CHINA IS UNDER ATTACK BY THE US AND WE CAN’T APPEASE

“The Sino-Us trade war is a unilateral and provocative trade war that damages international trade regulations. Clarifying this issue should be the basis of all discussions: this is not what China provoked, this is not what China wanted, it is the US Trump administration that has violated international rules and has forced this on China. In other words, it is like the Japanese invasion in the past*; it is not something we could have solved through Manchuria or North China. We are only deceiving ourselves if we think we can reach peace through appeasement or by surrendering. In the face of interests, the desire of a businessman can never be satisfied.” 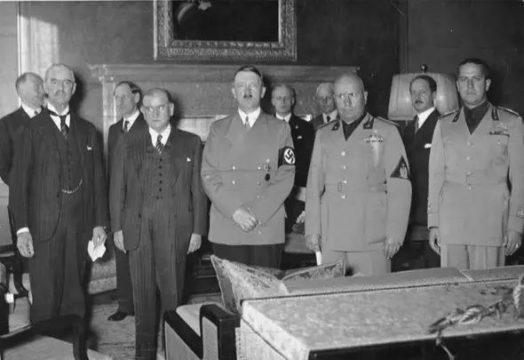 The photo posted by Communist Youth League accompanying its article, writing: History proves that appeasement does not bring peace”.

2. CHINA IS READY FOR WAR, AND YOU SHOULD TRUST THE GOVERNMENT

“China is fully prepared for a trade war,” is the second main point made in this article, in which is stated that China has done its homework and is ready to face any challenges a trade war might bring. “Trusting and supporting the Chinese government is the right thing to do know for us,” the Youth League writes.

The third point made here is that for China, “the law is the bottom line,” claiming that China will counterattack any actions made by the US, but that it will strictly follow international laws in doing so. The article also says that “Chinese and American citizens should not suffer due to the short-sightedness of its politicians.”

4. CHINA IS NOT THE ONLY COUNTRY VICTIMIZED BY TRUMP

The fourth point stressed here is that it is not just China that is victimized by Trump’s decision to impose import tariffs on foreign goods; other countries will also have to deal with these measures and their consequences – and they are China’s allies. China Youth League states: “This [action] may benefit the [US] commercial economy in the short term, but in the long run, it is just a sign of the continued decline of the American Empire,” which is doomed to fail.

5. A TRADE WAR WILL EVENTUALLY BACKFIRE ON THE PEOPLE OF THE US

“The outcome of any economic war, but especially one between world leading countries such as China and the US, will impact the wellbeing of the Chinese and American people, and can even bring a blow to the global population,” the fifth point says, stressing that Trump is making a wrong choice by initiating this ‘war’, which will cause economic disaster. If China is affected, the article says, then it will unavoidably reciprocate in the US and seriously impact its people. “The Chinese government will do its best to avoid this situation,” it says: “But if it does happen, then let’s please choose the same enemy and support the Chinese government because, as stated in the first point, this war is not what we want. It is what the Americans want.”

6. THE CHINA THREAT IS AT THE ROOT OF THIS ATTACK

In the last point, the Communist Youth League writes that behind the “China-US trade war” lies American fear over the rise of China. This US fear of a changing international community where China plays an increasingly more important role will keep on surfacing, the article says. It will show itself through the South China Sea dispute, an economic war, or Taiwan travel laws. “China needs to be prepared for this mentality,” it concludes.

By Saturday night, the article was viewed more than 3,7 million times and received thousands of comments – many supporting the “firm stance” of the article. “You can’t bully China,” a typical comment read: “We have a strong country.”

Copyright for featured image belongs to the artist Sharpwriter. Prints for sale: via Etsy.

Is This the End of Huawei Goes America?