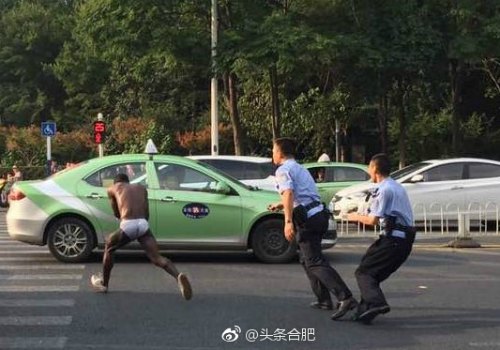 Photos of the arrest of a black man in Hefei triggered waves of racist remarks on Weibo this weekend. Online racism against Africans has been an ongoing issue on Weibo ever since the platform was first launched.

On August 4, police in Hefei, Anhui, arrested a black man in the city for “causing trouble” and “picking quarrels.” The man reportedly injured another person on the street.

Photos of the incident made their rounds on Chinese social media on August 5. Hefei Headlines (@头条合肥) was one of the accounts sharing the news on Weibo with the headline “Black Man Causing Trouble in Hefei” (“黑人男子合肥寻衅滋事”). 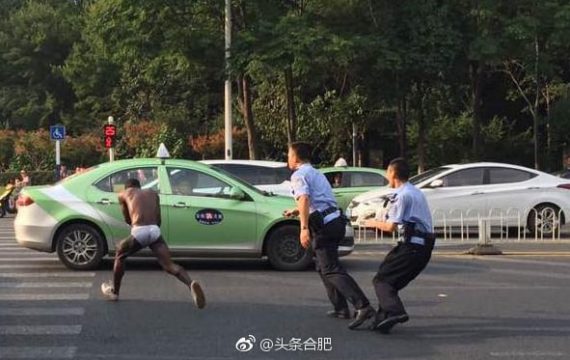 The incident occurred around 4 pm on Fanhua Street, right before the Foreign Languages College. In the photos that are making their rounds on Weibo, the man can be seen running from the police, wearing nothing but underpants and sneakers. 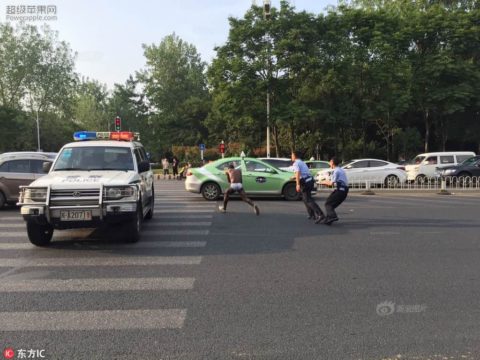 It is not clear what triggered the incident and what the man exactly did, nor are there any reports on where the man comes from or whether he is a student at the college. 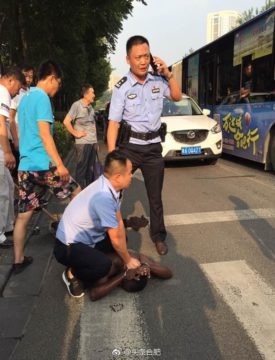 The photos triggered two types of responses on Weibo: on the one hand, there were those people who just praised the police for the work they are doing and risks they are taking, and on the other hand, there were large numbers of netizens who made racist remarks about the black man. 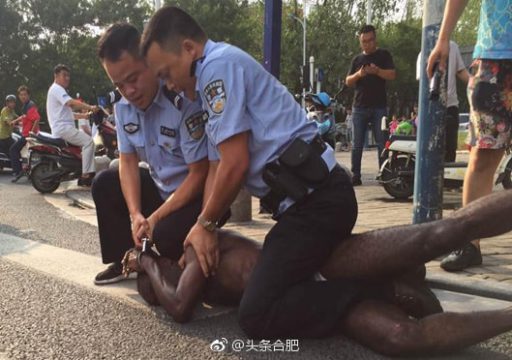 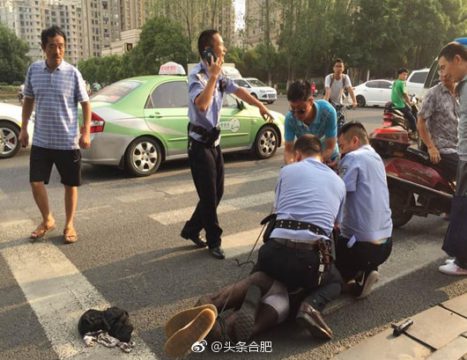 “Black monkey go back to Africa,” or “black trash” were typical comments amongst the thousands of reactions on Weibo.

“There are so many black devils in Guangzhou, and they bring AIDS with them, it’s disgusting,” one person said. Guangzhou has the largest black community in China.

Online racism against Africans has been an ongoing issue on Weibo ever since the platform was first launched in 2009. At the time, an essay about the racism against Chinese in Africa drew much attention. In 2013, Weibo was flooded by news of Chinese being killed in Ghana.

The existing idea that Chinese are looked down upon in Africa has allegedly worsened anti-African sentiments in China, although there are also those who already warned in 2013 that “the denigration and discrimination of black people [in Africa by the Chinese] is spreading like an epidemic.”

In “From Campus Racism to Cyber Racism”1, scholar Cheng (2011) argues that anti-black racism in China has re-emerged with China’s deeper economic involvement in Africa, due to which large numbers of Chinese and Africans have come to work in each other’s countries.

Cheng writes that although there already were waves of racism against Africans in the early post-Mao era, it has resurfaced over the last decade with the rise of China as a global power. Given that there are still many regarding Africans as “racially inferior,” “these people think it is wrong for Africans to create social problems in Chinese cities and impede China’s actions in Africa” (561)1.

But on Weibo, there are many who take the issue of racism in China lightly, comparing it to other countries: “If this were America, this guy would have already have been shot and killed.”

“We have no racism in China,” one commenter says: “We just have a distinction of good versus evil.” Others had similar jokes, saying: “There are only two types of people I can’t stand: 1. racists and 2. black people.”

Despite all racist slurs and racist jokes, there were also those who had a serious message for all foreigners: “There are many foreigners from wherever who don’t take Chinese law seriously. I don’t care where you are from, but you have to abide by the Chinese law if you’re in China.”

It is unknown how long the man will be detained.

After A4 Waist and iPhone6 Legs, Here Is the ‘Heart-Shaped Boob’ Challenge