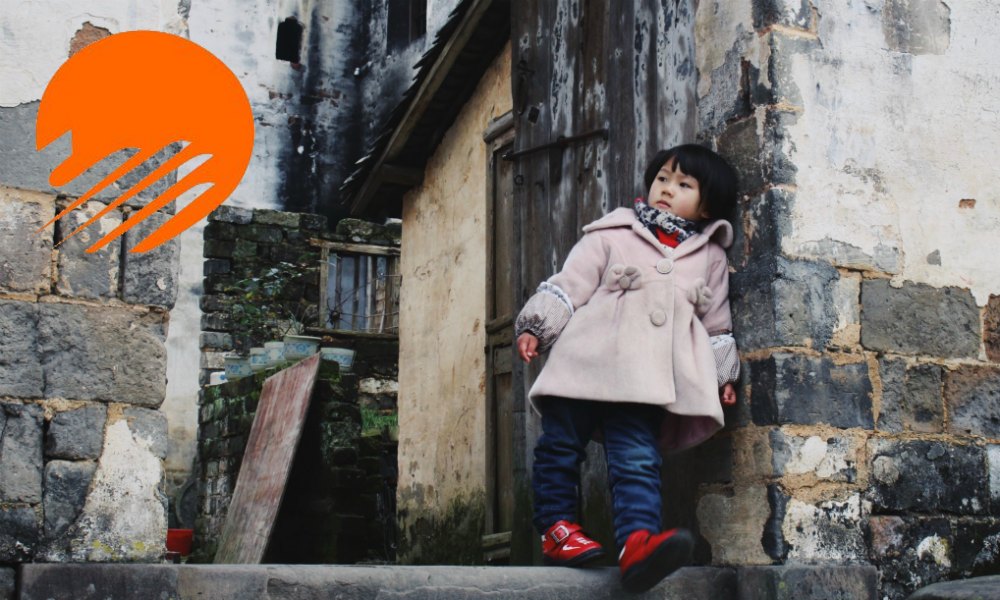 A charity fund that was supposedly dedicated to girls’ education in rural China has been found to fund the education of boys, triggering anger online.

The Chinese charity “Spring Buds Program” (春蕾计划), a project meant to advance girls’ education launched by the CCTF (China Children and Teenagers’ Fund 中国儿童少年基金) has come under fire for providing financial aid to schoolboys in China.

The “Spring Buds” project, which falls under the All-China Women’s Federation, has received the China Charity Award in the past for its efforts to promote girls’ education. The program was launched in 1989 to help girls in China’s impoverished rural areas to go to school, improve literacy rates among China’s young girls and women, and empower girls to strengthen their influence in their local communities.

This week, the charity’s focus has come under scrutiny after it became known that of the 1267 students receiving financial aid as part of one of ‘Spring Buds’ scholarship programs, there were 453 male students.

Some commenters argued that boys, even in impoverished areas, are generally still better off than girls due to a persisting gender preference for boy children.

Weibo users also pointed out how there are multiple non-gender specific charity programs in China, and that ‘Spring Buds’ is one of the few focused on girls only – arguing that it should thus also really be assisting solely girls.

As the news about ‘Spring Buds’ coincided with this week’s launch of the Global Gender Gap Index report, some Weibo users also wondered why Chinese official media would quote this report and mention Japan’s worsening gender equality, while not mentioning anything about the status quo of gender equality in China.

The CCTF responded to the controversy via their official Weibo account on December 17th, stating that although its program was initially focused solely on girls, this year’s project funding was also allocated to impoverished male students who needed “urgent help.”

The organization further noted that they will be more transparent to charity donors in the future about how their funds are allocated.

Although the hashtag “Anger over Spring Bud Project Subsidizing School Boys” (#春蕾计划资助男生引质疑#) was used on social media by several Chinese media outlets to report the issue, the hashtag page is no longer accessible on Weibo at time of writing.

“Tonight is the night when students are flooding the internet,” some on Weibo said during a dark night filled with students’ bright lights. 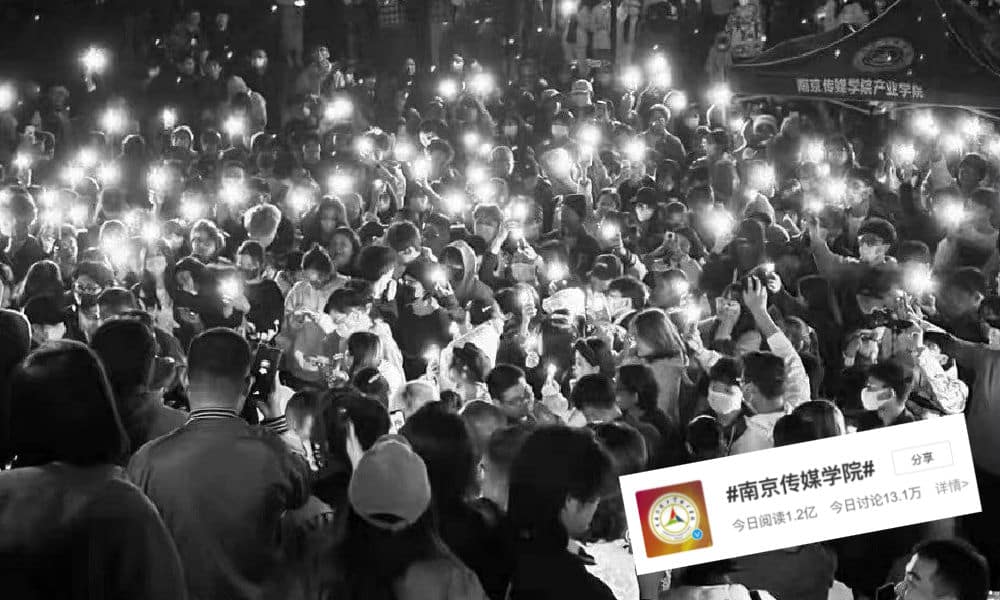 The Communication University of China in Nanjing (南京传媒学院, abbr. CUCN) is trending on Weibo on Saturday night, with one hashtag receiving over 180 million views on Weibo before 23:00 local time.

Students at the university gathered on Saturday evening, chanting slogans such as “long live the people” and turning on the lights on their phone as a tribute to victims of the fire in Urumqi. 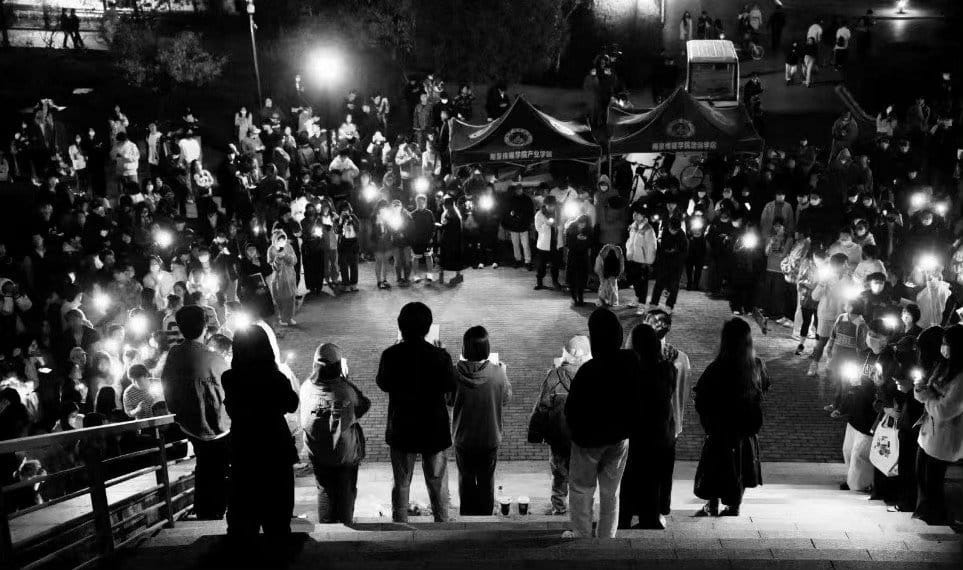 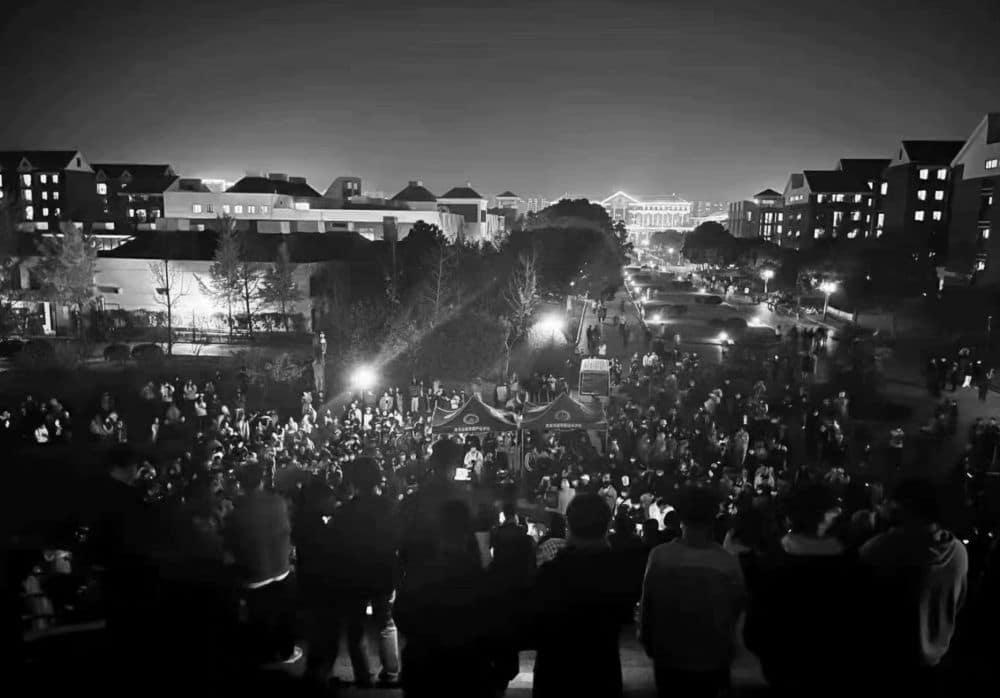 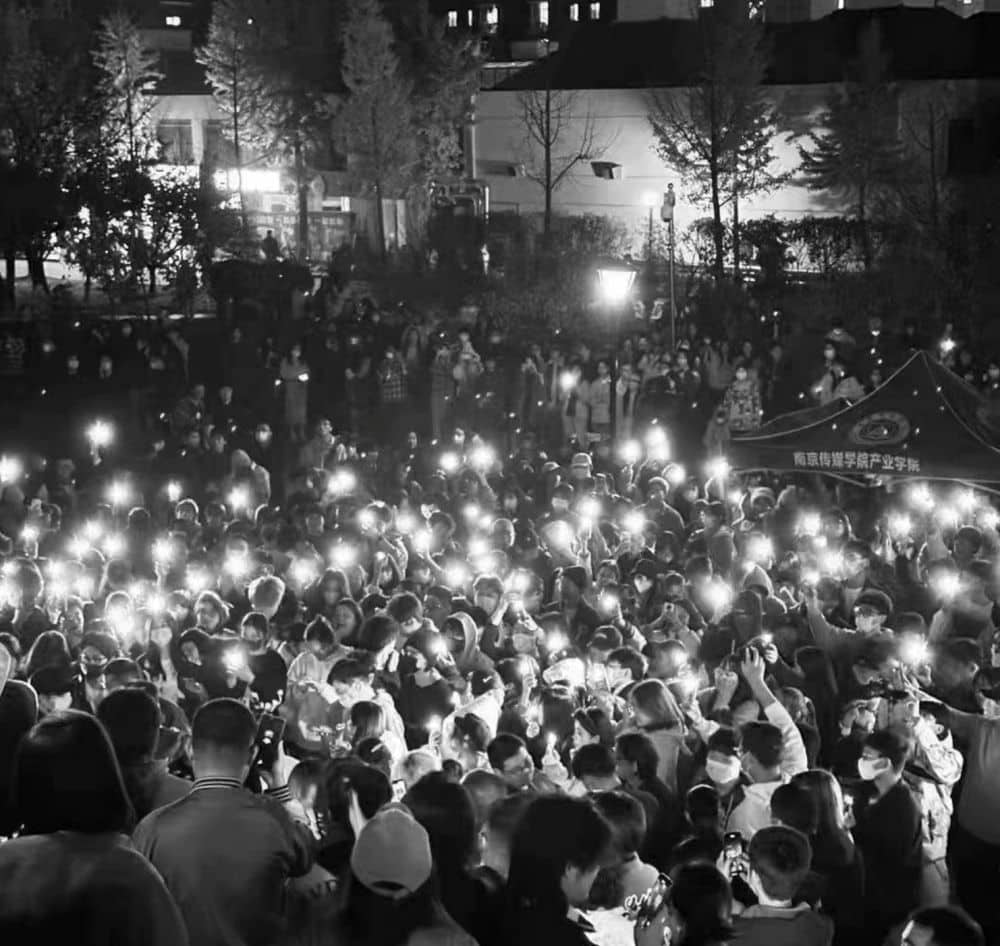 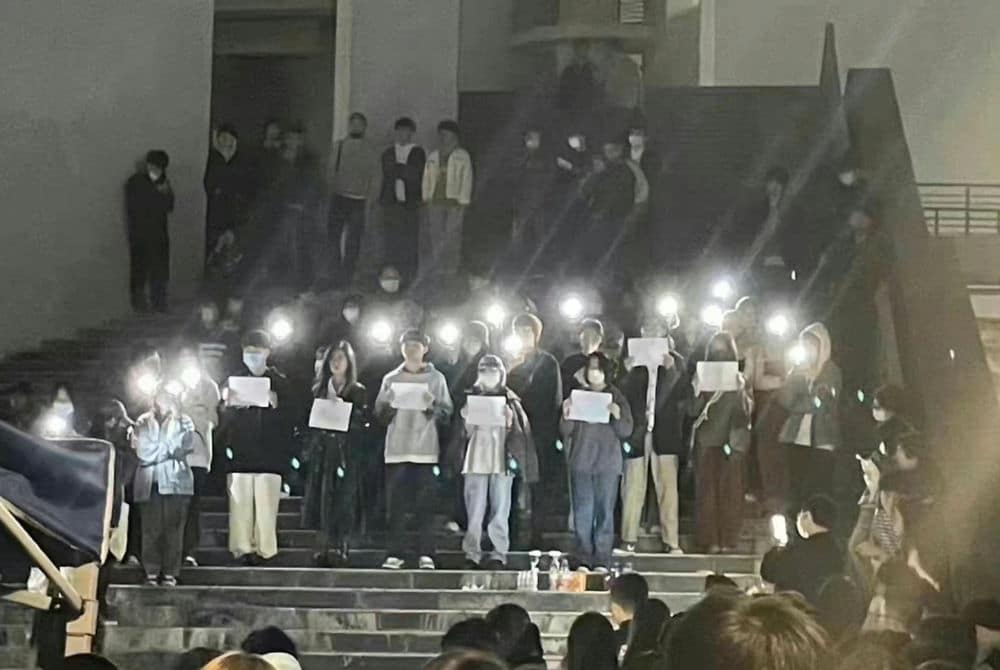 Over the past few days, there has been ongoing unrest in various parts of China. The fire that occurred in Urumqi on November 24 triggered waves of anger online (read here), and at the same time there have also been other incidents that further intensified the anger, which some also took to the street.

Another incident that attracted a lot of online attention this week happened in the Shunde District of Foshan, Guangdong, on November 24. Online, the incident was referred to as a “stampede,” but the hashtag “Foshan Stampede” (#佛山踩踏#) was soon taken offline. According to China Daily, the incident happened when a crowd of people gathered at a Covid testing place in the Xincheng community of Leliu subdistrict at about 8:30 am. The situation became chaotic when people fell down due to the slippery ground, but nobody reportedly was injured. 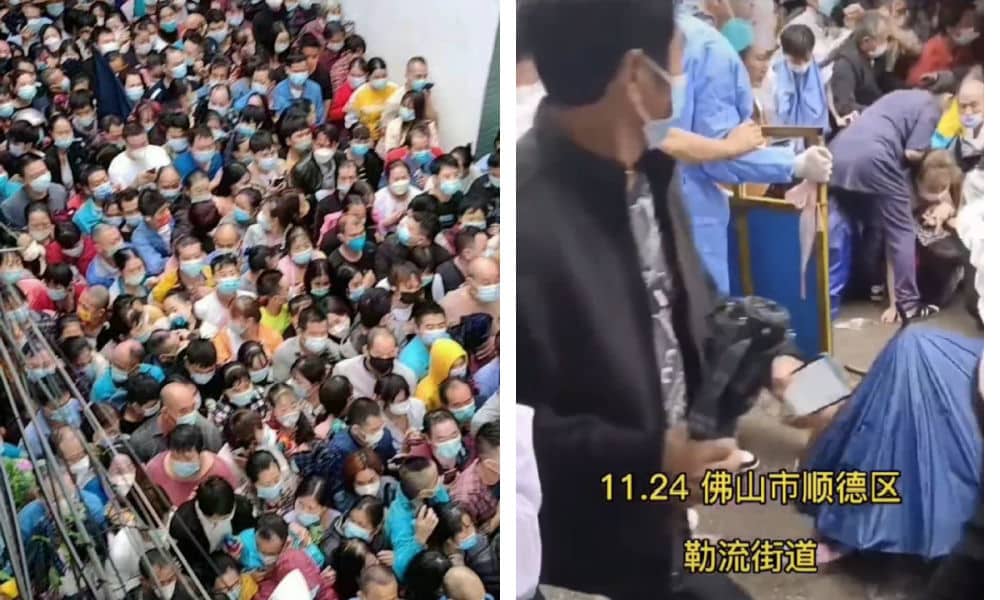 Nevertheless, the incident surely did not help to calm the growing tensions, especially this week when we also saw protests and unrest at Foxconn in Zhengzhou and the third consecutive daily record for new Covid cases in mainland China following by local (semi-) lockdowns across the country.

Meanwhile, on Saturday night, Weibo flooded with comments in support of the students who stood up to make their voices be heard.

“I’m not there with you, but I’m there with you,” one commenter wrote, with others posting: “Brave young people. This society is no longer giving them a way to live. History is repeating itself. If we don’t do this now, it’s our children who will have to struggle.”

“CUCN come on!” some cheered, while others wrote: “We’re proud of you.”

Some screenshots claiming to come from people at the scene said that it was the students’ intention to show solidarity with the people who passed away in the Urumqi fire and those in Xinjiang who were treated unfairly in light of the ongoing lockdowns the region saw since August of this year.

An anonymous poster warned people not to believe rumors regarding the protest being a conflict between the school leadership and the students: “The school is protecting its students, although some on the internet would like you to believe otherwise.”

Lights at the CUCN scene were allegedly turned off to prevent students from being identifiable on videos and photos.

As soon as the live commenting section on the CUCN protests was shut down by Weibo, another topic came up before midnight.

Students at the Xi’an Academy of Fine Arts (西安美术学院) were also taking their anger to the campus streets, where they allegedly demanded for freedom amid Covid lockdowns. 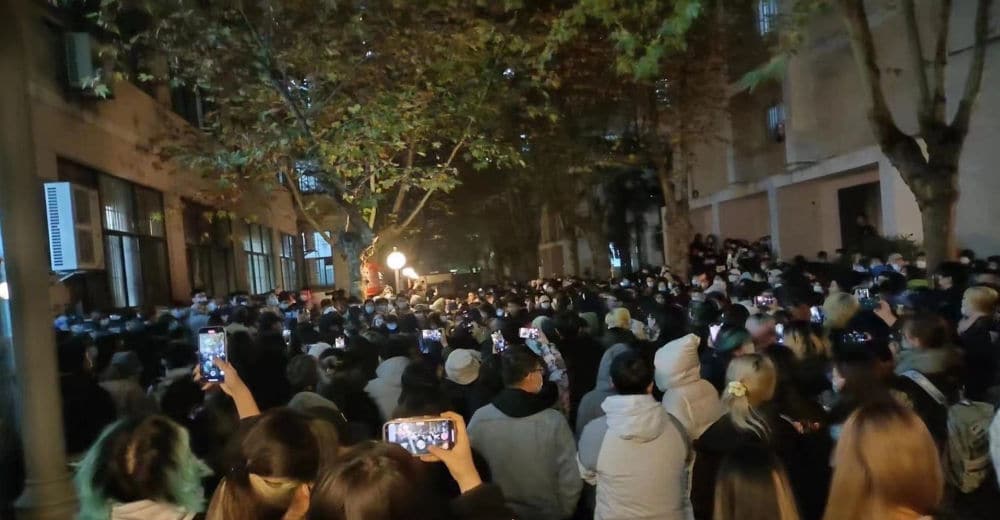 One commenter wrote: “Tonight is the night when students are flooding the internet, their fire [torch] will burn forever, what a magnificent night!”

“The students are very brave, they are the first to stand up. I hope the workers will stand up, and finally, all people will stand up.” 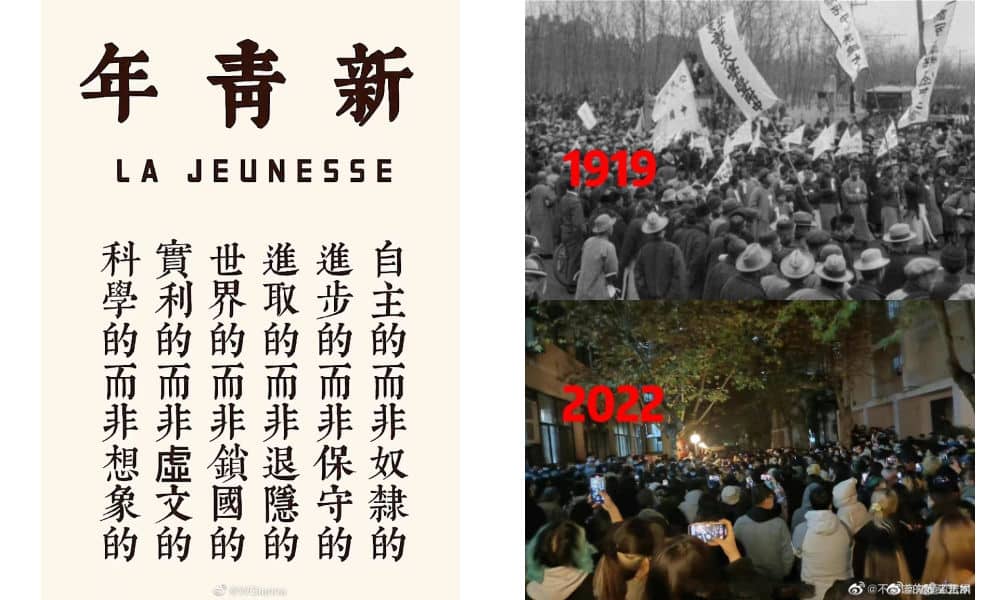 Many people on Chinese social media posted references to La Jeunesse (New Youth), a Chinese literary magazine that was founded in 1915 by Chen Duxiu and also influenced China’s May Fourth Movement (sometimes referred to as the Chinese Enlightenment), which was all about the Chinese youth being the catalyst for transformation.

“You are the heroes of the awakening,’ others wrote.

For more articles on the Covid situation in China, check here. If you appreciate what we do, please support us by subscribing for just a small annual fee. 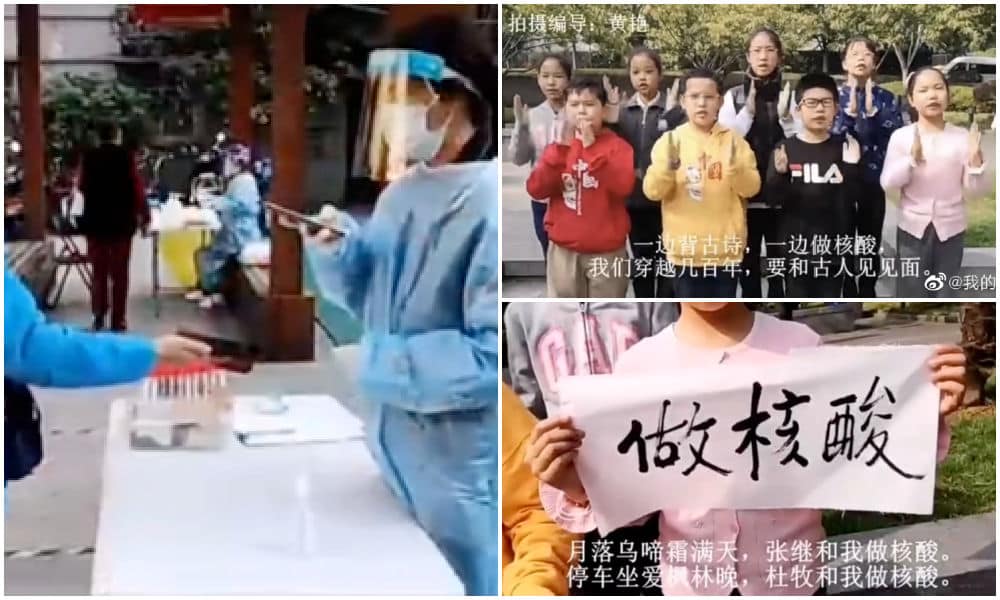 A new Chinese children’s song, produced by local officials in Jiangsu, recites classical poems and invites China’s great poets to do nucleic acid tests together. As the video is going viral, it is getting ridiculed online for being excessive and ‘over the top.’

A a Chinese children’s song titled “Doing Nucleic Acid Tests While Reciting Ancient Poems” (背古诗做核酸) is making its rounds on Chinese social media on Wednesday due to its unusual lyrics and video clip.

The children then continue to sing phrases from famous Chinese classical poetry, after every phrase emphasizing that they are doing nucleic acid tests together with great Chinese poets such as Li Bai, Lu You, Luo Yin, Du Mu, or Wang Anshi.

“‘From a distance the waterfall looks like a hanging stream’ [遥看瀑布挂前川], Li Bai is doing nucleic acid tests with me;
‘When will the bright moon shine on the way back’ [明月何时照我还], Wang Anshi is also doing tests.”

Meanwhile, the video shows a Covid19 testing booth where anti-epidemic workers are taking samples and people are standing in line to do a nucleic acid test. Some children are holding calligraphy rolls in their hands with the characters “doing nucleic acid tests” on it. 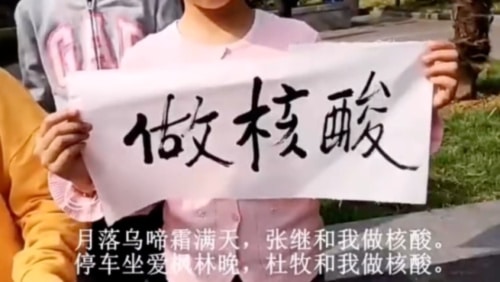 The song, written by Xu Zhong (徐众), is said to be a joint initiative by a Jiangsu province local branch of the China Democratic League (one of the legally recognized minor political parties in the People’s Republic of China), together with a local community Communist Party committee. It was allegedly produced to “enrich the cultural life within the community” and bring some “positive energy” to China’s ongoing fight against Covid19. 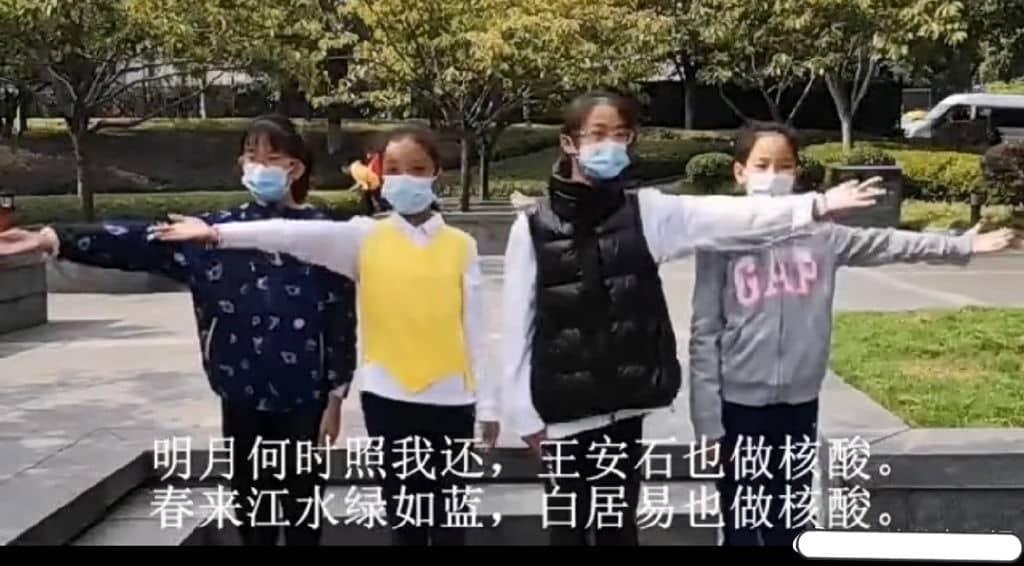 The video quickly went viral in various WeChat groups, after which it was also shared on other platforms including Weibo under the title “Let’s Do Nucleic Acid Tests Together” (“我们一起做核酸”).

"Let's do nucleic acid tests together 🎶" A new Chinese children's song that was released by a local Jiangsu community is being shared a lot on WeChat today, the video shows kids reciting ancient poems while doing Covid19 tests. "We've entered another level of madness," some say. pic.twitter.com/4PIFGfofID

“It’s just so over the top,” some commenters said, “It’s like the nucleic acid test has become China’s Fifth great invention.” “I’m shitting myself laughing,” others write.

There were also those who used the song to criticize China’s Zero Covid policy for being “excessive”, writing: “How about we also dig up the bones of our forefathers and do a nucleic acid test?”

Under Xi Jinping, the idea of combining Chinese tradition with modernity and promoting ancient culture in China’s ‘New Era’ is part of the journey of the ‘great rejuvenation’ of the Chinese nation. Perhaps the producers of the video thought it would be a fruitful idea to mix Chinese poetry with the country’s strict Covid19 testing campaigns.

One Weibo blogger commented that the local Chinese officials who made the song must be suffering from an epidemic-related ‘Stockholm Syndrome’ in order to create such a “phenomenal work” where kids are reciting ancient poems while doing Covid-19 tests.

As the video was on its way to go viral, it was quickly taken down after receiving criticism and ridicule.

“I’m glad we’ve still got the screen recordings,” some said. “I’m still trying to find a link of the video that wasn’t taken down yet,” another person wrote: “I could use a good laugh today.”

Out of the Closet: After Protests in China, “Political Coming Out” Trend Spreads Across Social Media

Why Russia Is Nicknamed the “Weak Goose” on Chinese Social Media