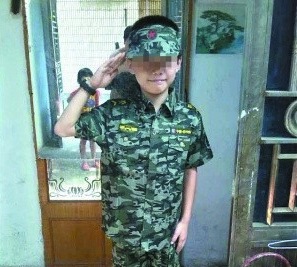 Trending on Sina Weibo today is the tragic of a ten year old boy who committed suicide by hanging (#10岁男童上吊自杀#).

According to Sina, on the night of November 17th, a child in Guangzhou committed suicide by hanging himself in his home. Prior to the boy taking his own life, his grandmother discovered that the child had only scored 39 points on his mid-term English exam. She told him not to play outside but practice his texts instead. In his diary, the boy wrote: “I regret that I only scored a 3.9, I wish I had listened to my grandmother the day before the test.”

Netizens have responded in various ways- most are shocked that a boy as young as ten years old knows how to hang himself. Others blame the existing pressure in China for children to get high scores at school.

Although China has recently seen a drop in suicide numbers, suicide amongst young people is still a problem. A comparable suicide case to the Guangzhou one occurred in China last year, when a 10-year-old boy jumped from a building after being scolded by a teacher. Suicide is the top cause of death among Chinese youth; school stress is often a major factor. The Annual Report on China’s Education has stated that there were 79 suicides by elementary and high school students last year that were directly related to extreme pressure to study (Caskie, 2013; Roberts 2014).

[box] This is Weiblog: the What’s on Weibo short-blog section. Brief daily updates on our blog and what is currently trending on China’s biggest social medium, Sina Weibo.[/box]