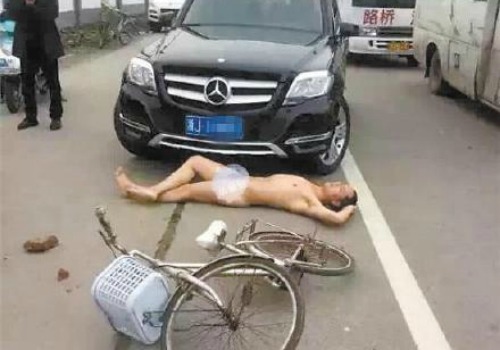 One Weibo netizen posted a picture of a naked man lying in front of a Mercedes in Zhejiang. According to Chinese news site The Paper, the man is known to be a ‘pengci’ fraud – deliberately getting hit by cars and then demanding compensation – who was just released from prison.

On April 10, a man was spotted lying in front of a Mercedez Benz in Wenling County in Zhejiang Province after getting off his bike and taking off his clothes. The Weibo user who initially placed the picture online, Wang Laowu (“王老五回家”), was driving nearby the peculiar situation when he got out of his car to see what was going on.

According to bystanders, the man on the ground was not mentally ill, but a sane man who was looking to earn money through ‘pengci’ (碰瓷), a common type of fraud in China where people deliberatly get involved in accidents, or make it appear as if they were hit by a car, to get financial compensation.

Reporters later understood from the local police station that the man is a 31-year-old from Henan, who was just released from prison a week earlier for ‘pengci’, pretending to be run over by a Toyota. The man was in prison for seven days for his crime.

The female driver of the Mercedes reportedly was shocked by the incident and called the police. It is unclear if the man is currently yet again incarcerated. The reason why the man decided to undress also remains unclear. 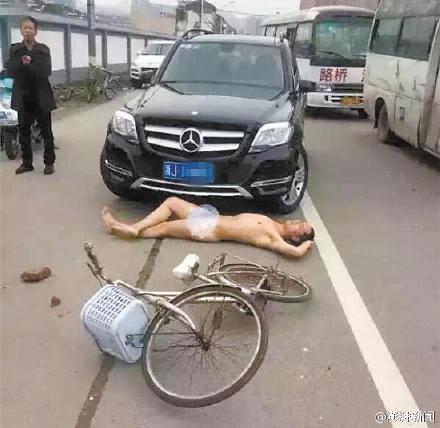 “Seven days was clearly not enough,” one netizen says about the man’s prison sentence. “Please take note that this is someone from Henan,” one Weibo user comments.

Henan province, in central China, does not always have a good reputation, with many having a regional bias against Henan and consider people from the province to be dishonest and deceptive.

Another netizen feels that people from Henan are often negatively portrayed in (social) media: “When a person from Henan does something good, you never remember,” he says: “but when they do something bad, you say that it’s Henan people at it again. The trashy behaviour of one person is not representative for the entire region.”