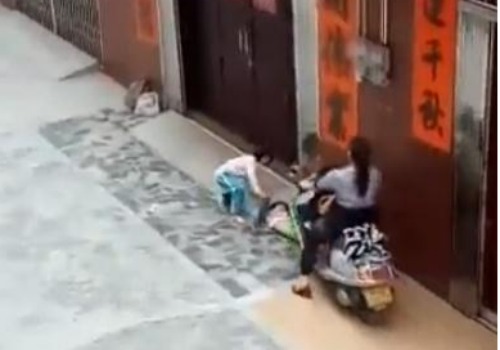 What on earth moved a Guangdong woman to deliberately drive over the legs of a 5-year-old child? It is the question on the minds of many netizens after footage of the shocking scene leaked on Chinese social media.

A shocking video that was recently exposed on Chinese social media shows how a woman on a motorcycle drives over the legs of a 5-year-old child. The incident captured on camera in an alley reportedly occurred in the city of Yangjiang in Guangdong.

The beginning of the 40-second Miaopai video shows how a young girl drags away another child that is lying on the ground dressed in green pants. 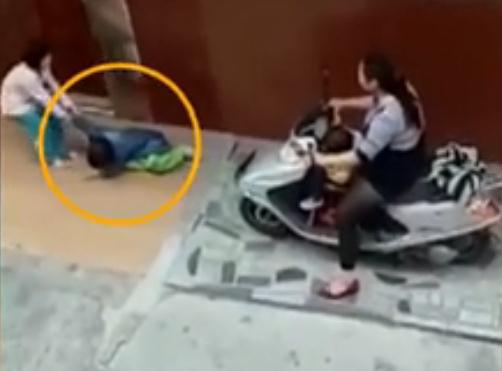 From a short distance, a woman yells at them and then starts her motorcycle and drives over the legs of the crying child. The woman also holds another small child on her motorcycle. It is yet unknown what relation the woman has to the children.

The incident was reported by different Chinese news outlets on January 3 and soon became a trending topic on Weibo. Chinese web users collectively expressed deep indignation and repulsion regarding the video.

According to different sources, it has not been confirmed how the child is currently doing and to what extent the legs are injured. Many media reports write that the young victim is a girl, according to others it concerns a 5-year-old boy.

The woman has now been tracked down by police and has been taken into custody for further investigation.

On Sina Weibo, netizens are outraged. “This is just inhumane”, many netizens say: “This woman deserves to be beaten to death.”

“Calling the police doesn’t help, all they’ll do is give some talk,” another person writes: “I feel so sorry for this suffering child.”

Many people direct their anger at the police, expressing their concerns that police does not do not act out enough against child abuse.

It is not the first time Chinese netizens voice their concern over the protection of minors. Cases of domestic violence are commonplace, as parents often do not regard beating their own child as a violation of law.

In November 2014, the Chinese government issued the draft of the first anti-domestic violence law, which was passed a little over a year ago.