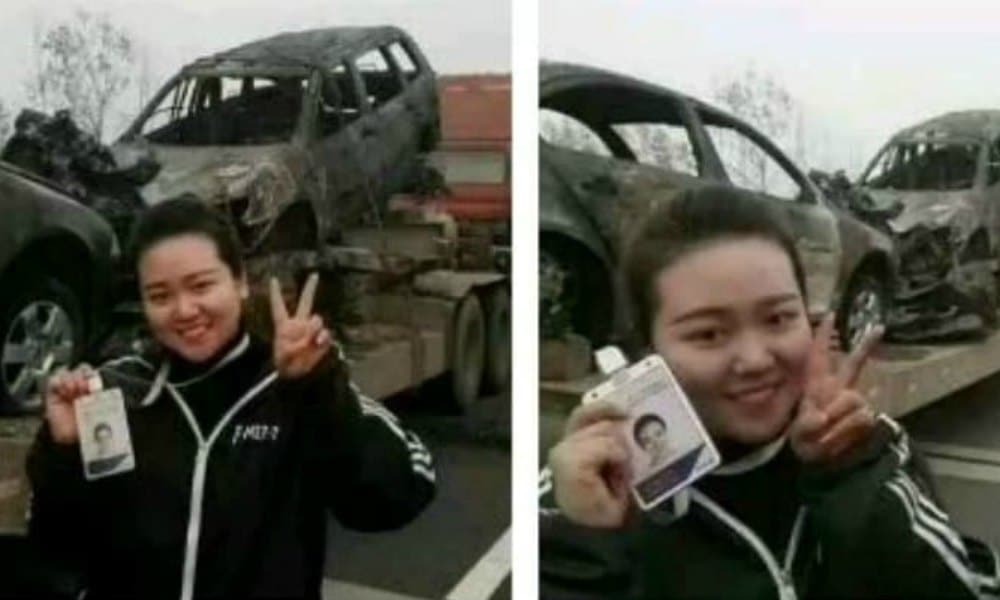 A young woman smiling at the scene of a horrible accident in Anhui Province have left thousands of netizens angry.

Local media reports in China blame a “sudden fog” for a horrifying accident at an Anhui expressway that killed at least 18 people and injured 21 others on Wednesday morning. The multiple collision caused over 30 vehicles to pile up, NDTV reports. 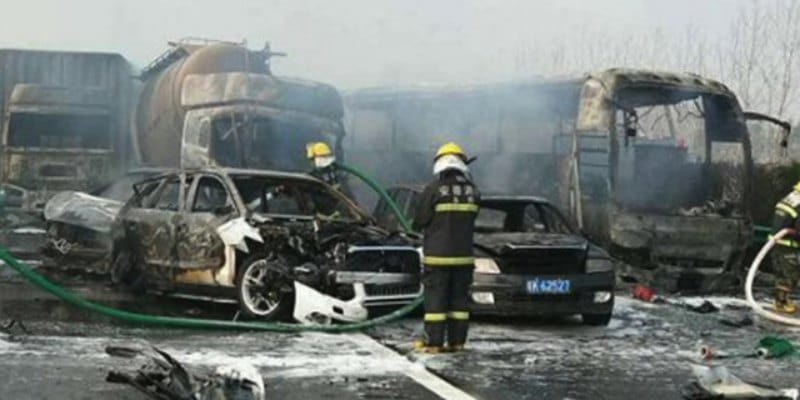 Dramatic footage (CCTV video, Youtube) taken at the scene, near Fuyang city, shows that multiple trucks and cars caught fire after the collision and how rescue workers are at work to verify casualties. 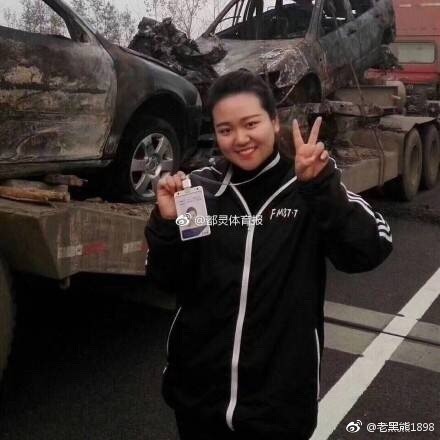 A presenter poses at the scene of the accident with a big smile.

The gravity of the accident did not stop a local Fuyang reporter, however, from taking smiling selfies at the scene. The woman, a presenter at Fuyang’s Yingxiang Traffic Radio (@颍上交通音乐广播), makes a peace sign and holds her badge as she happily poses in front of burnt out cars. A man in uniform is standing next to her in one of the photos. 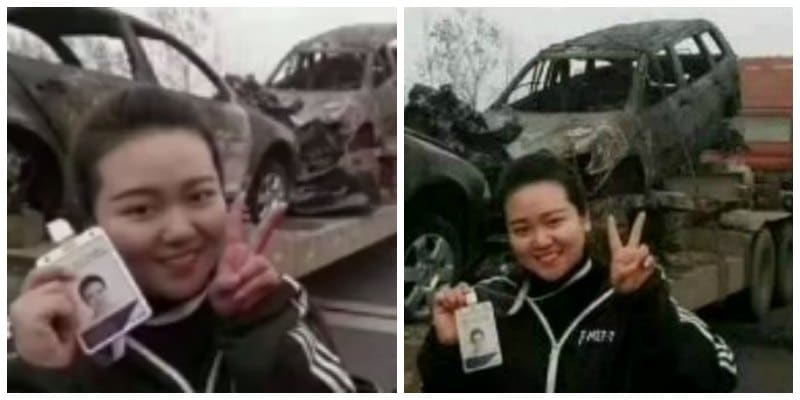 The photos were posted on Weibo by multiple accounts, one belonging to a female netizen who is a local resident from Fuyang, Anhui. She writes:

“At 7.45 in the morning of the 15th, 30 vehicles collided, leaving 18 people dead and 21 wounded. Yet this Fuyang Radio presenter poses at the scene of the crash with a man in uniform grinning from ear to ear. Don’t you have a conscience? Don’t you have any personal integrity in your work?” 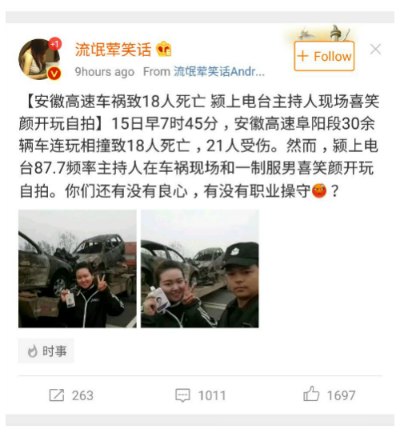 One of the first people to share the photos on Weibo is a local Fuyang resident.

The pictures triggered thousands of angry reactions on Weibo. A typical comment by an anonymous netizen said:

“She has no humanity at all. So many people have died, and she is still playing around with selfies, is that human? Just seeing this scene, my heart feels so upset. I hope the relevant authorities in Anhui will teach her a lesson.”

Many of the people commenting to the issue said they were also from Fuyang and grieved by the accident and the woman’s behaviour at the scene. Fuyang is a prefecture-level city in Anhui with more than 7,5 million inhabitants. 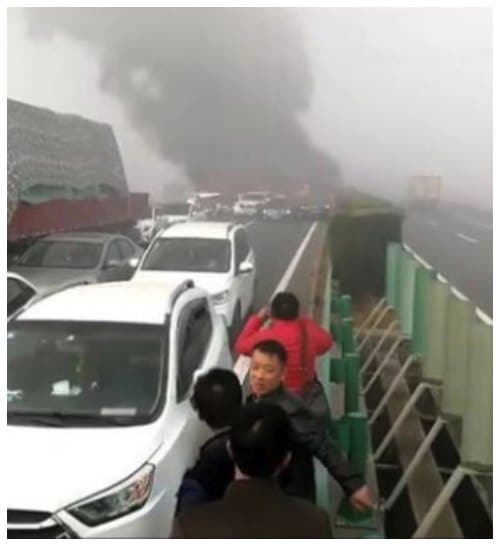 Scene of the crash, photos from Weibo.

On Wednesday evening, the presenter in question uploaded a video in which she apologizes for her actions. “Hello everybody I am Ling, and I want to sincerely apologize for what has happened today,” she says: “I’m sorry. I was wrong.” 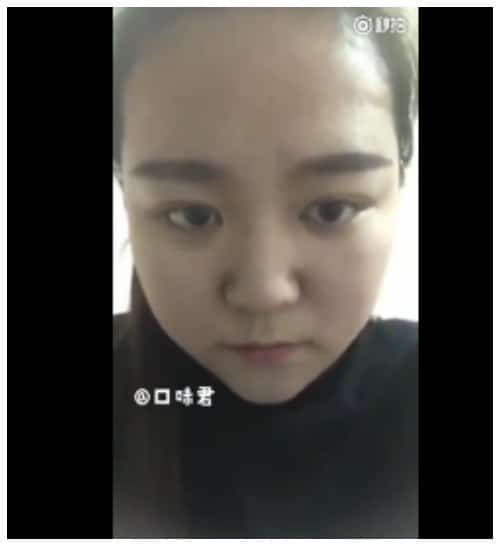 The woman named ‘Ling’ apologized in an online video on Wednesday night.

In the morning of November 16, the Fuyang Traffic Radio station posted an announcement on social media denouncing their colleagues’ behavior, stating that her employment at the station has since been terminated.

The Fuyang radio station announced on Weibo that the woman is no longer working for them.

This is not the first time a smiling photo at the scene of a serious accident goes viral on Weibo. In 2012, a local Shaanxi official made headlines when he was photographed laughing at the scene of a traffic collision that left 36 people dead.

The photo of the “smiling official” instigated a ‘human flesh search’ with people on Weibo researching his identity and background. His expensive watches drew the attention of netizens, who eventually exposed him as a corrupt official. 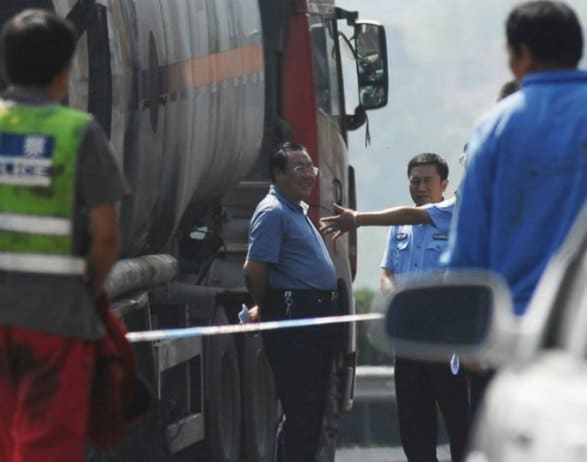 The ‘smiling official’ at the scene of an accident that left 36 people dead. (Image via Chinasmack)

On Weibo, many people do not understand how someone can be smiling under grave circumstances: “Is she braindead? How could you ever laugh when 18 people just died?”

There are also a few people, however, who feel the presenter is criticized too harshly by the online community. One person writes: “Give the girl a chance. People make mistakes.”

Others remind the people discussing this issue to focus on the victims of the accident instead: “We hope they can rest in peace.”