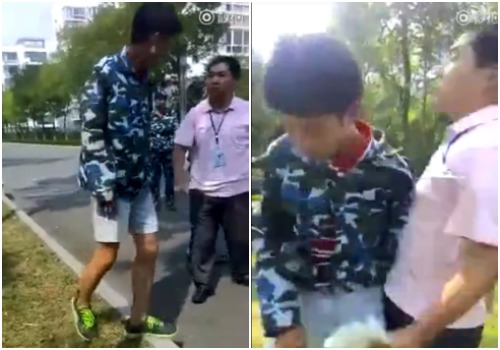 Chinese netizens have exposed how a teacher beats and kicks his students during a military training at a Shandong school. Weibo users respond to the video with anger: “This teacher should be beaten himself.”

Chinese netizens recently exposed how one teacher at the Rizhao Maritime Technical School (日照航海技术学校) in Shandong beats and humiliates students during a daytime military training.

In the footage of the incident, the teacher can be seen pushing and kicking one of the students and beating him in the face while scolding him. Other students stand by and watch, but later they are also slapped in their face.

The boys were punished for coming late to military practice. The teacher can be heard saying things like: “If you don’t respect discipline, then you better go home.”

The video was initially shared on an online forum of the Shandong school, and later became a hot item on WeChat and Weibo, where the footage was shared thousands of time. Some netizens also came forward with the teacher’s name.

Since the incident was exposed, the Rizhao Maritime Technical School has come forward with a statement on September 4th, saying that the teacher involved is currently suspended and will be fired.

On Weibo, many netizens think that the teacher should be punished more than only losing his job: “After he is expelled, this teacher should also be beat up,” one netizen says.

But there are also Weibo users who suggest the teacher should not get all the blame: “You say the teacher is cruel, and that’s not right. But what about the students coming late?” Others also emphasize that present-day students lack discipline, and that it is important for teachers to let them know the importance of abiding by the rules.

“I am really afraid to go to military practice now,” one netizen says.

The majority of Chinese universities organize compulsory military education for their new or first-year students.

There are also netizens who thank the person who filmed this incident for doing so and putting the footage online: “Thank you, smartphone filmer. Thanks to you this madman now has to pay the price for his actions.”

Related Topics:china education
Up Next

The “Tents of Love” Phenomenon: Chinese Parents Sleep in Tents At Their Kids’ New University