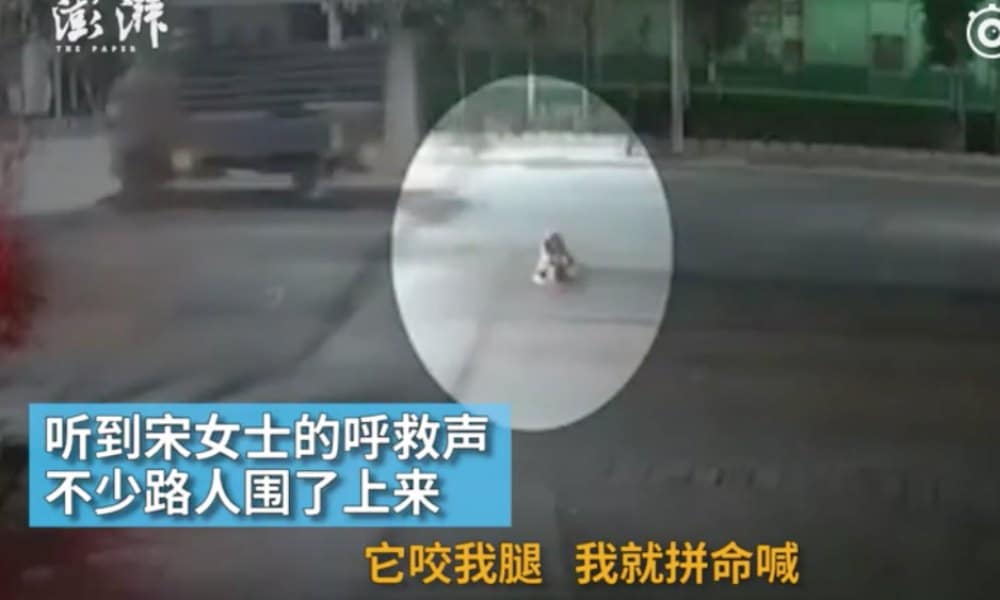 Out of nowhere, a female pedestrian was attacked by an aggressive Tibetan Mastiff dog in the city of Zibo this week. A courageous bus driver came to her rescue.

A female pedestrian in Zibo, Shandong, was attacked by a Tibetan Mastiff in the middle of a busy intersection this week. Chinese news outlet The Paper reports that the woman was on her way home when the dog suddenly attacked her.

While the woman is lying on the road, struggling to get away from the aggressive dog, multiple cars pass by without stopping. Within a minute, however, both a taxi and public transport bus stop. Only the bus driver gets out to offer help.

Watch footage of the incident here:

Security footage shows how the bus driver runs towards the woman from the other side of the road and starts hitting the dog with a fire extinguisher. The woman gets away, but then the dog turns against the bus driver and starts attacking him before some bystanders then succeed in chasing the dog away.

The woman and the bus driver were both taken to the hospital for their injuries.

Local police are currently investigating the case, but the dog is still on the loose and nothing is known about its probable owner.

Bystanders who do not intervene while witnessing a dangerous situation often make headlines in China.

The bystander effect is a social psychological matter; the more people that witness a person in peril, the less the chances are that one of them intervenes. In other words: one is more likely to help out in an emergency situation when one is alone, than when there are ten people standing by. When the first person does help out, it is far more likely that others will follow.

In China, the ‘bystander effect’ has received ample media attention over the past five years, with one of the high-profile cases being the 2011 Foshan incident, when security cameras recorded how a two-year-old girl was struck by a van. As she lay in the road, 18 people passed by without helping. The girl was killed when a second car hit her and the story became international news.

“I hope the bus driver gets a prize for his courage. So many cars pass by and the only one really helping is him,” multiple commenters on Weibo say.

“The man should be awarded for his good deed,” many say.