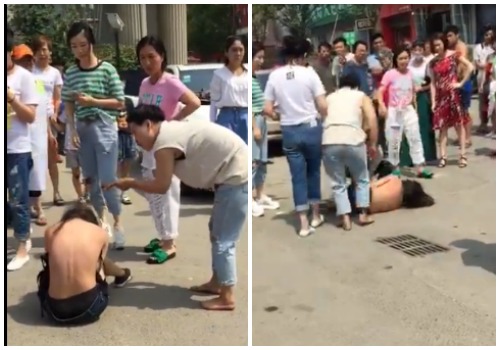 A shocking video showing multiple women hitting and kicking an alleged ‘mistress’ in broad daylight has become a topic of much discussion on Sina Weibo, where the many different reactions show ambivalent attitudes on China’s mistress culture.

Another video showing a violent public scene is making its rounds on Sina Weibo. According to various Weibo netizens, the scene was filmed by eyewitnesses in Bozhou, Anhui province – it allegedly involves a married woman beating up her husband’s mistress (xiaosan 小三).

The explicit video shows one woman hitting and kicking a half-naked woman who is laying on the street with torn clothes. Three other women also participate in beating up and humiliating the woman, while about twenty bystanders stand around in a circle watching the scene unfold, including some children.[June 30: unfortunately the video has been removed by YouTube for containing graphic violence, even though published in news context. Please watch video through this link.]


The video that is making its rounds on Sina Weibo, containing graphic violence.

As confirmed by What’s on Weibo, the scene indeed took place in the city of Bozhou, at the intersection of Guangming West Street (光明西路) and Tang Wang Main Street (汤王大道), near the entrance of a big apartment compound (帝景花园) as pictured in the Baidu maps image below.

Online reactions to the video are manifold. There are many netizens speaking out against the violent women: “Being a mistress is a moral problem, but hitting a somebody and tearing off their clothes is breaking the law,” one netizen says. Another person comments: “What a bitch! No wonder her husband has another woman!”

“Mind your own husband and don’t go hitting other people,” one commenter says: “This is an infringement of human rights. If you no longer sleep with your husband he will find a mistress. You should take better care of your husband’s private parts. Your charm is gone.”

“Beating your husband’s mistress like this is just too much,” one person writes: “This isn’t all her fault. In the end, this involves three people.”

But there are also those who think the beaten woman on the street got what she deserved: “This serves her right! Regardless of the law, this woman deserves to lose face.”

The practice of having a mistress or a ‘second wife’ has become ubiquitous in China since the market-reform era. For some, becoming a mistress has even become a career choice.

According to Jemimah Steinfeld, author of Little Emperors and Material Girls: Youth and Sex in Modern China, there is a subtle difference between being a so-called ‘second wife’ (ernai 二奶) or being a ‘mistress'(xiaosan 小三): “In certain instances ernai graduate into xiaosan – a third party – those who have fallen in love with the man and wish for him to leave his wife” (2015, 91). Different from the ‘second wife’ who merely is an extra woman the man entertains himself with, the xiaosan is a bigger danger to his marriage, because they expect to marry the man they are seeing, Steinfeld writes.

The ‘xiaosan‘ phenomenon is commonplace, and can evoke strong reactions. As one female Weibo user says: “Those who sympathize with this xiaosan obviously never had a husband who had one before, otherwise you would not be so calm about it and you wouldn’t say that beating her is wrong.” 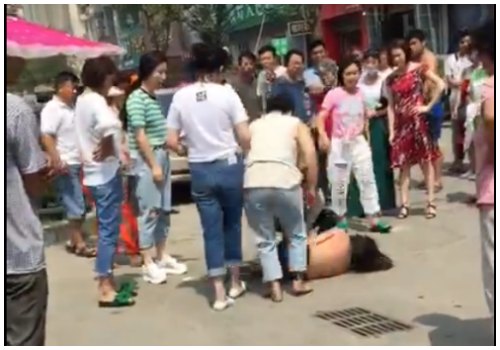 The overall anger against ‘xiaosan’ is also visible in the video, where many women stand by the woman who initally beats the woman, as they join in and vent their anger on her.

Last year, these types of videos showing furious women beating up their husband’s alleged mistress even became some sort of trend, with a chain of videos popping up on the internet showing comparable scenes. The trend seems to continue. Just a few days ago, the Shanghaiist reported how another suspected mistress was also beaten in broad daylight by the husband’s wife and her mother.

The many discussions on Weibo show that the topic of China’s mistress culture is very much alive.

There are also commenters that do not say anything about the mistress-issue, but are angered that so many people stand by without doing anything. “The bystanders are just enjoying the scene!” one netizen says, posting an angry emoticon. “Where is the police in this matter?” another person wonders.

Although this topic became trending on Weibo on June 26, it is yet unknown who the women in the video are. This story will be updated if any more information about the incident is released.