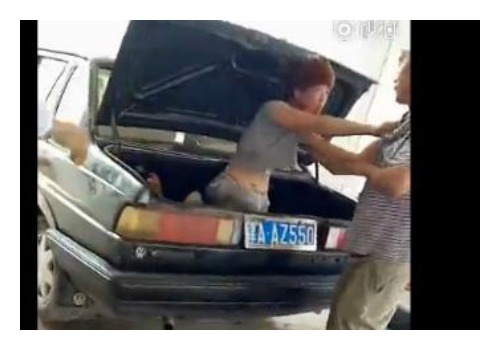 One day after a shocking video of a woman being slapped and forced into the trunk of a car became trending on Chinese social media, more details on the violent incident have come out. The woman says she won’t press charges against the aggressor, who is her husband.

On June 10, one day after the video of a woman being slapped and forced into the trunk of a car went viral on China’s social media, there is an update to the story. The incident, that took place in Cangzhou, Hebei province, was first shrouded in mystery – the video showed the man violently beating the woman and pushing her inside the trunk while bystanders did little to prevent him, after which he drove off.

Now, under the hashtag of “The Woman in the Trunk” (#后备箱里的女人#), more details have come to light.

News reports state that the police has investigated the case, and they confirm that the man and woman in the video are a husband and wife from Cangzhou, who were caught up in an angry argument at the time of the video.

According to the Weibo account of the local police, the woman is not injured and refuses to press charges against her husband – instead, the couple just wants to “live their life in peace together”.

According to the Weibo account of blogger Hu’erdao, the woman and her husband said their lives have been greatly affected by the video. Hu’erdao writes: “You thought this was still something between you? This has now become a public matter. Many people thought this was a kidnapping case. Did you think you could just leave it at this? You think it is normal to put someone in the car trunk?” 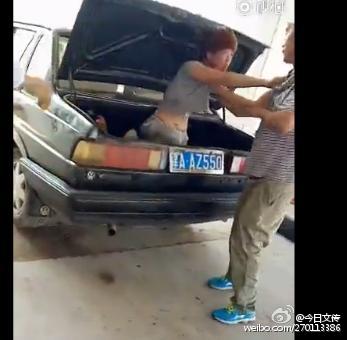 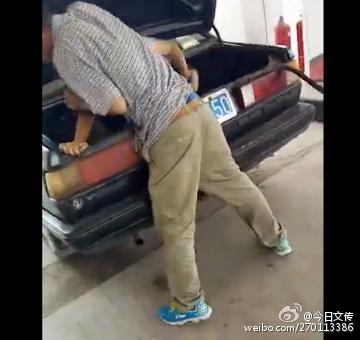 Other netizens agree with the blogger, saying: “If this was America, he would be arrested no matter if she pressed charges or not.” Weibo user She Huimin (@佘惠敏) also argues that the violent man should be arrested, no matter if the woman reported him to authorities or not: “They could suspend his driver’s license and take him into custody for ten days (..) Didn’t he break the law by putting someone in the trunk of his car?”

Another Weibo netizen writes: “My friends live in the same village as this couple. Everybody there knows she’s too afraid to get a divorce, as she fears he might do something to her family.” She also writes that the man is known to be violent and a heavy drinker: “It is possible for him not to eat, but it’s not possible for him not to drink.” In another post she says: “She is too afraid to press charges, and too afraid to get a divorce, out of fear for his revenge. After all, this man is capable of anything – he wasn’t afraid that he might’ve killed her by putting her in that trunk.”

Although there are many netizens who are angry that the case is left at this, there are also those who argue that the woman might not want to press charges out of fear, but that the man should be convicted no matter what – after all, “isn’t domestic violence a crime?”

China’s first law against domestic violence came into effect on March 1st of this year. According to estimations, one-in-four Chinese women have suffered violence in their marriage. But as what happens within the family home is traditionally considered a private matter, many women are afraid to talk about domestic abuse – which is still considered taboo.

But social media plays an important role in creating more awareness about domestic violence and the reaction of bystanders. Earlier this year, a video of a woman being nearly abducted in a Beijing hotel made headlines all over China. It showed a man violently dragging a woman through the hallway, while multiple people passed by without intervening. Some explained their passive response by saying they might have thought the man and woman were husband and wife – but many netizens pointed out that it should not make a difference if they were.

For now, it seems that the case of the woman in the trunk has reached a dead end. As the woman refuses to press charges, expressing they just want to “live their lives together in peace”, it is to be hoped that it will actually come to this.