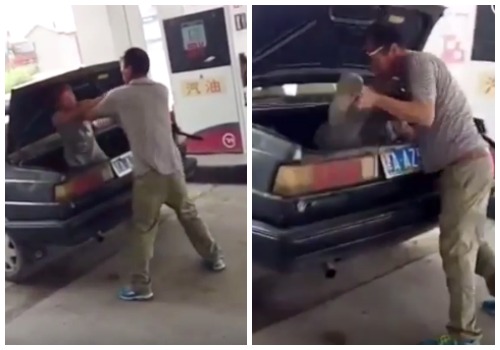 Shocking footage that is making its rounds on China’s social media shows how a woman is beaten and forced into a car trunk at a gas station in Hebei. Weibo netizens are appalled with the incident and how it was dealt with – blaming existing traditional ideas on domestic violence being a ‘private matter’.

A Cangzhou regional Weibo media page (@沧州这点事儿) released a short video on June 9 on its social media channel that shows how a woman is forced into a car trunk by a man while bystanders are watching and filming the incident. The violent episode allegedly took place in China’s Cangzhou city (沧州) in Hebei province.

Although bystanders yell “don’t hit her”, the man continues to slap the woman and to force her into the trunk. He then shuts the trunk with force, while her hand is caught in between. The man then stands around for a bit before he returns to the driver’s seat. According to Cangzhou’s regional Weibo channel, the man then drove off.

The video has been shared hundreds of times on Chinese social media, with many netizens responding with shock and anger. “What is a woman’s worth? She is treated like a commodity”, one netizen says. “The man on the side does not prevent this from happening!” another Weibo user comments.

“AZ550 is his number plate,” one netizen responds: “Oh, China’s traditional concepts! Well, now the law has decided that violence between a husband and wife is illegal. And everyone should know this. However, under these circumstances, the woman should’ve called for help and should’ve pointed out a specific person to call the police. Just resisting without saying a single word is not helpful.”

“My heart feels heavy,” another person responds: “It seems like all people can do when faced with these sort of incidents is just to film it.”

“No matter if these people are husband and wife, under such circumstances, people should call the police no matter what, and definitely don’t let the car drive off. It is up to the police to find out the truth behind this matter,” one netizen writes.

Amongst the many things that netizens are questioning about this incident are (1) why the woman did not cry for help, (2) why the bystanders did not take more action, and (3) where the police were in this matter.

Traditional ideas about domestic violence being a “private matter” are also mentioned in this matter. Earlier this year, China launched its first law against domestic violence. As Li Mingshun, Party secretary and deputy president of China Women’s University, was quoted by China.org: “The ancient social orders that took family as a haven excluded from legal penalties no longer apply to a society which is governed by law and seeks to ensure equality and democracy to all of its citizens.”

But although domestic abuse has now become illegal by law, many say the punishment of those who break the law is still too light, which still makes domestic violence a big problem in China.

According to state media estimation, one in four married women in China have experienced some form of domestic violence, although the real figure may be much higher, since many women do not report cases of abuse. Due to the new law, victims of domestic abuse can go to court to seek a restraining order, which could potentially force the abuser out of the home. But critics say the legislation still doesn’t go far enough. “Getting a marriage certificate is like a no-guilty-medal, it lets you get away with anything,” one netizen remarks.

For now, China’s official media report that any further details of this story are yet “unknown”.

Woman Forced into Trunk of Car: “I Won’t Press Charges”