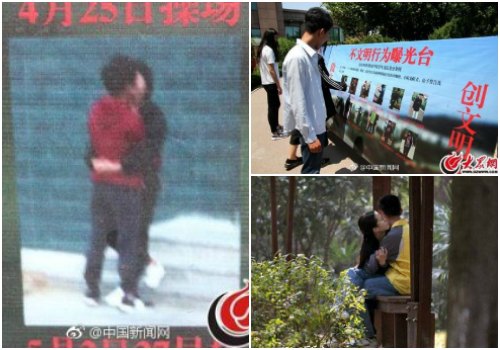 A Shandong college has become a topic of discussion on Chinese social media for running an on-campus campaign against hand-holding, hugging and kissing between students. The school has put intimate photos of its students on public display as a warning to others.

The Shandong Foreign Languages Vocational College in Rizhao has sparked controversy on Chinese social media for running a peculiar campaign against public displays of affection and other “uncivilized behavior” on campus.

The controversy started when the school set up an on-campus booth for “exposing uncivilized behavior” (不文明行为曝光台), where they publicly displayed photos of students. The photos included those of student couples holding hands, kissing, or cuddling. It also showed pictures of students smoking, drinking, or keeping on-campus pets.

Photos of the campaign were posted online by a local Rizhao Weibo account on May 16. 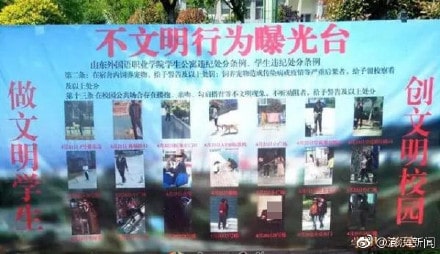 The campaign has drawn criticism from Chinese netizens; many wonder what is “uncivilized” about students being in a relationship and showing some affection. People also address the fact that the school published these photos without permission from the students. “Isn’t it ‘uncivilized’ to publish people’s photos without their permission?”, many say. 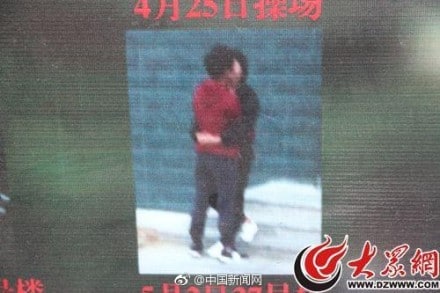 “It is normal behavior for couples to hug and kiss, as long as they do not disturb other people. Even if it is in a public area, it should not be labeled as being ‘uncivilized’,” one WeChat blogger wrote. 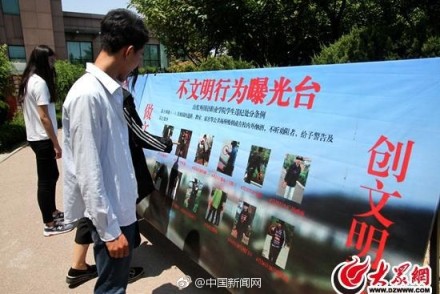 Since the incident caught the attention of Chinese media, the college responded to journalists that their campaign was approved by the department of education and that they plan to continue exposing student’s pictures on campus.

On Weibo, there are also some people agreeing with the college campaign: “There’s nothing wrong with students being in a relationship, but they do not need to show it in public,” some write.

Jiujiang University Lecture: “Being a Virgin Is the Best Gift for a Husband”

Rock Hotpot: Why Chinese Celebrities are Opening up Their Own Hot Pot Restaurants