This weekend, footage of a pregnant woman intentionally letting a little boy trip in a restaurant in the city of Baoji, Shaanxi province, has stirred controversy on Chinese social media.

The incident occurred on April 19. A surveillance camera in a local malatang (spicy hot pot) restaurant captured how a young boy runs into the establishment, carelessly pushing aside the transparent wind blockers in the door. They hit the face of the pregnant woman sitting by the door, who then spills some food on herself.

The woman, clearly agitated, waits for the boy to run out of the restaurant again. She then deliberately holds out her foot and makes the boy trip and fall.

According to various Chinese news sources, the boy is the 4-year-old son of local shopkeepers, who ran into the restaurant to grab some chopsticks for his mother. Soon after the fall, his mum rushed into the restaurant, asking the woman for an explanation. The pregnant woman then claimed she had a stomach pain and left with her husband before the police, alerted by the boy’s parents, arrived at the scene.

The boy was briefly taken to the hospital for a check-up after his fall, but suffered no serious injuries, as his mother noted on social media (image below). 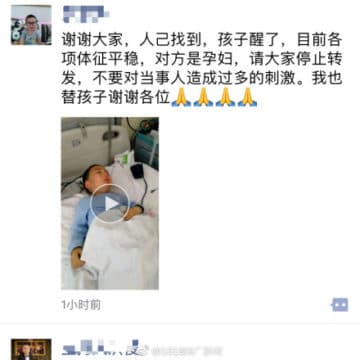 One witness, who was also at the diner when this happened, told China Business News reporters that the boy’s action made the pregnant woman spill her food all over herself. According to this witness, the boy’s parents stood outside and saw what had happened, but did not apologize.

This incident and its footage have gone viral over Chinese internet since Friday, and has been widely covered by Chinese news outlets over the past 48 hours. On Weibo, the hashtag “Pregnant woman stretches foot to tackle child” (#孕妇伸腿绊倒幼童#) was viewed more than 67 million times by Sunday, attracting thousands of comments.

Although some blame the boy’s parents, most netizens agree that the woman’s reaction was completely inappropriate, and some are even worried about the woman becoming a mother herself.

“The young boy rushed inside and hit the pregnant woman with the wind curtain,” one commenter says: “The pregnant woman has the right to be angry for not getting an apology from the boy’s parents. The parents probably did not see their child hit someone, but all the other people did see it happen. (..) However, how the woman reacts is really childish and exaggerated.”

Another top commenter says: “I think this pregnant woman is overreacting. The child is still young and ignorant. You can tell him off, but you can’t tackle him. He is carrying chopsticks in his hand – what if you’d really hurt him? You’ll be a mother soon, aren’t you afraid of your own children being harmed? Your aggression is not good for you baby. You’re an adult – shame on you!”

“I hate little brats such as this one, but you can’t go further than scolding them – this is immoral.”

This case has become such a big topic this weekend because both children and pregnant women are vulnerable social groups, and mothers-to-be are especially expected to be loving and kind to little children – this behaviour is not in line with social expectations. One female Weibo netizen said: “I can understand that pregnant women can sometimes react with an irrational temperament, but this cannot be justified.” Another person wrote: “Being pregnant

Since the case has blown up on Chinese social media, the pregnant woman has become a target of the so-called ‘human flesh search engine’, with people looking to reveal her identity and personal details online. Some even say they hope something will be wrong with her baby.

The woman has since turned herself in at the police station, and has apologized for what she has done. Although the woman was initially punished with a 10-day prison sentence and a 1000 yuan fine (±$158), she was pardoned from going to prison because she is 7 months pregnant.

The 4-year-old boy’s mother has stepped forward and have asked people not to bother the pregnant woman anymore, and to leave her in peace.

“The boy’s parents are really generous,” some respond: “They return good for evil.”

Check out our latest video on this issue here:

By Manya Koetse, with contribution from Miranda Barnes
Follow @whatsonweibo