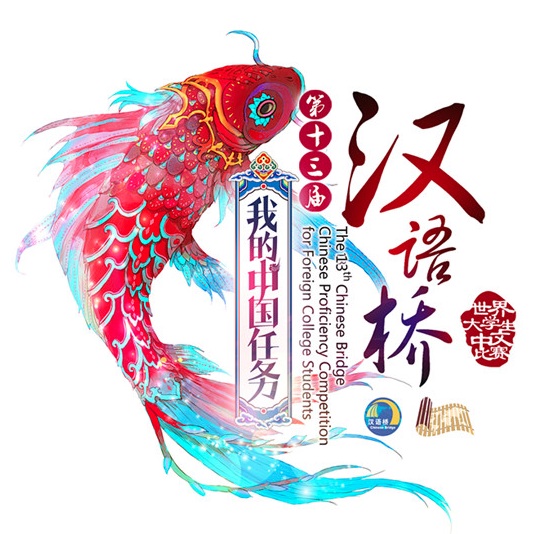 Trending Topic of August 5, 2014: Looking for China’s most beautiful character (#寻找中国最美汉字#). The Confucius Institute Online has launched an online poll where netizens can vote on ‘the most beautiful’ character in the Chinese language, becoming a trending topic on Sina Weibo. The poll was organized concurrently with the finals of the 13th ‘China Bridge’ Competition in Changsha, hosted by Hunan TV on August 3rd.

The ‘China Bridge’ competition is a Chinese proficiency contest for foreign students. The main prize is a Confucius Institute Scholarship and an international round-trip airplane ticket. The Brazilian Shi Moli was the winner of the competition.

The online poll on Sina Weibo has taken the final eight most popular Chinese characters taken from earlier voting. The most popular character is ‘静’ (jìng) – ‘still, calm, quiet’. The character is part of words like ‘精心’ (jìngxīn: ‘peaceful mind’, ‘meditation’) and ‘安静’ (ānjìng: ‘quiet’, ‘peaceful’). Other characters in the top-voted category are ‘忠’ (zhōng)- ‘loyal, honest’, and ‘家’ (jiā) – ‘family, home’. 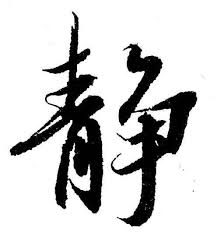 The Confucius Institute is to China what the British Council is to the UK, the Goethe-Institut to Germany and the Alliance Francaise to France. It promotes Chinese language and culture, and is said to be used to increase China’s soft power abroad. It currently has 440 worldwide Confucius institutes and over 646 Confucius classrooms.

For those interested in seeing the Chinese proficiency of one of the 126 international contestants, Hunan TV posted videos of the contest online.

The Adventure of the Funü: China’s ‘Rotten Girls’ and Sherlock Holmes

Li Yifeng is not exactly living up to his role as spokesperson for the Ministry of State Security. 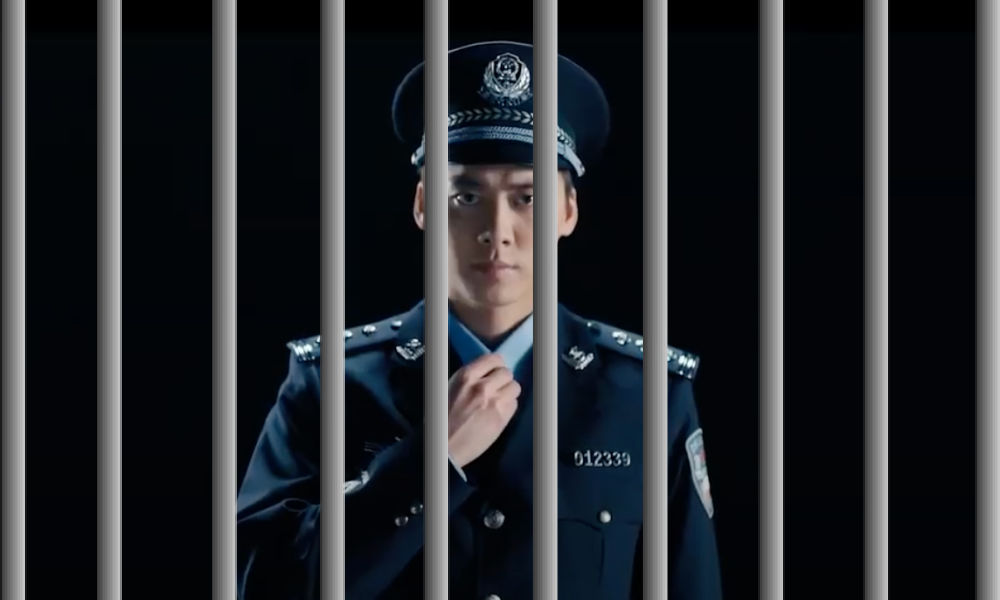 Chinese actor and singer Li Yifeng (李易峰) went top trending on Chinese social media today. The actor, who previously starred as brand ambassador for the Ministry of State Security and played Mao Zedong in The Pioneer, has been detained for visiting prostitutes.

On January 10 of 2021, China celebrated its very first National Police Day to give full recognition to the police and national security staff for their efforts. For this special day, the Ministry of State Security launched a promo video starring Chinese actor Li Yifeng as the National Police Ambassador (#李易峰国安形象传片#). But today, it turned out that Li might not have been the best man for the job. 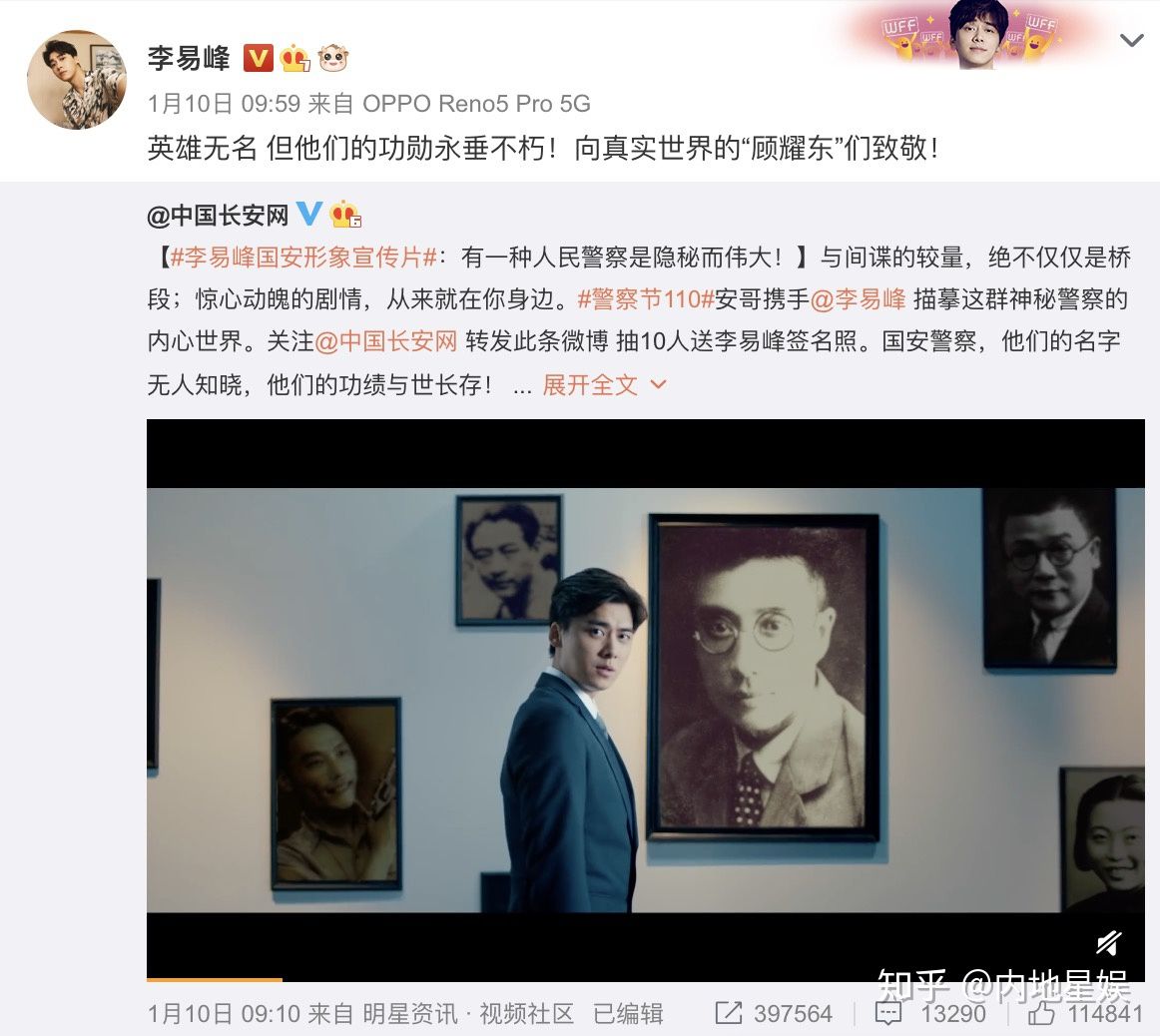 Shortly after the news was announced, various brands for which Li served as a brand ambassador announced that they were no longer working with the actor. Lukfook Jewellery, Mengniu Dairy, Honma Golf, Panerai, Prada, Sensodyne, King To Nin Jiom, and other brands declared that they had terminated their contract with Li (#多个品牌终止与李易峰合作#).

Li rose to fame in 2007 when he participated in the Chinese My Hero talent show. He later debuted as a singer and became a successful actor, starring in various Chinese TV dramas and films. Li became especially popular after starring in Swords of Legends and won an award for his role in the 2015 Chinese crime film Mr. Six (老炮儿). He would go on to win many more awards. One of his biggest roles was starring as Mao Zedong in the 2021 blockbuster The Pioneer (革命者). 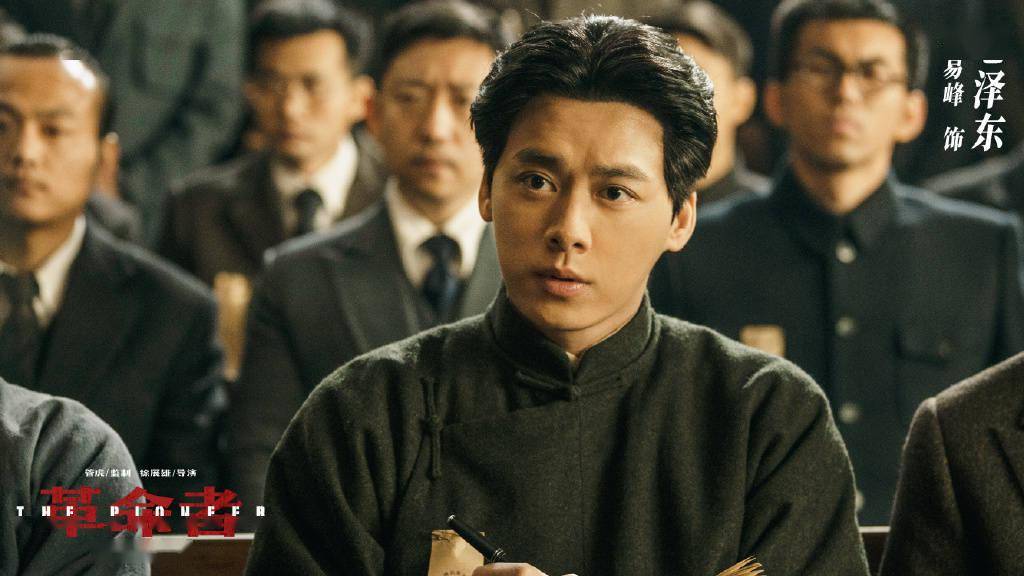 According to Global Times, Li was previously announced as one of the celebrities attending the Mid-Autumn Festival Gala on CCTV on Saturday night, but his name was later deleted from the program.

“I had never expected my idol to collapse like this,” some disappointed fans wrote on Weibo.

In a ‘super topic’ community dedicated to the star, some fans would not give up on their idol yet: “Where is the proof? Besides the Beijing police statement, where is the actual proof?”

On Li Yifeng’s Weibo page, where the actor has over 60 million fans, nothing has been posted since September 5.

The Huading Awards, a famous entertainment award in China, announced that they cancelled Li Yifeng’s title of “Best Actor in China” (#华鼎奖取消李易峰中国最佳男主角等称号#).

“He lost all he had overnight,” some commenters wrote. “Celebrities generally get cancelled for two things: one is evading taxes, the other is sleeping around,” one popular comment said: “So in a nutshell, pay your taxes and don’t sleep around.*”

“Why do you even need to see a prostitute when you’re so good-looking?” others wondered.

One Weibo user (@大漠叔叔) wrote: “Have a good head on your shoulders and just remember one thing. It does not matter how good your reputation is, or how many titles you have, how much the audience loves you, how much the fans embrace you, how many awards you get, it won’t protect you. Stay clear-headed, merit does not outweigh faults! You can’t cross the moral bottomline nor cross the boundaries of the law. You can be canceled just like that.”

* This comment is loosely translated here, but the Chinese is quite funny because the words ‘taxes’ and ‘sleeping’ sound similar. “明星塌房的两个主要原因：一个睡，一个税。 简而言之：该税的税，不该睡的别睡.”

No ugly illustration goes unpunished. Research results are in after the “tragically ugly” schoolbook gate sparked an official investigation. 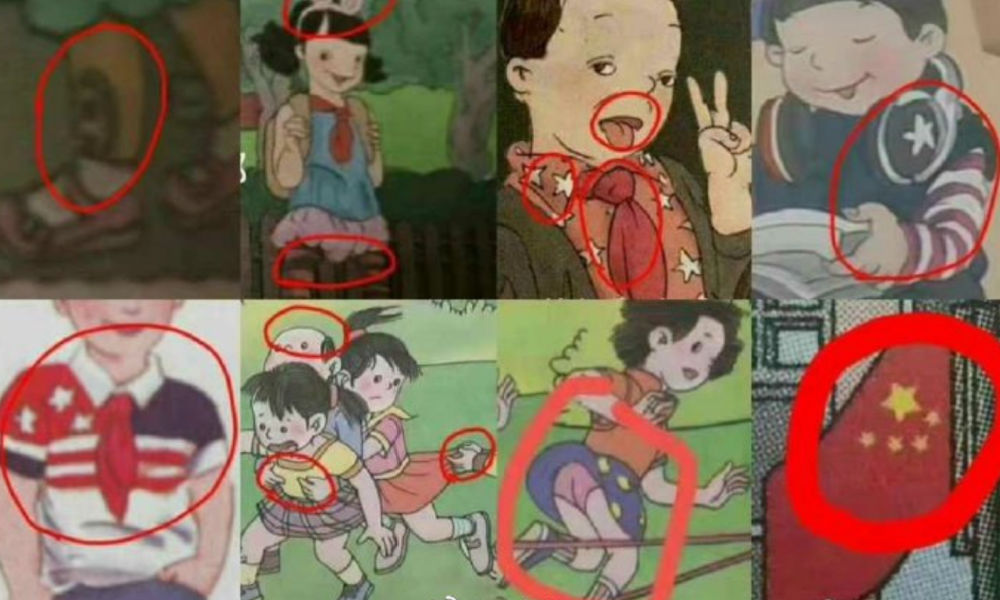 China’s Ministry of Education has wrapped up a 3-month long investigation into the textbook illustration controversy that dominated Chinese social media in May of this year. One of their conclusions? The illustrations are ugly. There are serious consequences for those responsible.

The ugly illustrations in a children’s math textbook were among the biggest topics on Chinese social media earlier this year.

Although the elementary math schoolbooks were published nearly a decade ago, the schoolbook series (covering grade 1-6) went trending after some parents complained about the illustrations on social media. People mainly took issue with the teaching material because they thought the illustrations were ugly, unrefined, and overall weird (read our previous article here). 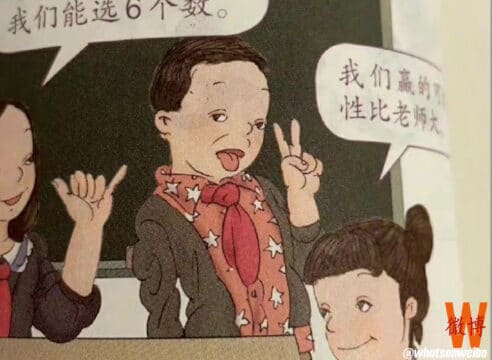 Illustration from the controversial math textbook.

Besides the quality of the design, many people also found that some illustrations were inappropriate. There was a girl sticking out her tongue; recurring depictions of the American flag colors; an incorrect depiction of the Chinese flag; a bulge showing in the pants of the depicted boys; a girl in a bunny outfit, a child with something that appeared to be a tattoo, and more. 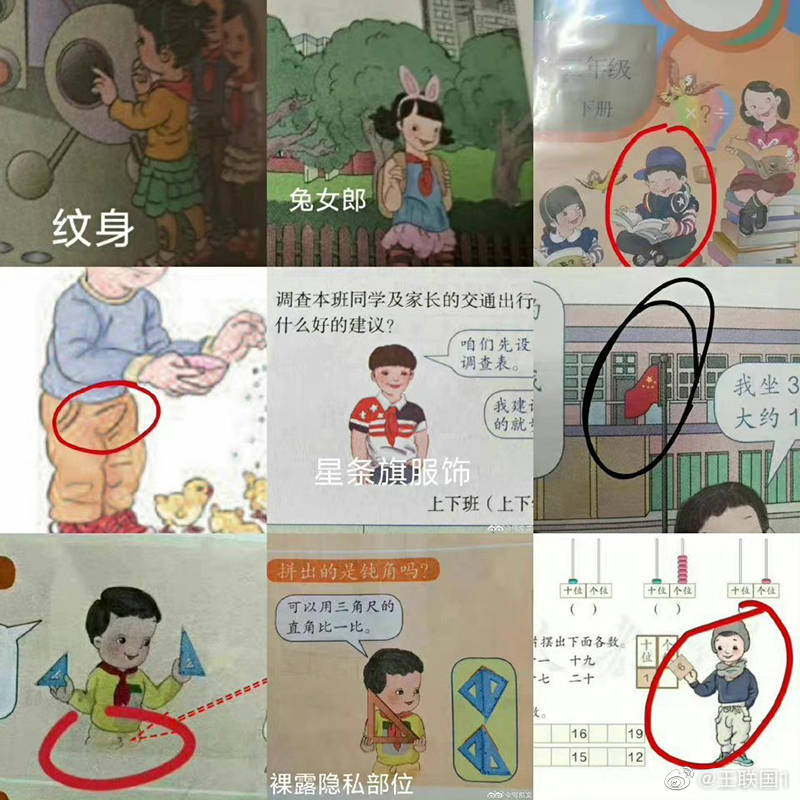 Now, three months later, China’s Ministry of Education has wrapped up its investigation into the matter and published its final findings. According to the Ministry’s research team, the textbook illustrations are found to be problematic for the following three reasons.

First, they’re ugly. They do not exactly match the aesthetic taste of the general public and do not represent the positive image that is appropriate for China’s youth.

Second, they’re not right. Some of the illustrations contain errors and are just not up to standard. 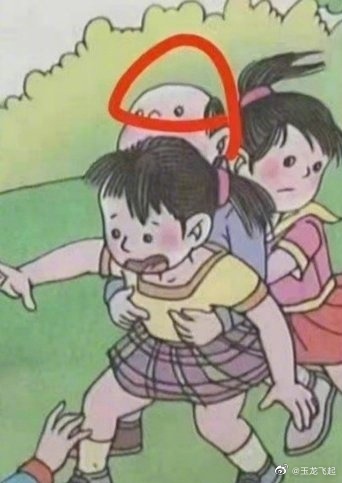 The math textbook series was approved in 2012 and published in 2013 by the renowned People’s Education Press (PEP) and designed by Beijing Wu Yong Design Studio. Designer Wu Yong (吴勇) allegedly graduated from the prestigious Academy of Arts of Tsinghua University and he also came under fire on social media earlier this year.

According to the Ministry’s research, it was found that the PEP failed to thoroughly understand, implement, deploy and review textbook standards set by the central government. They also did not timely rectify the existing problems nor paid enough attention to readers’ opinions. The Teaching Material Bureau under the Ministry of Education also was found to have provided “insufficient guidance and supervision.”

In accordance with regulations, the relevant units and 27 members of staff were held accountable for their poor performance. Among them were the Party Committee Secretary of the PEP, President Huang Qiang (黄强), who received a “serious warning” from within the Party. The Chief Editor Guo Ge (郭戈) was removed from office, along with some others, including the person in charge of the editorial office for elementary school mathematics textbooks.

Illustrator Wu Yong, along with two others designers, will also need to find another job as they will never be allowed to work on national school textbooks or other related projects again. 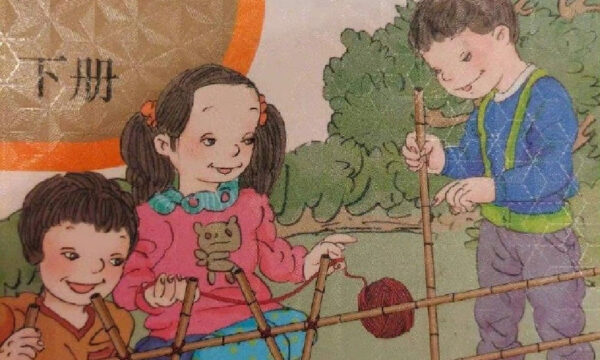 A hashtag about the research’s findings went trending on Weibo on Monday (#教育部通报教材插图问题调查结果#) and received over 280 million clicks. A hashtag about Wu Yong no longer being employed by the PEP (#不再聘请吴勇从事教材设计工作#) more than 350 million views.

Although many people are glad to read a follow-up to this story, there is also some criticism. Some people mention how the investigation is basically a departmental self-investigation since the People’s Education Press (PEP) is a publishing house under the direct leadership of the Ministry of Education. They say that some of the punishments are too light because people are just being disciplined through departmental guidelines and regulations.

Along with the conclusion of the investigation into ugly schoolbooks gate, the new schoolbook illustrations were also published on Monday. 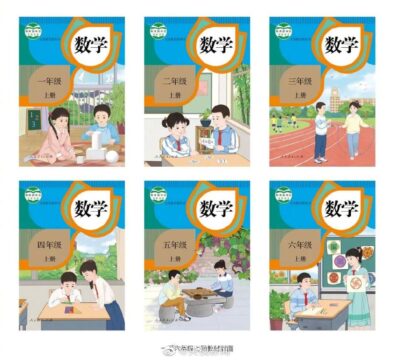 Although most social media users said the new drawing were “much better,” there were still some complaints. “They’re basic, but at least they’re normal,” some commenters wrote. 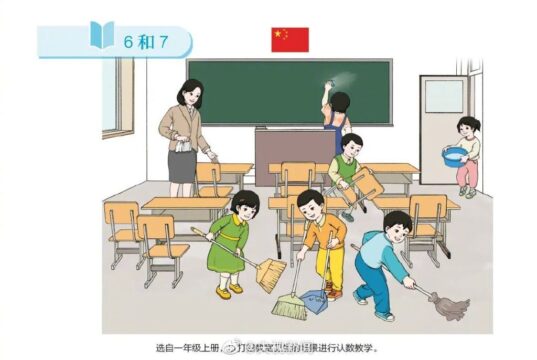 “They changed it, and it’s good enough,” some Weibo users wrote: “At least these illustrations don’t make me uncomfortable.”