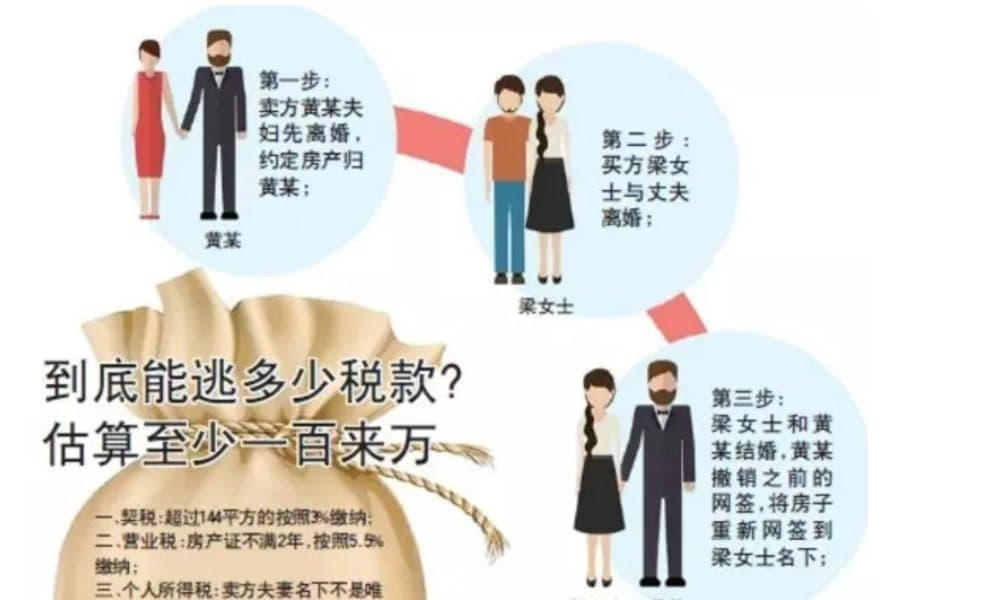 A bizarre report about two couples divorcing and ‘wife swapping’ in order to avoid paying taxes on their property transfer has become a popular news story of the day in China. While Chinese media denounce the tax-evasive real estate “shenanigans”, netizens have unexpectedly sided with the couples.

A story about two couples in Jinan, Shandong, who faked their divorce and did a wife-swap in order to evade taxes during a property transfer has become a top story on Netease, one of China’s leading online (mobile) news platforms.

The story started when couple A wanted to buy a property from couple B. They each ‘divorced’, after which the wife of couple A remarried with the husband of couple B. When ownership of their property was transferred, they divorced again, and couple A and couple B both remarried their original wives.

The comical divorce shenanigans were exposed when the case recently ended up in court. The Netease story about the couples was read 55,500 times within hours after its publication.

People in China have been divorcing to skip property taxes for years. In 2013, Chinese authorities implemented tougher taxes on home sales, as much as 20%. At the time, (international) media already reported about the following surge in divorces in cities such as Shanghai (Sweeney 2013).

Many Chinese invest their wealth in real estate – especially because property prices have been skyrocketing for years. Since divorce allows couples to split ownership of their property and then sell without having to pay those high taxes, there are those who opt for a ‘quickie’ – a no-fault, uncontested divorce. Once divorce and the division of real estate is complete, and the property has been sold, they can remarry.

In the Jinan case, the property was over 400 square meters big and worth 12 million RMB (US$ 1.9 million) when couple A wanted to buy it from couple B in the summer of 2015. Due to the size and prize, the Sina News reports, high taxes need to be paid to apply for the property’s transfer procedures.

In order to obtain the property rights in the smoothest and cheapest way possible, couple A came up with the idea to ‘swap wifes’ for the time being. Couple B divorced, attributing the property to the husband – who then married the wife of couple A. After that, husband B transferred the property to the name of his new bride, wife A, and then divorced her again only to let the two remarry their original spouses again. 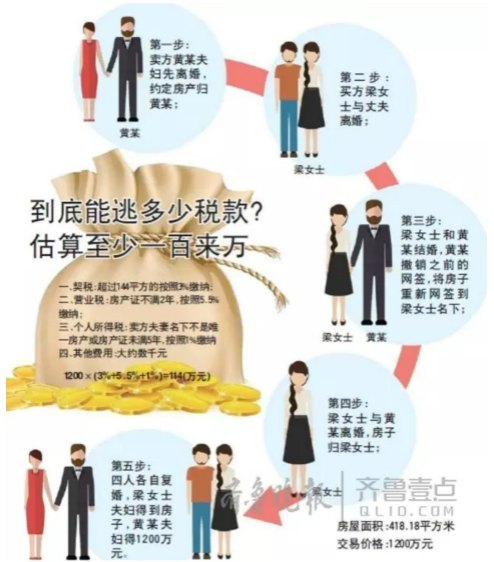 The ‘divorce scheme’ to evade taxes, image published by Netease.

The deal was to transfer the first half of the money before the fake marriage, and then the other half when the ordeal was over. Eventually, however, their plan failed when husband B made a mistake in finalizing the paperwork before receiving the final 6 million. When wife A could not come up with the 6 million RMB, husband B took the case to court.

The court, however, was not sympathetic to the couples’ ingenious plans and revoked the transfer, and fined the couple 50,000 rmb (±$8000) each for their tax evasive ‘divorce and remarry’ construction.

Although the Netease news report, that was also (originally) published on Qilu Evening News (齐鲁晚报) and on Sina News, condemned the couples, saying that “marriage registration is no child’s play” and that “legal boundaries should not be crossed for one own’s immediate benefit”, commenting netizens unexpectedly applauded the story and sided with the creative couples.

“Is this illegal?”, a top commenter (8500+ likes) responded to the story: “This should not be called tax evasion, it should be called reasonable tax avoidance!”

Many commenters point out that since neither divorce nor remarrying is illegal, it is not the couples’ fault for making use of their legal rights – and that it is the Chinese property tax laws that are to blame.

Chinese authorities do not impose regular levies on homeowners just yet; individuals are only taxed when buying or selling property. Although China’s house property taxes, which are believed to tame the housing prices, will be pushed forward, it might take another three years before their implementation (Gopalan 2018).

“These couples are just as birds in the forest,” one Netease commenter writes: “They fly when the big tax comes.”

“What did they do wrong?”, many wonder.