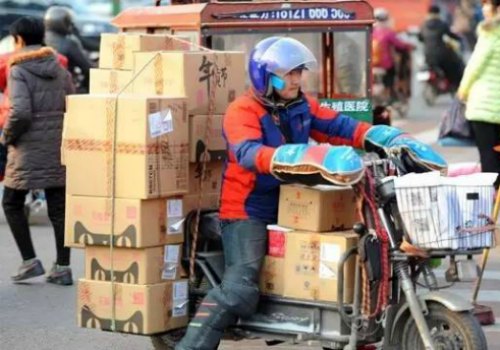 An express courier from Zhuzhou, Hunan, has suffered permanent injuries after being severely beaten by the woman he was delivering a package to. According to multiple reports on Weibo, the courier – called kuaidi in China – was beaten for being five minutes late. Couriers in China often work long hours for low pay under unsafe conditions.

On July 28, courier Guo Junliang (郭君良1) from Zhuzhou phoned up a woman named Yan X. to tell her he was coming over with her package in 2-3 minutes. The woman, waiting at the bottom of the building, was so agitated when the courier arrived five minutes later than expected, that she started hitting him with her umbrella.

The story has attracted much attention on Weibo, where it momentarily became a top trending topic (#快递员迟到5分钟被打#) on July 31.

As the woman was beating the courier, another man at the scene reportedly came over and also started hitting and kicking the kuaidi. The abuse left Guo Junliang, who works for ZTO Express (中通快递), with permanent internal injuries. As a result, he is now suffering from incontinence.

“She beat him because the weather was ‘very hot’ and she was ‘on her period’.”

The woman told Chinese reporters that she lost her temper and beat him because the weather was “very hot” and because she was “on her period.” She also said she regretted the incident. Local police are now investigating the case.

On Weibo, many people are commenting on this story: “I often have couriers coming to my door, and I really appreciate how hard they work in high temperatures. We have to be more considerate of them,” a netizen named Lapkit said.

“This society is really sick. People only care about fulfilling their own desires, without considering the difficulties of others. Very selfish!”, another Weibo user wrote.

It is not easy being a courier in China, a country that has the world’s largest market for package delivery. Earlier this year, New York Times featured an article about the life of couriers in China.

The article says there are around 1.2 million kuaidi , or express delivery, in China. They are mostly unskilled workers from China’s rural areas. Although nearly 25% of China’s couriers work over 12 hours a day, seven days a week, their work is often low-paid and unsafe.

Guo Junliang cried as he spoke to TV reporters from the hospital. “We are out in the burning sun for hours, and she says she is already tired from standing outside for 2-3 minutes. This behavior towards couriers really is abominable.”

Guo also said he still had received no apologies. Many commenters on Weibo said they found the incident “inconceivable.”

“Her phone number should be blacklisted by all delivery companies so that no kuaidi ever needs to serve her again,” many wrote.

1 According to written media reports, the name is Guo Junliang (郭君良), but in his tv interview the courier was cited as Peng Junliang (彭君良).

Playing Around with Tencent: Chinese Parents are Losing a Fortune on Mobile Games

“Making the Most of Every Second”: Man Visits Prostitute during Dinner with Wife