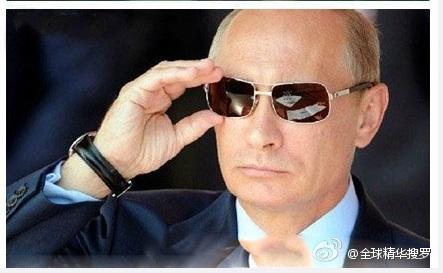 Trending on Sina Weibo today is the behaviour of American President Barack Obama and Russian President Vladimir Putin during their official stay in Beijing for the Asia Pacific Economic Cooperation summit this week. They both allegedly put their host, President Xi Jinping of China, in an awkward situation. 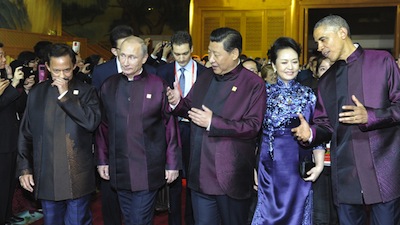 Obama’s visit to Beijing became somewhat cloudy when he declined the ride arranged for him by the Chinese government upon his arrival on November 10, in favor of a US-supplied vehicle.

But the fact that the president chewed gum throughout his visit sparked more online criticism – Sina even turned it into a news item. Netizens responded in several ways. Some took his gum-chewing as a sign of nervousness, others a sign of bad manners. One netizen wondered if Obama would also continue chewing gum if he were on an official visit to Singapore.

President Putin also sparked a storm of online criticism when he offered his shawl to first lady Peng Liyuan during a chilly evening in Beijing. The incident was broadcasted by CCTV but later censored, as the incident supposedly made Putin appear chivalrous and Chinese governmental staff discourteous. Some media sources even assert that President Putin, who was recently divorced, was flirting with the first lady. 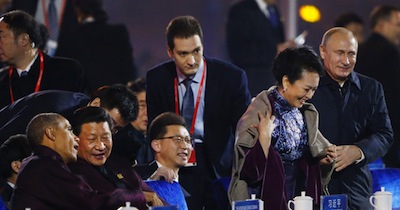 Putin offering a shawl to Peng Liyuan, wife of Xi Jinping who is pictured on the left talking to Barack Obama (NYmag).

The incident has led to much ridicule amongst netizens, who make up their own texts to accompany the picture of the concerning moment. Many also humorously applaud Putin for being such a “gentleman”, providing pictures of Putin also giving a shawl to Chancellor of Germany, Angela Merkel, and many pictures of Putin feeding or cuddling animals, riding horse, and wearing sunglasses (pictured below). As one netizen mockingly says: “Putin is a ‘real man’ who will melt the heart of any schoolgirl.” 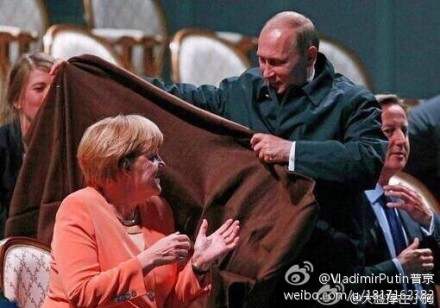 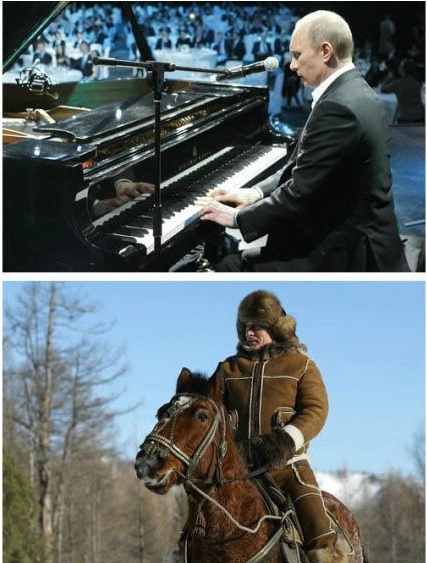 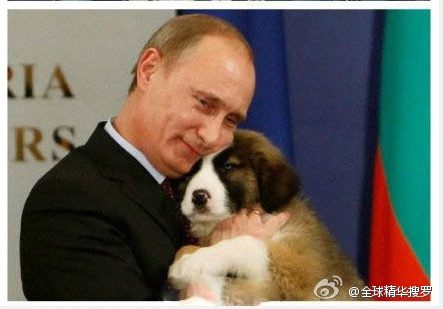 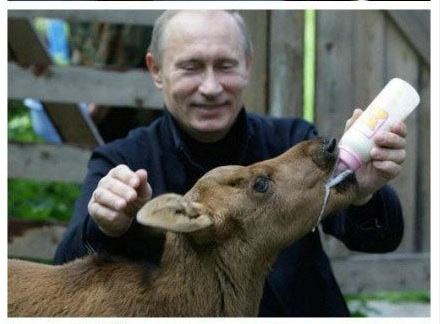 On Chinese social media, the Chinese balloon is seen as a weather device that ended up measuring the temperature of China-US relations. 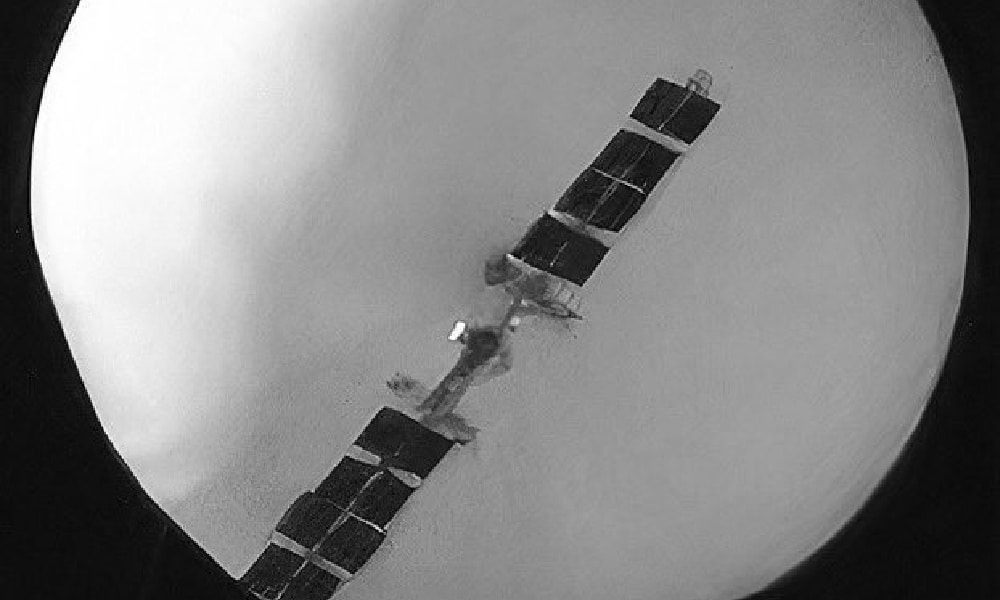 A day after the U.S. military shot down a Chinese balloon off the Carolina coast, the ‘balloon incident’ is a hot topic on Chinese social media, as official media are publishing about the incident and social media users are discussing it.

At 8:17 in the morning on Feb. 5, the Chinese Ministry of Foreign Affairs published its response to the shooting down of the Chinese balloon on Weibo.

They expressed “strong discontent and protest” over the American use of force to attack the “civilian unmanned airship” (民用无人飞艇) after Chinese officials recurringly informed the U.S. side that the balloon – described as a weather device, – had accidentally entered the U.S. and did not pose any threat to the U.S. whatsoever (#外交部就美方宣称击落中国无人飞艇发表声明#).

On Chinese social media, as also described in our earlier article on the incident, the balloon has come to be referred to as the “Wandering Balloon” (流浪气球) in the context of the box-office hit The Wandering Earth II.

At the same time, China celebrated the Lantern Festival (元宵节) which marks the first full moon of the Chinese New Year. It is tradition to eat glutinous rice balls and enjoy lanterns floating in the sky.

The balloon incident set the Chinese social media meme machine in motion, in which the balloon, The Wandering Earth II, and the Lantern Festival all came together in various images that circulated on Weibo and beyond. 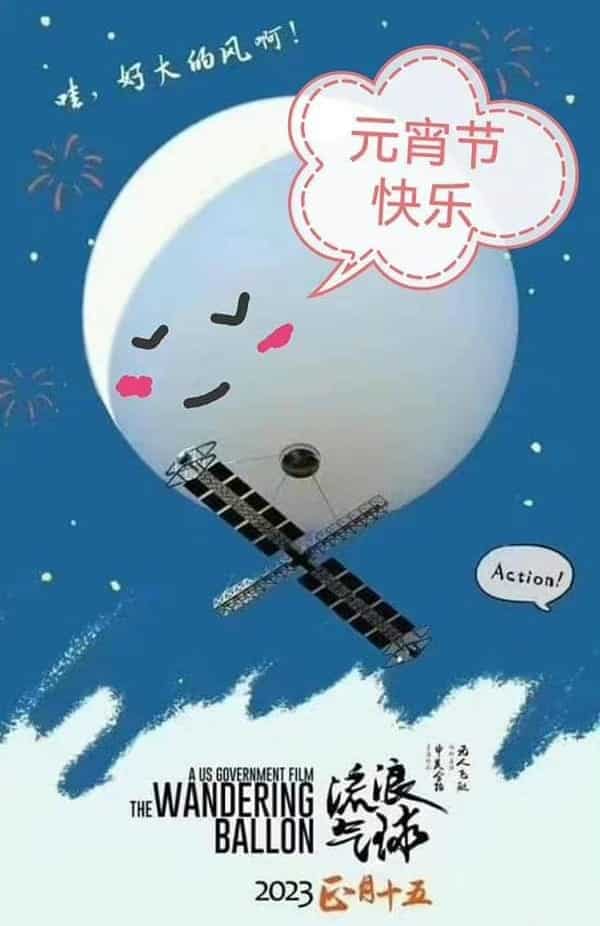 The balloon, featured in ‘The Wandering Balloon’ movie produced by ‘US Government’, wishes everyone a happy Lanern Festival. 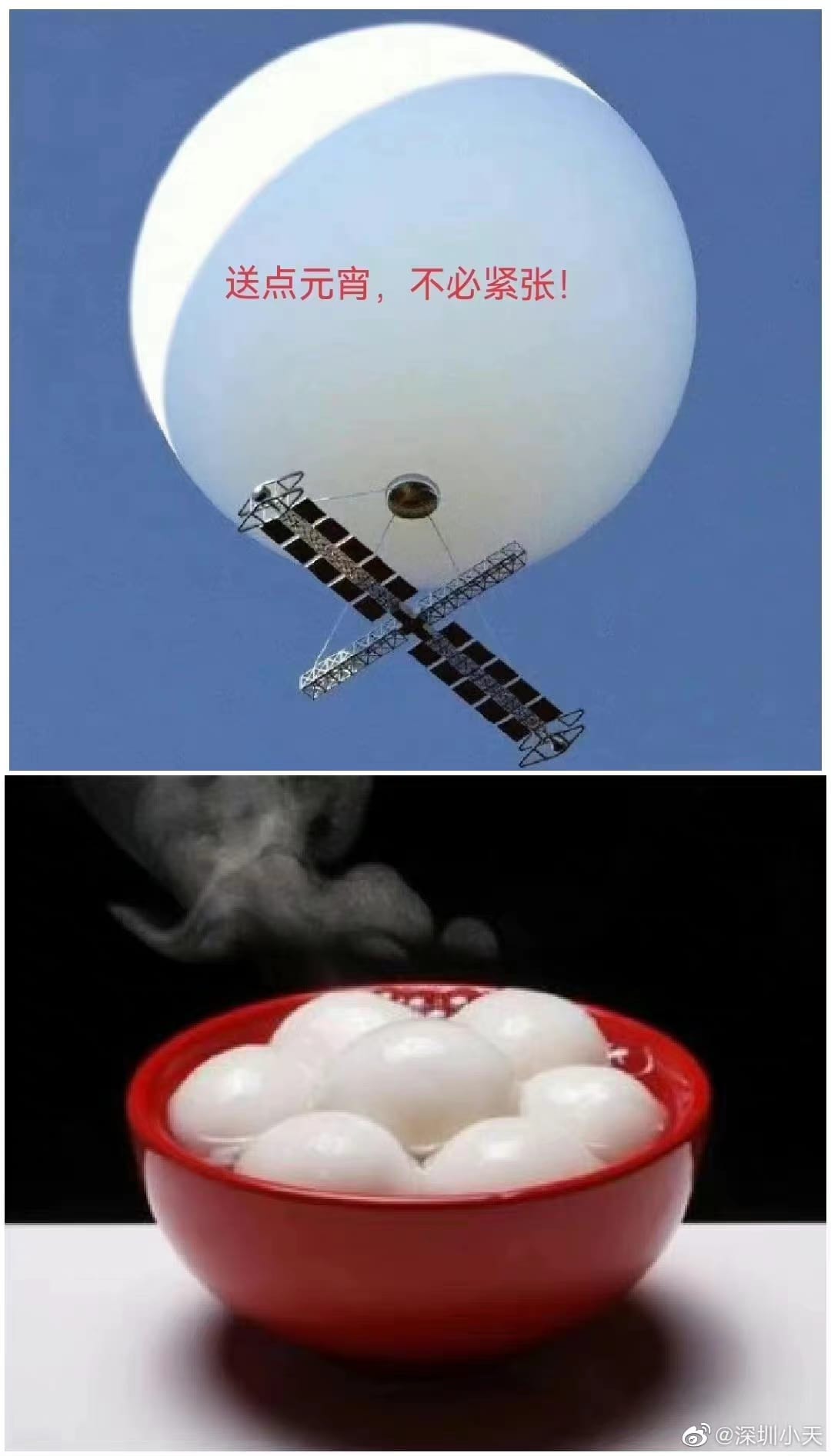 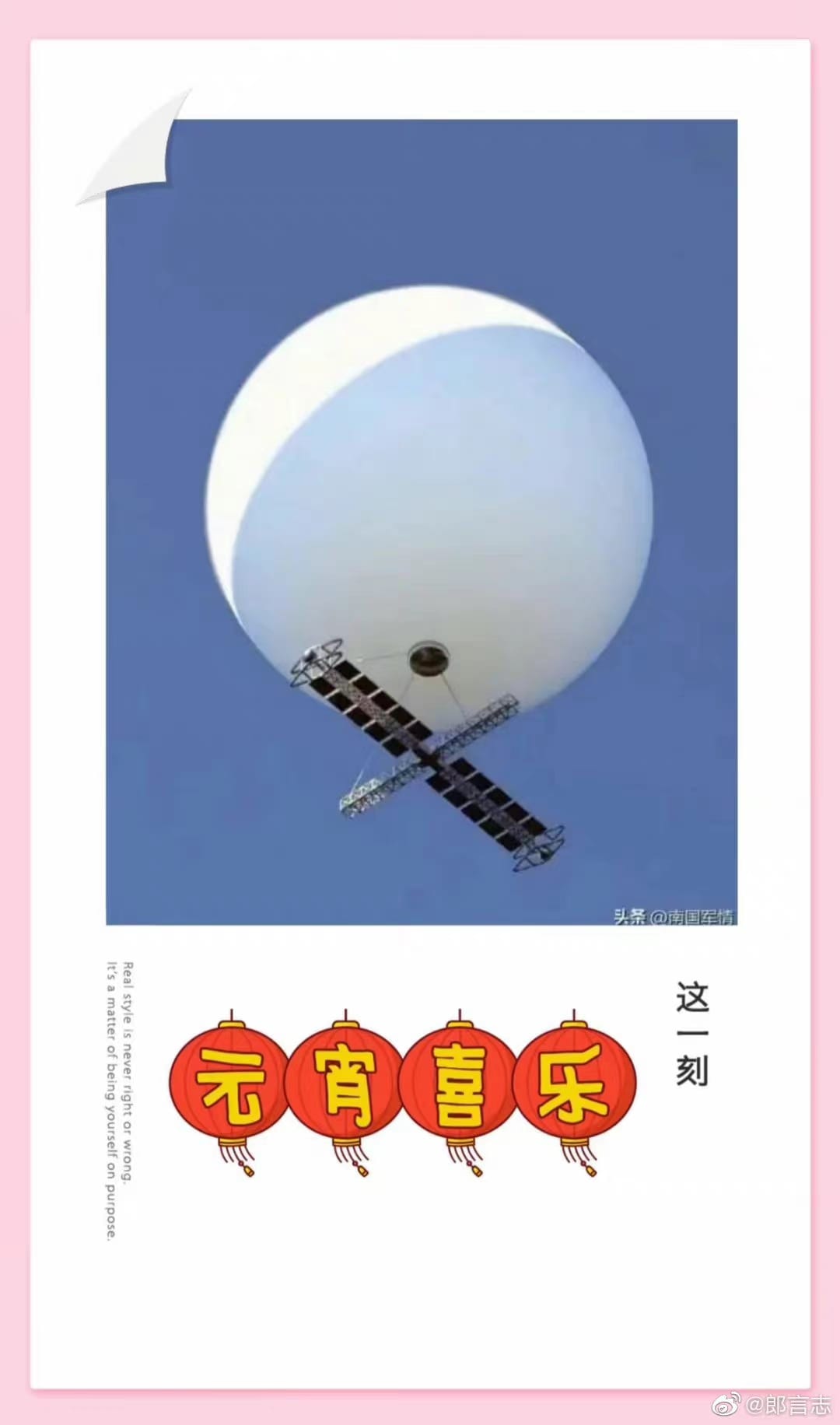 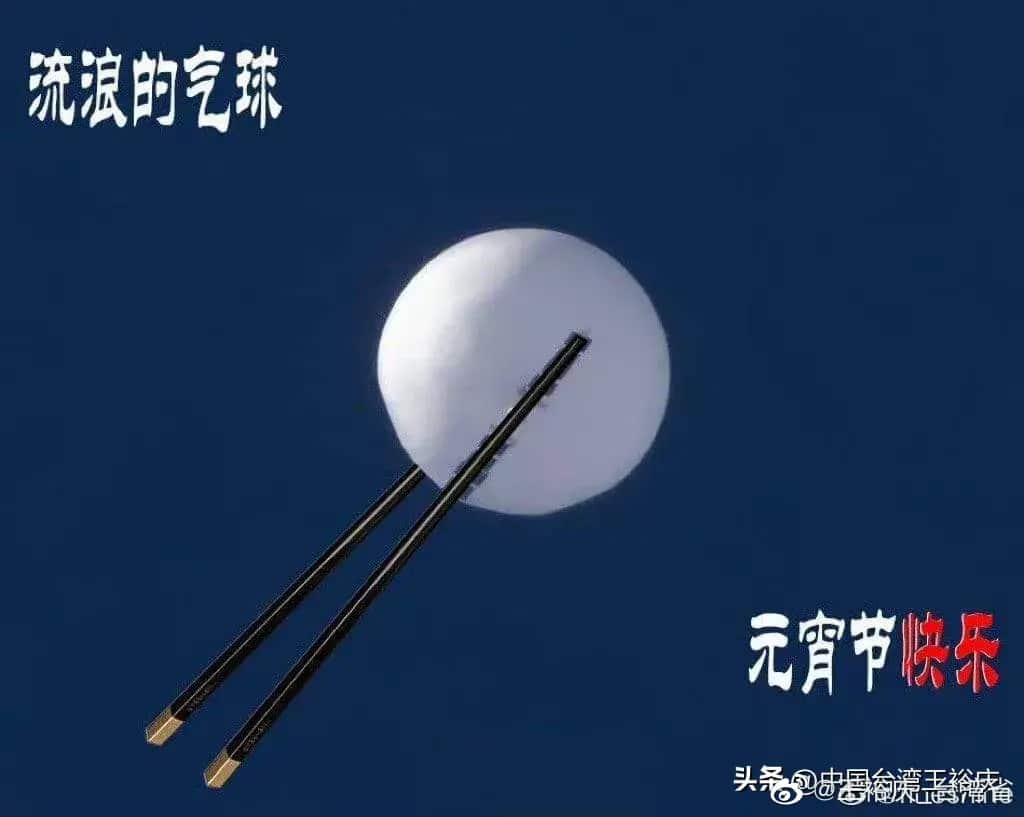 The Weibo hashtags used to discuss the incident were mainly initiated by Chinese (state) media outlets, such as “The U.S. Side Claims to Have Shot Down Chinese Unmanned Airship” (#美方宣称击落中国无人飞艇#); “America Uses Military Force to Attack Civilian Unmanned Airship” (#美方宣称击落中国无人飞艇#); “The U.S. Side’s Insistence on Using Force Is Clearly an Overreaction” (#美方执意动用武力明显反应过度#).

“Is it a balloon or an airship? The American official and media side all claim it is a spying balloon; the Chinese side claims it is an civilian unmanned airship,” one blogger wrote, showing the different media contexts in which the incident is being discussed and emphasizing the importance of the vocabulary used.

Words matter, and at a time when there is a lot of speculation about the incident, the seemingly humorous way in which Chinese netizens have responded to the international dispute also relates to the language that is being used to describe the event.

On Chinese social media, the majority of commenters see the balloon as a weather device that went wandering and, unexpectedly, ended up measuring the temperature of Sino-American relations – which turned out to be icy cold.

Some examples of the kind of phrasing that matters in the Chinese media context:

The balloon in question is described as a “civilian unmanned airship” in Chinese official and state media texts. The word ‘civilian’ (民用) is included in the clarification about the balloon being a civilian meteorological balloon, and thus not serving any military purposes (民用 ‘civilian’ versus 军用 ‘military’).

The U.S. military shooting down the Chinese balloon is also phrased as an “attack” (袭击) in many Chinese media reports as well as in the official Foreign Ministry post.

The expressions “completely by accident” (完全是意外), “unexpected circumstances” (意外情况), and “force majeure” (不可抗力) are used in official Chinese media texts describing the balloon incident to underline that the circumstances in which the device floated into American skies was not only unrelated to military / government purposes, but that it was also unintentional.

The Chinese balloon incident is also referred to as the “Wandering Balloon” on social media at a time when ‘Wandering Earth II’ is trending. 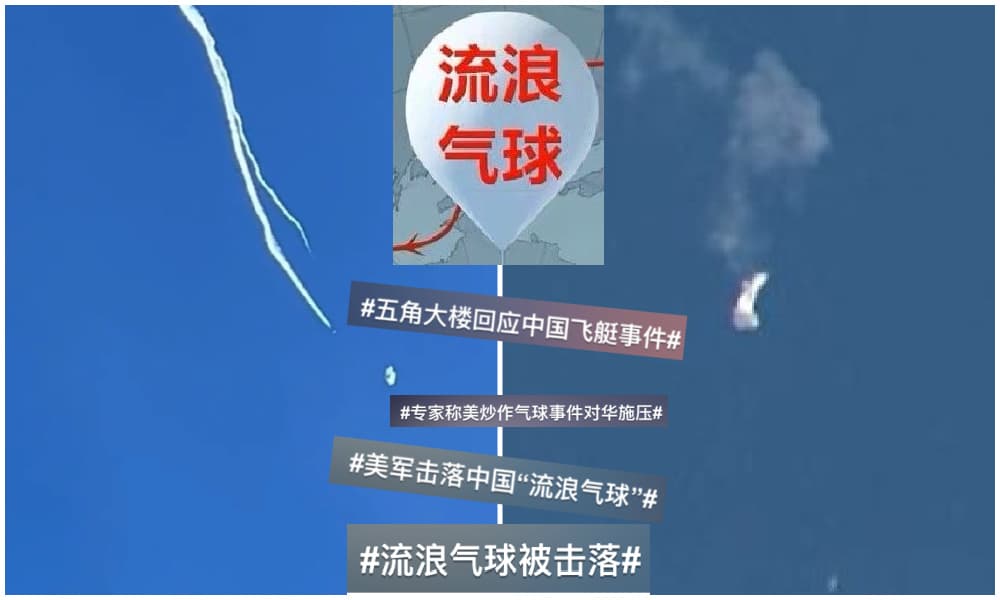 The 2023 “China balloon incident” has gotten so big over the past few days that it already has its very own Wikipedia page now.

On Feb. 2, 2023, it was announced that a Chinese “surveillance balloon” was traveling over the northern United States. Later, it was reported that a second Chinese balloon floated over Latin America.

As a consequence, U.S. Secretary of State Antony Blinken called off a scheduled visit to Beijing, calling the presence of the Chinese balloon “an irresponsible act.” The balloon has also been dubbed the “Chinese spy balloon.”

On Sunday morning after 4 AM China local time, news came out that the U.S. military had shot down the Chinese balloon off the Carolina coast after the coastal area of North and South Carolina had been closed for the national security operation.

In an earlier statement on Friday, Chinese officials referred to the balloon as a civilian “airship” (“飞艇”) used for weather monitoring and meteorological research that deviated from its original route due to the wind. The incident, therefore, is also described as the “Chinese Airship Incident” (“中国飞艇事件”) by Chinese media outlets.

On Chinese social media, the issue is referred to as “the balloon incident” (“气球事件”) or the “balloon problem” (“气球问题”), and many netizens think it is all about “making a big issue over nothing” (“小题大做”).

The balloon is also nicknamed “the wandering balloon” (流浪气球) in light of the current Chinese box office hit The Wandering Earth II. One of the hashtags used to discuss the events was “The Wandering Balloon II” (#流浪气球2#).

Chinese political commentator Hu Xijin, who frequently posts on social media, suggested earlier that the U.S. side allegedly is very well aware that the Chinese balloon – which accidentally went “wandering” – actually “poses no threat” and that ongoing reports about the balloon were purposely being used to create an anti-Chinese narrative.

Hu’s reasoning is similar to that of Chinese International Relations Professor Li Haidong (李海东), who claims that the balloon story is framed as a threat in order for the U.S. to gain an advantage in bilateral negotiations (#专家称美炒作气球事件对华施压#).

Following news reports about the Chinese balloon getting shot down, some Weibo commenters jokingly lamented that the “poor baby balloon” had been ruthlessly shot down without even getting the time to float around.

“Such a pity,” some wrote, with others suggesting it’s “just a stray balloon.”

There are many online jokes about the incident, such as those saying that the Chinese people thought the sci-fi blockbuster Wandering Earth II was the current film hit and that they had not expected the ‘Wandering Balloon’ to be the actual hit of the moment.

The fact that the current Chinese balloon developments trigger so many online comparisons and memes related to the sci-fi film Wandering Earth II perhaps doesn’t come as a surprise, since the movie has been among the hottest trending topics of the past week, and considering its narrative is all about catastrophic events and the future of international society.

Others comment that since this is the time of the Chinese Lantern Festival (元宵节), celebrated on the fifteenth day of the first month of the Chinese New Year, the incident is just another way of wishing everyone a happy new year.

All jokes aside, there are also bloggers who see the incident as a more serious occurrence at a time of worsening Sino-American relations, suggesting the significance of this matter “can’t be underestimated.”

There it goes. Footage of the Chinese balloon shot down by US military now also all over Weibo. pic.twitter.com/9jWOTKev7d

For more updates on this story, see this article. 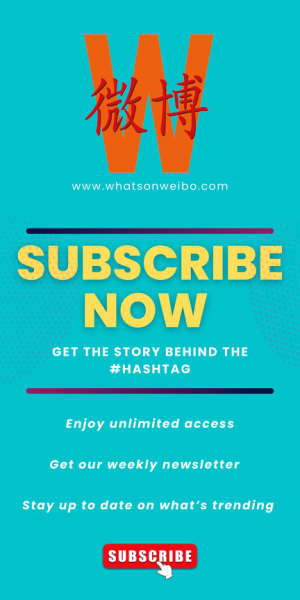 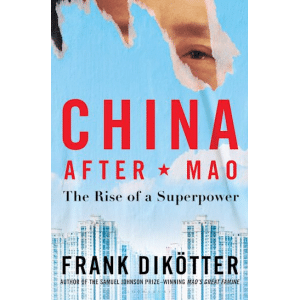