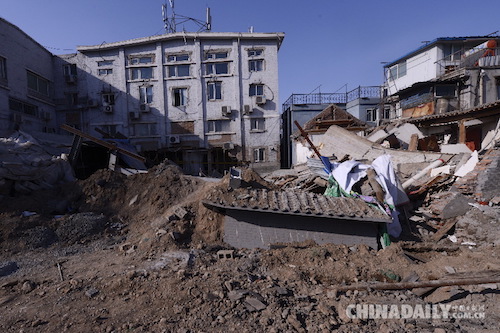 Trending on Sina Weibo this week was a 10-meter deep hole that appeared in a street in center of Beijing on January 24th. The ‘sinkhole’ appeared in front of a courtyard at 93 Denei Avenue, a culturally significant old street with many buildings designated as ‘cultural relics’ by the government. As a result, the courtyard and four houses to its north collapsed. No one was hurt in the incident.

It was later revealed that the ‘sinkhole’ did not have a natural cause. The owner of the courtyard, named Li Baojun, had constructed a 18-meter deep basement under his house without a permit. City authorities had previously warned Li not to build below the ground level of his courtyard, only two kilometers from the Forbidden City.

The underground construction was carried out by unqualified workers and without proper supervision, undermining the foundation of the buildings near it. When the unfinished basement caved in, it also brought the other houses down.

The incident stirred public outcry, especially when netizens discovered the status of Li Baojun. Li is one of the deputies of the National People’s Congress, the supreme organ of state power in China. Besides being a People’s Congress representative, Li is also the president of a law company worth over US$300 million.

Angry netizens wondered why Li had wanted to construct the basement in the first place and how he could have disregarded the law and the safety of his neighbours. The sinkhole swallowed four houses, reportedly making fifteen people homeless. A total of 1,400 cubic meters of concrete were needed to fill the hole. Authorities have yet been unable to locate Li.

Construction projects in China must officially be approved by local authorities. But since laws are poorly enforced, it is common for people to build basements without government consent.

[box]This is Weiblog: the What’s on Weibo short-blog section. Brief daily updates on our blog and what is currently trending on China’s biggest social medium, Sina Weibo.[/box]

©2014 Whatsonweibo. All rights reserved. Do not reproduce our content without permission – you can contact us at info@whatsonweibo.com.