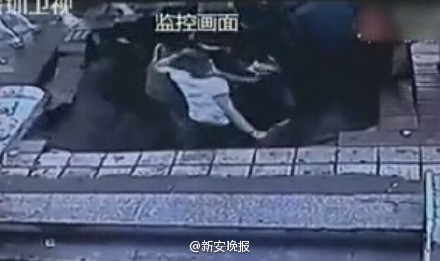 A sinkhole in Harbin swallowed 4 people who were waiting for their bus this weekend. Security cameras captured the frightening moment.

On August 27, a handful of people was waiting at a busstop in China’s northeastern city of Harbin, when the ground underneath their feet suddenly collapsed. Security cameras have captured the incident.

The incident happened within seconds; one moment people are waiting for their bus to arrive, and in the blink of an eye they have been swallowed by the sinkhole. The footage shows one person holding on to an underground pipe. Bystanders were able to pull the people out. Four of them have been treated in the hospital for minor injuries on their shoulders and legs.

According to reports, the sinkhole was approximately 3 meters deep.

The Harbin sinkhole is another incident in a series of bizarre bigger and smaller incidents. Weibo user Zheng refers to, amongst others, the Tianjin explosions on August 12.

On July 26, a 30-year-old woman died when the top of an escalator at a Jinzhou department store suddenly collapsed. A few days later, a young woman was killed in Hangzhou when the elevator she was entering suddenly went up.

It is also not the first time people have been hurt by sinkholes in China. In 2013, five people were killed when the ground in Shenzhen collapsed. The hole was 4 meters deep. In the same year, a truck was swallowed by a sinkhole in China’s southern province of Yunnan.