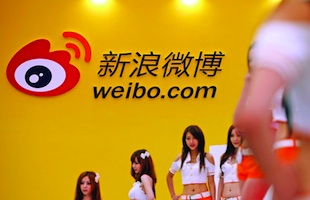 Welcome to What’s on Weibo. This blog is the result of an idea I have had for over a year. I have lived in China for over 1,5 years and acquired many Chinese friends. As a native Dutch, mainly using social media sites such as Twitter and Facebook, I have often felt excluded when my Chinese friends would talk about popular topics discussed on the social media site they most often used; Sina Weibo. I have used this blog as a personal challenge to keep myself up to date with the popular culture of today’s China. Besides that it is meant as a source of information for those who are interested in China’s current social media affairs, but who do not have the linguistic and/or cultural background knowledge to get ‘behind the scenes’. 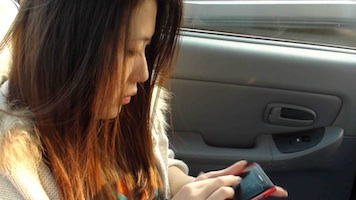 I welcome you as a frequent visitor to this site. If you have any suggestions or comments, please send me a message through the contact page. 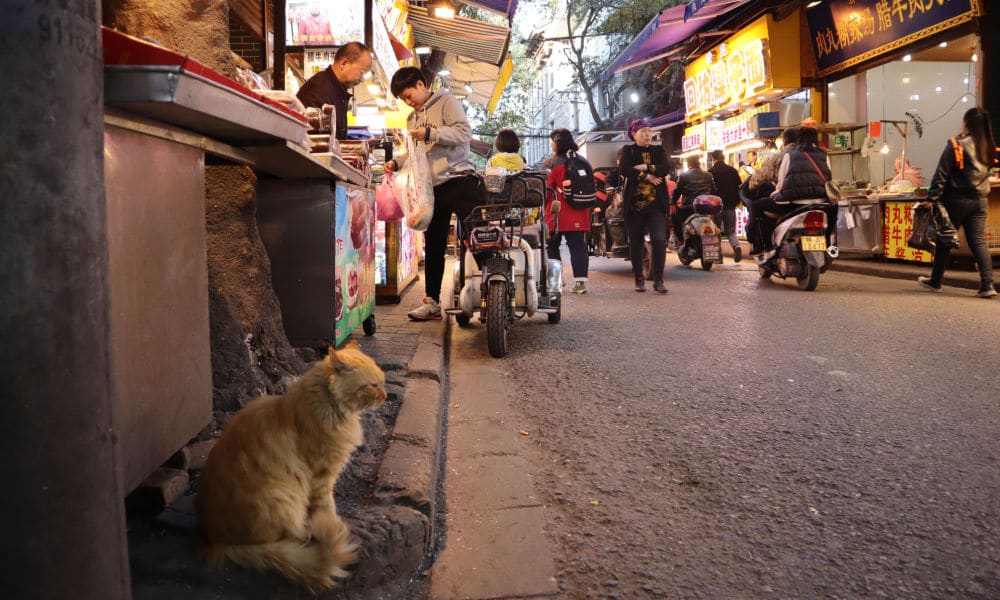 Just a day after a horrific story of a Chinese security guard pouring scalding water over a pregnant cat went viral on social media, the call for legislation against animal abuse is top trending on Weibo.

The state media outlet stated that society is against animal cruelty, but that this opposition can now only exist on a “moral level,” rather than legal. “Whenever animal cruelty happens, people can only condemn it,” CCTV wrote, adding that they look forward to seeing laws against animal abuse be implemented as soon as possible.

China currently has no laws preventing animal abuse. But over the past few years, the voices calling for the legal protection of animals in China have become louder.

Every now and then, extreme stories of animal abuse become the topic of the day on Chinese social media. Sometimes, Chinese netizens take matters into their own hand; they spread personal information on the animal abusers online. This phenomenon where Internet users hunt down and punish people is known as the ‘Human Flesh Search Engine‘, and it often comes into action in cases connected to animal cruelty.

In one 2016 case of a man abusing a dog, for example, a group of animal welfare activists traced the man down, dragged him out of his house and publicly shamed him and beat him up.

In 2017, netizens cried out for rapid implementation of animal welfare legislation in China after a heartbreaking video of a young girl holding her killed dog went viral on social media. Her dog was shot by a neighborhood guard with an air gun.

Two years ago, another brutal case of pet killing also shocked Chinese social media users, when a Chongqing man threw his golden retriever and a pregnant cat from the 21st floor of his apartment building. The man allegedly committed the cruel act after learning his wife was pregnant and not wanting her to keep pets in the house.

This week, it was captured on video how a security guard in Shandong, Taiyuan, poured boiling water over a pregnant stray cat while she was captured in a cage. The cat was treated at a local animal hospital, where vets found that all of her unborn babies had died. The mother cat died soon after. After the story became trending, Chinese netizens soon exposed the man’s address and personal details. The man has since been fired from his job.

Trending on Weibo today is the very cruel incident (captured on video) of a man pouring scalding water over a stray pregnant cat. People are furious, now sharing all his personal information online. Don't fu*k with cats! pic.twitter.com/mIlfp8S2qw

As the many social media stories and trends over recent years have shown, this is definitely not the first time for people to call for animal abuse laws. It is more uncommon, however, for a state media outlet to make such a statement.

CCTV also asked Weibo users whether or not they would support an animal welfare law, with virtually all commenters responding that they would also like to see such laws be implemented as soon as possible.

“People who abuse animals have serious problems, legislation is needed,” some Weibo users wrote, with others saying: “[These laws] need to come soon, we need them now, and I hope they’ll be strict.”

However, there is also skepticism about CCTV’s call for immediate legislation on animal abuse.

“When I was studying at university this was already called for, but we’ve waited so many years already,” one lawyer writes: “I haven’t seen any progress being made.”

Others also comment that “the law is always lagging behind.”

Read more about discussions on animal rights in China here.

The girl said she wanted to test out the generosity of her date. 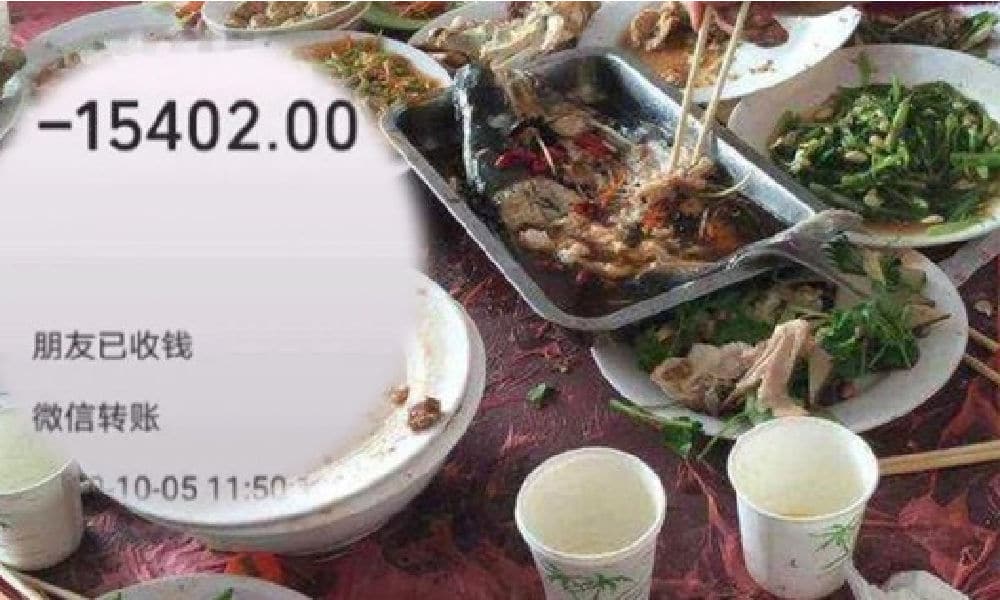 An expensive blind date has become top trending on Chinese social media platform Weibo, after a girl allegedly brought 23 of her relatives and friends to the dinner. The restaurant bill was 20,000 yuan – close to 3000 USD.

According to China Newsweek Magazine (中国新闻周刊), a man by the name of Xiao Liu had asked the young woman out for dinner, saying it would be his treat. The girl then unexpectedly showed up with an entire crew, saying it was to “test out” Liu’s generosity.

Xiao Liu is a 29-year-old man from Zhejiang province. Struggling to find the time to date with his busy work schedule, Liu’s mother hired a matchmaker to find a suitable potential girlfriend for her single son. The incident happened during a date that was set up by this matchmaker.

The story was originally published by local media outlets Taizhou Evening News (台州晚报) and Qilu Evening News (齐鲁晚报) on WeChat. These sources report that Liu took off without paying once he saw the restaurant bill, quickly turning off his cellphone afterward.

Since Liu left the ‘dinner date’ without paying, the woman was stuck with the bill.

In an attempt to solve the situation with Liu later on, the young woman said she was “willing to go Dutch” on the bill. Liu refused but was still willing to pay the 4398 yuan bill (660 USD) for two tables, leaving the girl with the rest of the 15,402 yuan bill (2305 USD). 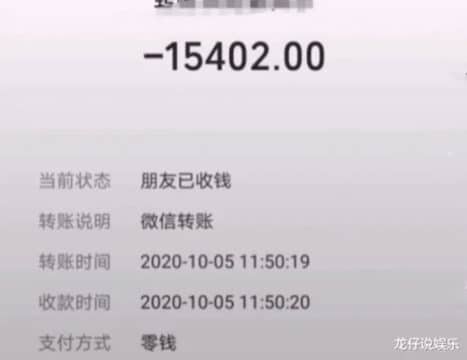 The girl reportedly turned to her relatives for help in paying the bill. Screenshots of the WeChat group chat were apparently leaked online, with some group members showing unwillingness to share in the high bill, saying that they did not smoke nor drink and just had a bite to eat – and that it was her who invited them in the first place. 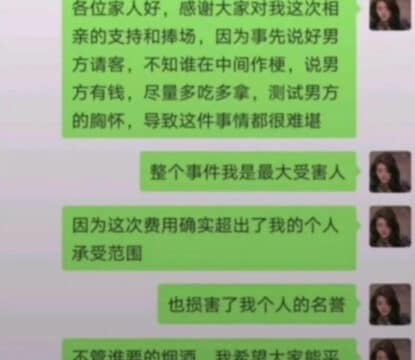 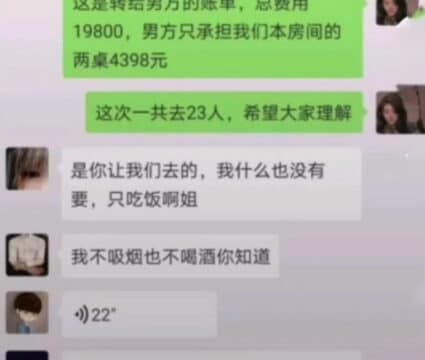 On Weibo, the topic attracted 260 million views on Tuesday, with most commenters siding with Liu and condemning the girl.

Despite the online interest in the topic, there are also some netizens doubting whether or not the story is real. Although screenshots were shared by online media, the actual source of the story remains unknown. It is also not disclosed where or when the incident took place.

The fact that the story was also shared by some official (local) media makes people think that perhaps it was just posted as clickbait.

“Even an idiot would never bring 23 people to a date,” some commenters say.

It is not uncommon for these kinds of interpersonal incidents to go viral on Chinese media.

In 2016, one Shanghai girl was so disappointed about what her boyfriend’s parents served her for Chinese New Year, that she ended her relationship because of it. The story went mega-viral, reinforcing the ‘demanding leftover woman’ media cliché.