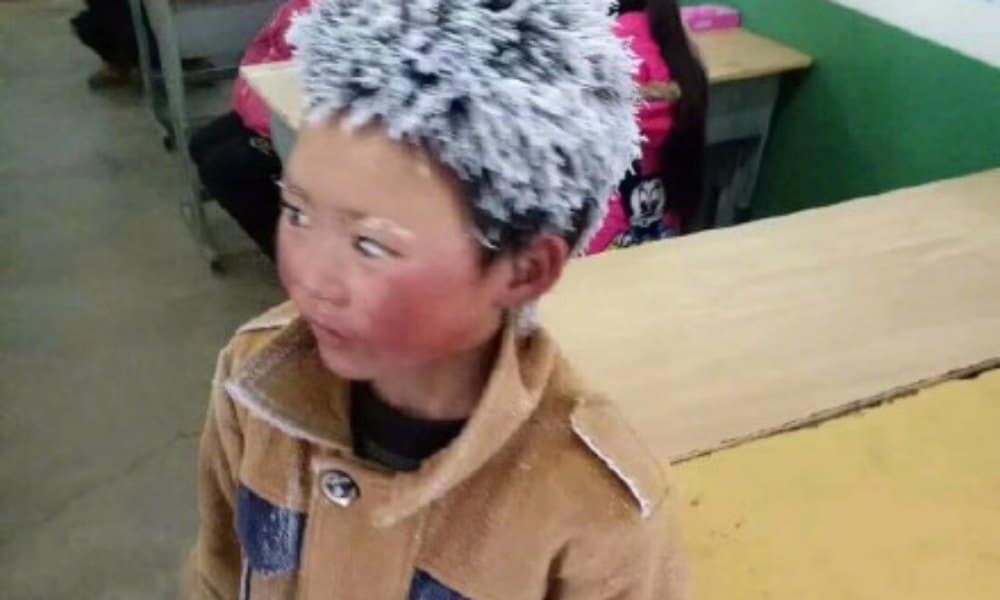 A young boy from Yunnan has attracted the attention of Weibo’s netizens this week for his ‘icy looks’ after walking to school in -9 degrees Celsius.

The boy is from Xinjie Town in Ludian County Zhaotong, Yunnan Province, and has to walk a mountainous track to his school for 4,5 kilometers every day.

People’s Daily reports that a photo of the boy went viral on January 9 on Chinese social media, after the teacher sent it to the school’s headmaster. 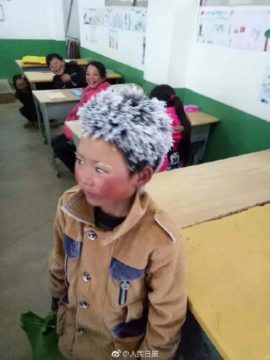 It shows the third grader with frozen hair and eyebrows, and a red face. The school children in the back are laughing.

The school has not disclosed the boy’s name to protect his identity, but the principal did tell Chinese media:

“The temperature was minus nine degrees that morning, and it was the first day of the finals exams. The temperature had dropped within half an hour, and his home was already far away, so when he arrived in the classroom his hair was covered in frost. It’s a cute kid and he made a funny face when he came to the classroom, making his classmates laugh..” 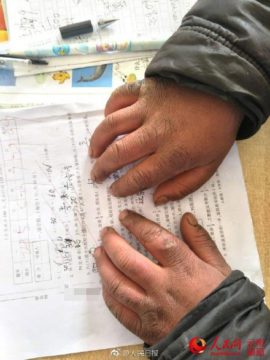 The school also confirmed that the boy’s parents are laborers who work away from home, and that the boy lives together with his brother and sister as so-called “left-behind children” (留守儿童).

The area around Ludian county is relatively poor. In 2014, the area was hit by 6.5-magnitude earthquake, killing more than 600 people and destroying about 80,000 homes

The phenomenon of China’s “left-behind children” are a result of the country’s rapid urbanization, as people leave the countryside to find work in the cities. Having no means to look after their children while parents are working in urban areas, they often choose to leave their children in the countryside, where other family members can take care of them.

The National Health and Family Planning Commission released a report in 2015 estimating that there are more than 61 million left-behind children in China. 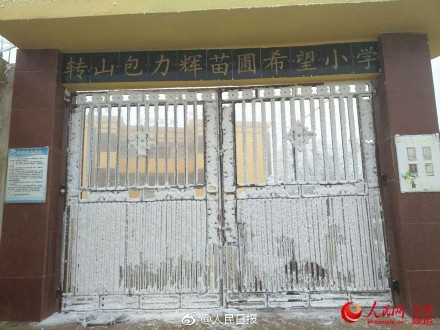 Another result of China’s urbanization is that smaller rural schools are closing their doors. Last year, the story of one teacher who kept a school open for two remaining students also became trending on Weibo.

The principal of ‘ice boy’s’ school also told a People’s Daily reporter that there currently is no heating at their school, but that they are doing all they can to arrange a heating system. 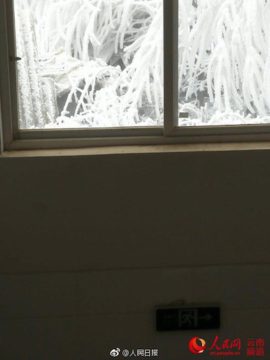 On Weibo, many netizens are concerned about the ‘ice boy’ (#冰花男孩#) and his fellow students and are offering to donate money, clothes, or other items to support the school.