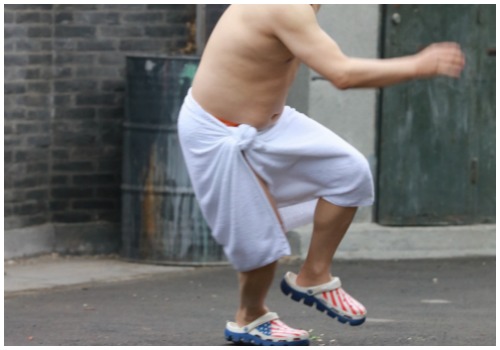 A man running around with just a bath towel in the hutongs of Beijing has caught the attention of Chinese netizens, who have numerous explanations for why this man would streak in the hutongs.

On May 31st, a young man was caught running around Beijing’s hutongs naked. Bystanders photographed the streaking incident, that took place in the central Houhai area. The topic made it to Sina Weibo‘s top trending topics on July 2nd under the hashtag of ‘Houhai Streaker’ (#后海裸奔男#). 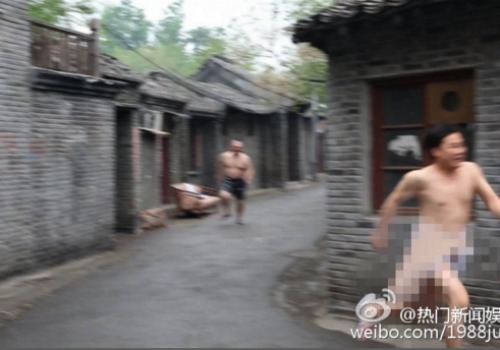 Witnesses stated the man was saying something while he was running around, and that they were not sure if he was being chased.

According to Global Times, the appearance of the ‘bath towel man’ has caused quite some discussion on social media networks in China. Over the past few years, there have been numerous streaking incidents that made headlines in China – some streak for the sake of art, some because they are drunk or have mental issues. “What was this man’s reason?”, Global Times asks.

“Are you sure they were not just shooting a movie?” one Weibo user wonders.

“Maybe a couple was caught in the act,” another netizen speculates. Or: “He was probably bored.”

“He just has a heroic nature,” one commenter says.

Earlier this year, another streaking incident made the news when five men were caught running naked in Wuhan early in the morning. According to Jiangsu news, the men did this to stay young and fit. 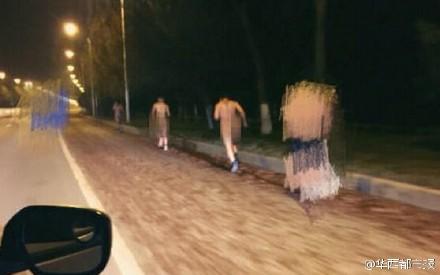 In 2013, two young men were caught while streaking on the campus of Peking University while carrying sex dolls with them. 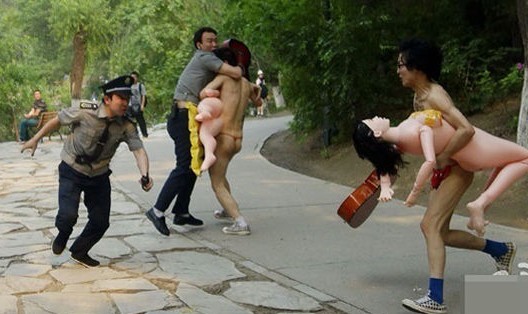 According to Chinese laws, people can be detained for 5-10 days for deliberately showing their naked body in public or for exposing their genitals. In cases where these obscenities involve children under the age of 14, or other more serious circumstances, the custody will range from at least 10 to 15 days. Streakers suffering from mental health problems will not be detained, according to China’s Financial Magazine.

When an older man living in the hutong where the recent Beijing streaking occurred was interviewed by Global Times, he reportedly said: “I’ve seen this streaker running around many times before. What he’s doing this for is something we as older people discuss a lot – young people nowadays just are so free-spirited.”