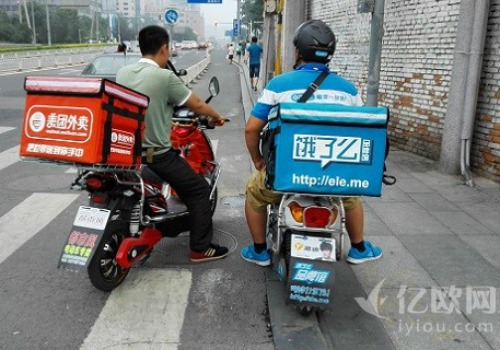 China’s food delivery app market has been booming over the previous year. Apps like Eleme, Meituan and Baidu Takeout have made ordering food a piece of cake. But China’s popular food apps are under scrutiny now that Chinese media exposed that these apps illegally sell food from unqualified vendors.

Ordering food in China’s urban areas has never been so easy. Apps like Eleme (roughly meaning ‘Hungry Now?’) or Meituan make it possible to order virtually anything you want from restaurants and shops in the vicinity and have it delivered on your doorstep. The variety of choice depends on one’s location – there are more vendors to choose from within the app in city centers of, for example, Shanghai, Beijing or Tianjin, than the available options in their suburbs.

But once you’re in the right spot, there’s a ton of options. Due to the hyped market, there are competitive prices and vendors often offer deals and discounts to lure customers. Eleme and Meituan allow users to order anything from pizza to Mexican, from dim sum to sushi. Besides food, the apps also have options to buy beverages and alcohol, different kinds of medicine (including the morning after pill), face masks for smoggy days, or sex toys for hot nights.

Pizza and pills? Food order app Meituan also sells the morning after pill. For 32RMB (5$) delivered at your door. pic.twitter.com/KrSXMES1i0

According to Chinese media, Eleme and Meituan are involved in illegal business by selling food from unlicensed restaurants.

Local restaurants can apply to sell their goods through these popular food apps. Especially now that cities like Beijing have been cracking down on street food, selling food door-to-door and being relatively ‘invisible’ to authorities is an appealing way to make money for many vendors.

After the CCTV programme aired on Tuesday, the food and drug administrations in Shanghai and Chengdu stated on Wednesday that they have launched investigations into Eleme, China Daily reports. CCTV reported on Weibo that Beijing authorities will also investigate different food order platforms in the capital. Meanwhile, Eleme’s vice president Guo Guangdong (郭光东) apologized to the public and vowed to take measures to rectify the situation. 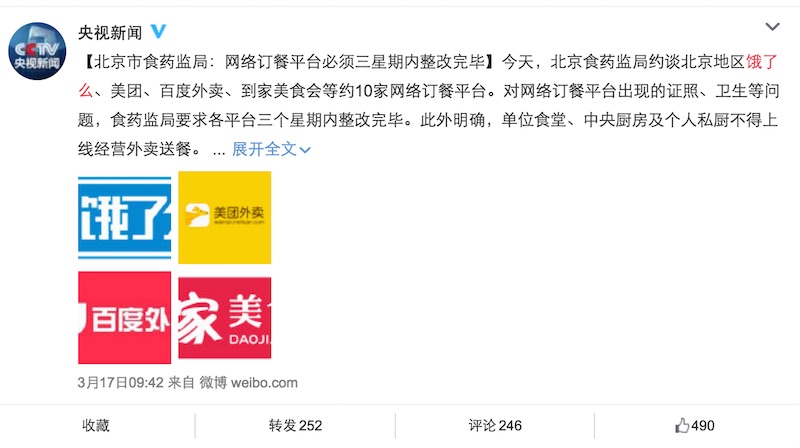 But, as People’s Daily reports, Eleme users point out that vendors who have gone offline on the app are now offering their services under a different name.

This is not the first time apps like Eleme are targeted by Chinese media. In October last year, CCTV also reported that Meituan and Eleme facilitated illegal vendors to do business.

Meanwhile on Weibo, it is not the food quality or safety that worries netizens, but Eleme’s service. As one netizen called Black Mad Devil Tang Official writes:

“Such a lousy app like Eleme shouldn’t be allowed to exist! The delivery guy was already halfway to bring me a salad and still it takes two hours with him calling me every other minute to ask for directions, are your delivery staff crawling their way to my house or what? He’s not only slow, but he first calls me to tell me he’ll be there in half an hour, and then five minutes later he calls me again to tell me it’ll take another 20 minutes, are your delivery guys like ticking time bombs?!”

One commenter said: “Instead of ‘Hungry Now?’ they should change their name to ‘I’m Starving’.”