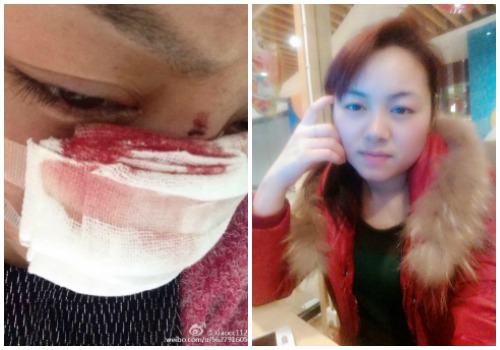 “My name is Li Yun, I am 30 years old, and am a victim of long-term abuse by my husband” – a female victim of domestic abuse has taken her gruesome story online. Her husband has cut off her nose, she says – she now needs money to complete her surgery. Li Yun’s story, that went viral on Weibo, raises public awareness on domestic abuse in China.

The topic ‘Woman suffers domestic violence: nose was cut off’ (#女子遭家暴割鼻#) became trending on Sina Weibo on April 20, when netizens collectively responded to how netizen Li Yun (李云), a citizen from Taizhou in Zhejiang province, told her followers how she has been a victim of severe domestic abuse for years. The woman told her shocking story on her Weibo account on April 19, 2016: 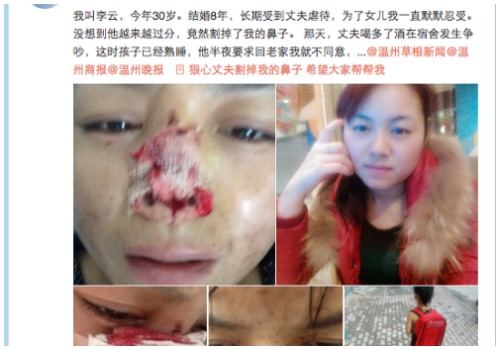 “My name is Lu Yun, and I am 30 years old. I’ve been married for 8 years and have suffered long-term abuse by my husband. I’ve suffered in silence for the sake of my daughter. I would’ve never expected him to get more and more extreme; to the point of him cutting off my nose.

That day, my husband had too much to drink, and we had an argument in the living room. My child was already asleep and he wanted to go to his native village in the middle of the night and I did not agree. I didn’t argue with him as I was lying on the bed sleeping with my back towards him. He took my razor blade and cut my nose. He said my nose was my best-looking feature, so he’d better cut it off. At that time, I had no idea and thought he’d used his fingers to scrape my nose. But later I felt the blood rushing out, and I stood up and asked him how he could do this to me. He grabbed a towel and strapped it around my neck; I could do nothing but try and pull the towel away with my hands when he heartlessly tore my nose down – I could do nothing but cry out. It woke up my child and she came crying. It wasn’t until then that he let go of the towel. Without my child, I probably wouldn’t be here today.”

Li Yun proceeds to explain how she called the emergency number 120 with the last strength she had. Doctors at the hospital could do little to save her nose, so Li later had to see a specialist in Wenzhou. Constructing her (partially artificial) nose would cost over 300,000 RMB (46,000 US$), she was told. Li proceeded with the first surgery, which she could afford with the 60,000 RMB she borrowed from friends. For her second surgery, and to be able to send her daughter to school, she calls on the help of China’s netizens to help her so she can get the surgery she needs to make her nose look normal enough to find a job and take care of her daughter. 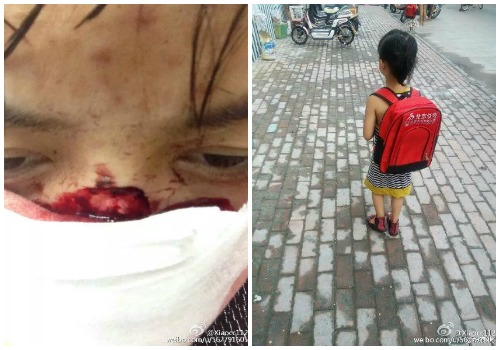 The photos that Li posted of her nose, and her little daughter who, she says, asks her mum daily when she can go to school.

Over 480.000 netizens had read about this story by April 20, responding to it in great numbers and condemning the husband’s “beastly behavior”. Many commented to wish Li Yun a speedy recovery.

Several Chinese media have followed up on the story and spoke to Li Yun. Sina Zhejiang writes that since the attack took place in April of last year, Li can only breathe through her nose.

Some netizens also put Li’s story in a bigger context, linking it to China’s overall problem of domestic abuse: “The punishment for this kind of maltreatment of women is too light,” one netizen says: “The law is hopeless this way – women really have to look out for themselves and be very cautious when getting married.”

China’s first anti-domestic abuse law just came into effect on March 1st of this year. According to state media estimation, one in four married women in China have experienced some form of domestic violence, although the real figure may be much higher, since many women do not report cases of abuse.

Due to the new law, victims of domestic abuse can go to court to seek a restraining order, which could potentially force the abuser out of the home. But, as Asia Times reports, critics say the legislation still doesn’t go far enough.

News outlet China.org reported that local police have placed Li’s husband on their “wanted list” since last June, but that the man still remains at large.

After today’s trending topic, more people will undoubtedly be on the lookout for him. “If they catch him, let them first cut off his nose, too!”, one netizen writes.