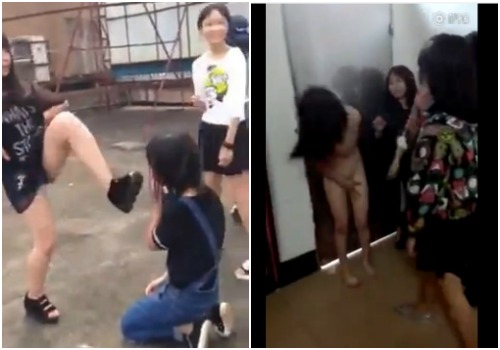 A string of extremely violent videos have recently been posted on Chinese social media, showing multiple bullies beating up their victim on camera. These so-called ‘campus violence videos’ (校园暴力视频) expose the seriousness of China’s bullying problem.

Many netizens become angry when seeing violent school videos popping up on Chinese social media: “Ten girls holding a steel pipe in their hands, participating in an armed confrontation. This scum of the earth should be chopped to death!” – is one comment on March 22, in response to a video where a group of girls are captured on video beating other girls with steel pipes.

It is just one of many examples of violent videos that have surfaced on Chinese social media practically every day over the last year.

According to Baike, China’s equivalent to Wikipedia, ‘Campus Violence’ (校园暴力) refers to any type of violence on schools and the campus, either between students, students and the teacher, or student’s vandalism on the school premises. Campus violence is no longer simply the problem of the school; it has become the focus of public attention, especially now that more and more cases are caught on tape and spread on social media.

Many bullying videos expose how young girls are beating on other girls. One video shared on March 23 shows how two girls are repeatedly hitting one girl in the face. But there are also other types of confrontations. Another video that was shared on March 22 was that of some high school students beating their teacher with a chair in the classroom.

According to one netizen called ‘Happy Warm Brother‘ (happy热哥) who posted the video of the classroom confrontation, the incident occurred at a middle school in Lianping county, Guangdong. 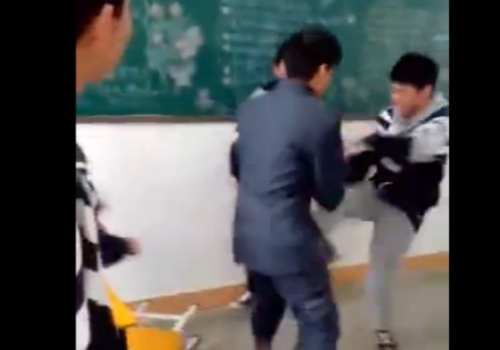 Many commenters react in shock: “These boys should be immediately expelled!” and “Such scum!”. By noon of March 23, the video was shared nearly 1000 times.

‘Weibo Violence’ (#微博曝料#), ‘Campus Violence’ (#校园暴力#) or ‘Exposing Campus Violence’ (#校园暴力曝光台#), have been recurring online topics over the past year. In November 2015, a video of a schoolgirl getting kicked in the stomach surfaced online and caused quite some controversy. Since then, this kind of violence has been a daily topic on Weibo, with one after the other video coming out. Some also include sexual assault, with girls tearing off the clothes of their victim and kicking on a naked girl. 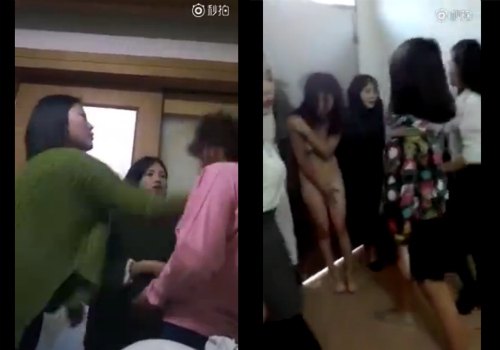 Sina Weibo recently described the phenomenon of bullying videos as follows: “Lately, videos and news of campus violence has appeared online again and again. They are a serious disturbance of school order and a pollution of student’s healthy studying environment. It’s bringing a bad influence to schools and society at large.”

China is dealing with a real epidemic of school violence. As CNN reported earlier, the emergence of these kinds of violence is connected to different factors, including peer pressure, broken families, feelings of insecurity and increased time spent online.

According to the NoBullying movement website, boys and girls act differently when bullying. Girls commonly form girl groups to gang up on their victim to show that they are in control or to gain popularity. They are also more inclined to make cruel jokes and pranks to embarrass or humiliate the victim. This might play a role in the fact that there seem to be more Weibo violence videos of girls bullying on girls than those of boys. 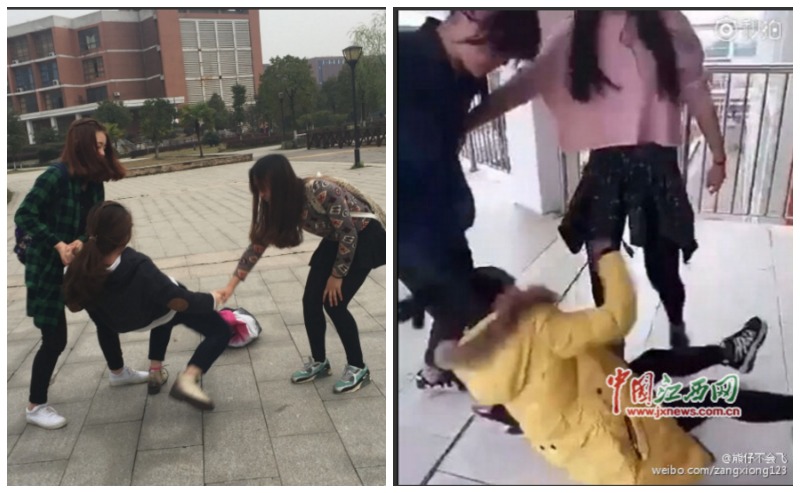 Although the extreme bullying video’s have become a recurring topic of discussion, the online censorship on these kinds of video’s is weak to non-existent – they are freely shared on video platforms Youku or Miaopai and then shared through WeChat or Sina Weibo.

“Not another school violence video!” – a netizen called Zhong Yuejuan (钟学隽) responds when Weibo user Zhou Licheng (周李城), who focuses on school violence, posts another shocking violent video: “There’s another one every day, when will we come up with a way to deal with campus violence?”

Chinese netizens have started using the hashtag ‘Urgent action to implement laws’ (#迫切呼吁立法#) to address the problem of bullying in schools.

The anti-bullying shout outs of social media users have not gone unheard, as the prevention and punishment of this kind of violence has increasingly become a topic of focus for Chinese government and state media.

Part of the reason why bullying is such a big issue in China is that the perpetrators barely face legal consequences, and that the problem culturally is not seen as a serious one. As China Daily writes about bullying: “Few offenders receive proper punishment in China. In most of the cases that do not involve severe physical harm, the only “punishment” offenders receive is criticism from schools. As for parents, most of them consider bullying incidents as “small fights” between their children, and it is precisely because of such an attitude that bullying cases have not declined in China.”

In the Chongqing Evening News, Shi pleads for a better use of existing Chinese laws. Although children under 14 years of age cannot receive criminal penalties in China, minors from 14 to 16 years of age can be punished for theft, assault and manslaughter. From 16 years on, they can be punished like adults. According to the law, Shi pleads, there are ample possibilities to punish bullies for their violent deeds. Besides punishment, there should also more focus on the prevention of these kinds of violent acts.

Chinese politician and Minister of Education Yuan Guiren recently made a statement about China’s school violence problem, saying that the laws will be adjusted so that bullies will be able to get stricter punishments. 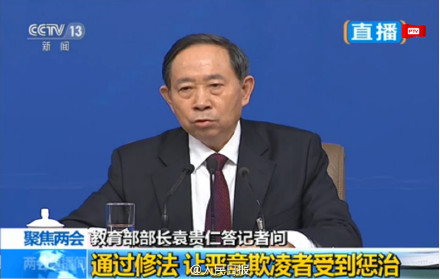 “They should’ve done this earlier,” one Weibo user responds: “The law should protect those children who need it the most.”

On this page we have listed some bullying videos that are written about in this article. They contain graphic content, that may be disturbing to some viewers.

Fight Between Officers and Street Vendor Caught on Video: Bystanders Yell “Hit Them!”