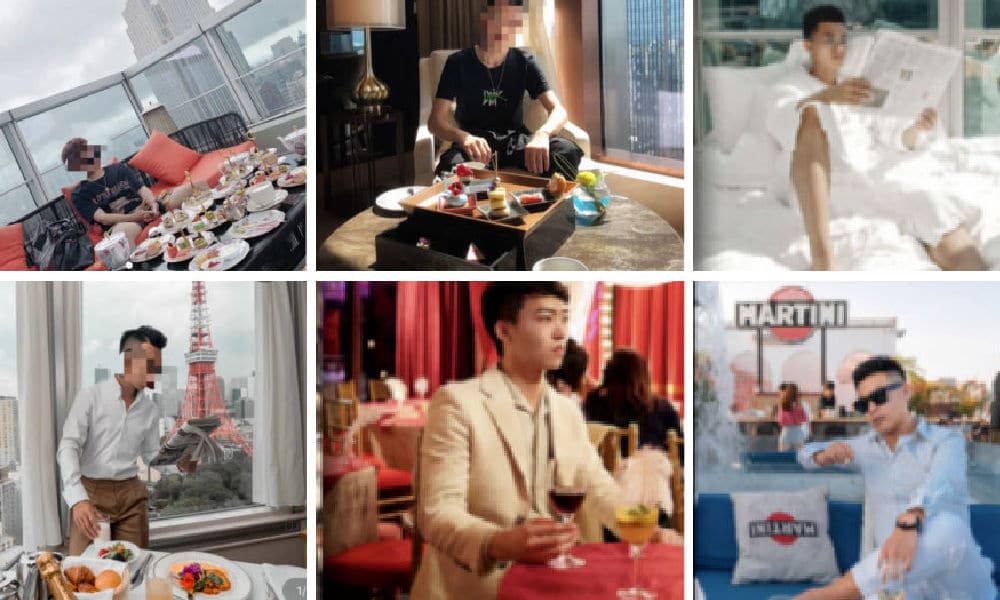 Some are so eager to look picture perfect on their social media feed, that they go to extremes to create a fake online life.

This topic, and more, was trending on Chinese social media this week.

Listen to our second What’s on Weibo podcast here! (Or subscribe via Spotify/Apple/Google!)

Want to catch up on our first episode? Check here.

China’s Association of Performing Arts has issued a blacklist, but Li Xuezheng questions their legal authority to do so. 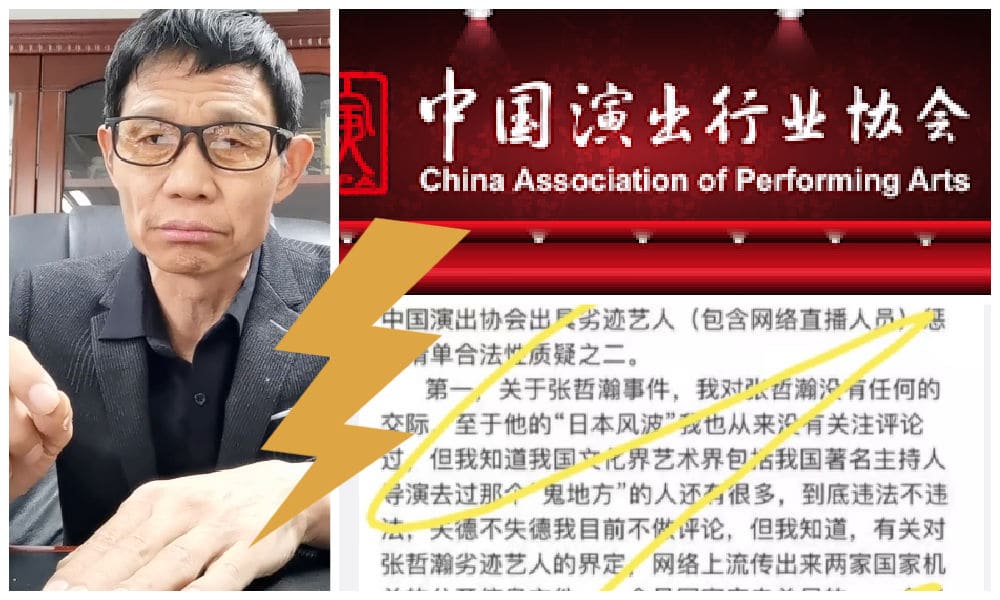 As an important voice within the industry, Li Xuezheng has spoken out against the recent blacklist of Chinese (online) performers issued by the China Association of Performing Arts. Li is willing to help one of the prominent names on the list, Chinese actor Zhang Zhehan, to file a lawsuit against the Association.

Li Xuezheng (李学政), Vice Chairman of the China TV Artists Association and Director of the Golden Shield Television Center, has published a video that has caught the attention of many on Weibo. In his video, Li questions the authority of China’s Association of Performing Arts (CAPA/中国演出行业协会), which released a black list of online celebrities earlier this week.

The list went trending on Weibo and contains 88 names of internet personalities who have been reported and registered for their supposedly bad behavior. The people on the list have either violated the law or their actions have allegedly negatively impacted society and public order (more about the list here).

The consequences for the people included in the list are potentially huge, since it not only bans livestreamers from continuing their work but also prohibits performers who were previously ‘canceled’ from entering China’s livestreaming industry to generate an income there. Through the list, CAPA gives an overview of people that should be boycotted and disciplined in the industry.

One of the people on the list is Zhang Zhehan, an actor who got caught up in a Chinese social media storm in August of 2021 over attending a wedding at a controversial Japanese shrine and taking pictures at Yasukuni, a shrine that is seen as representing Japanese militarism and aggression. 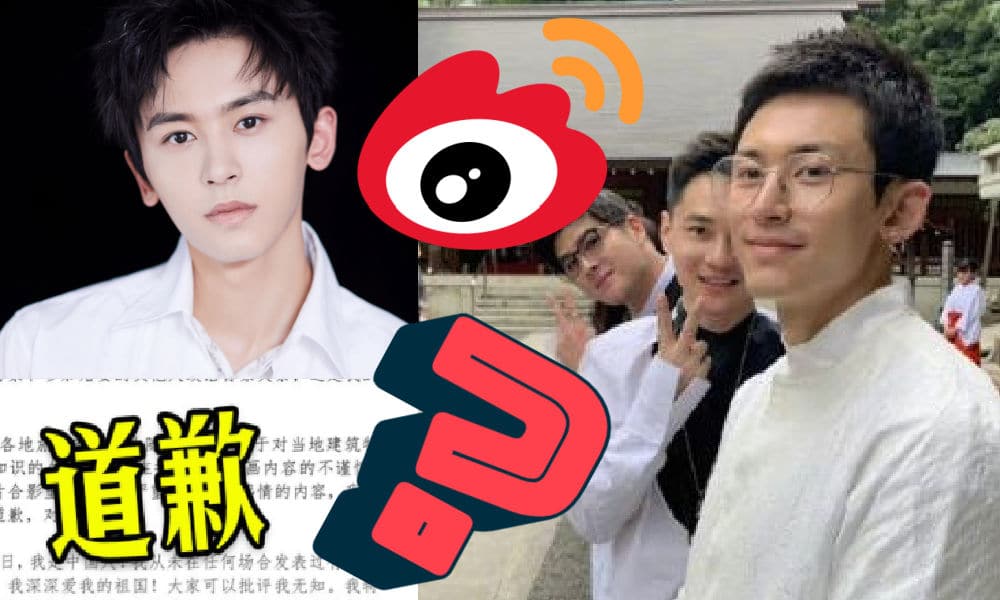 Zhang Zhehan got into trouble for posting photos of himself at Japanese shrines deemed historically controversial.

Although Zhang apologized, Zhang’s account and an affiliated work account were suspended by Weibo and the brand partnerships he was involved in were canceled.

Chinese celebrities who have fallen out of favor with authorities or audiences will sometimes turn to livestreaming. Singer Li Daimo (李代沫), for example, became a livestreamer after his successful singing career ended due to a drugs scandal. But now, even such an alternative career would no longer be possible for someone like Zhang, although he was never legally convicted for anything.

News of CAPA’s blacklist was widely published, also by People’s Daily, and the measures were presented as a way to tidy up the chaotic online entertainment industry and to create a “healthy and positive” internet environment.

In his video and other recent posts, Li Xuezheng wonders how the so-called ‘warning list’ was compiled, according to which criteria, by whom it was created, and whether or not the CAPA actually has the legal power to shut people out of China’s live streaming industry.

He also raises the issue that CAPA’s live streaming branch, that issued the blacklist, is actually a business entity; so how does it have the legal disciplinary powers to impose sanctions against Chinese online influencers and performers? 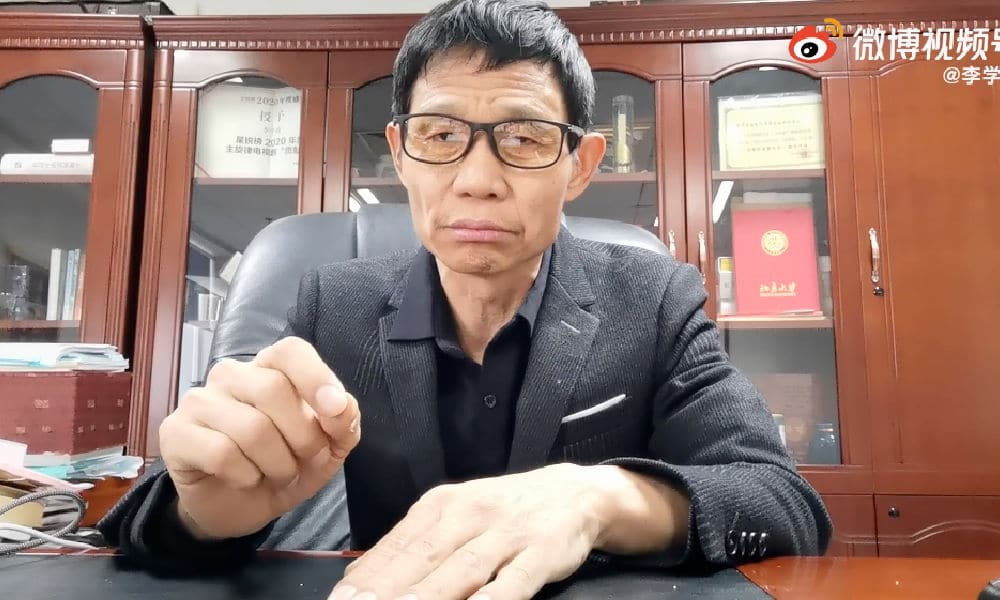 Li Xuezheng in his video.

Li’s video, posted on his Weibo account on November 24, has received over 90,000 likes and was shared over 8500 times at the time of writing.

The China Association of Performing Arts, founded in 1988, is a national-level organization that falls under the supervision of the Ministry of Culture and Tourism of China. It is a non-profit organization formed by performance operators and performers, according to its official website, which also states that members of the association include performance groups, performance venues and companies, ticketing companies, and more.

Since Li’s video was posted on November 24th, he received a lot of support from Chinese netizens but also faced some online censorship. Li himself posted screenshots showing that not all of his posts could be published.

It is noteworthy for someone like Li to speak out against CAPA’s blacklist. Li Xuezheng is a familiar face within the industry. Born in Shandong Province in 1965, Li has worked in China’s film and TV industry for a long time and has since built an impressive resume as a producer, supervisor, actor, and distributor. He has over a million followers on his Weibo account (@李学政).

On November 25th, Li added another post to his series of posts on the CAPA issue, saying that although his initial goal was just to make sure that CAPA sticks to the rules, he is now also prepared to help Zhang Zhehan in filing a lawsuit against the Association, since Zhang did not violate any laws in order for him to be ‘canceled’ like this. “I believe in the justice of the law,” Li writes. 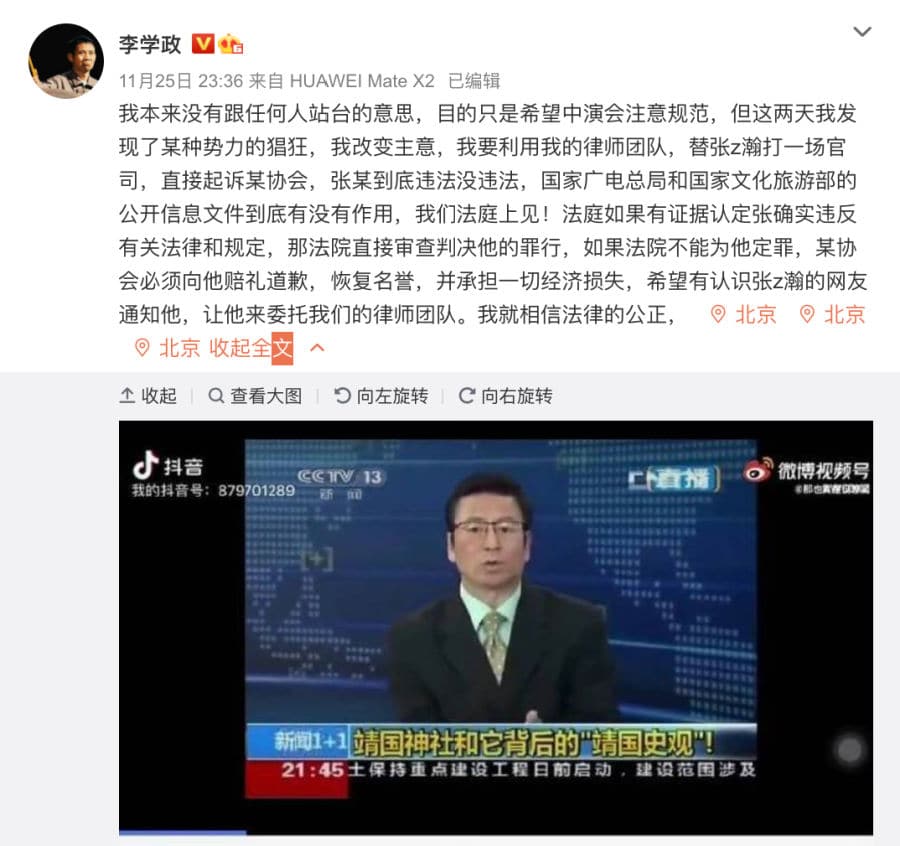 Although Li received a lot of support on social media, there are also those who worry about Li himself: “You first take care of yourself,” some say, with others warning him: “Teacher Li, if you go on like this, you will lose your [Weibo] account tomorrow.”

Others are moved by Li’s courage: “I almost feel like crying reading your words.”

“It’s been a long time since I’ve seen someone with this kind of overwhelming righteousness.”

For now, Li seems to be unstoppable in his goal to get to the bottom of this case; he seems to be determined to raise awareness within the industry on who is legally allowed to set the rules and who is not.

One popular comment says: “Looking at Teacher Li, I see he is fighting corruption and advocating honesty. Besides listening to the public’s opinion, I just hope law-based society will rule according to law.”

China’s canceled celebrities won’t be able to turn to live streaming once they’re on this black list. 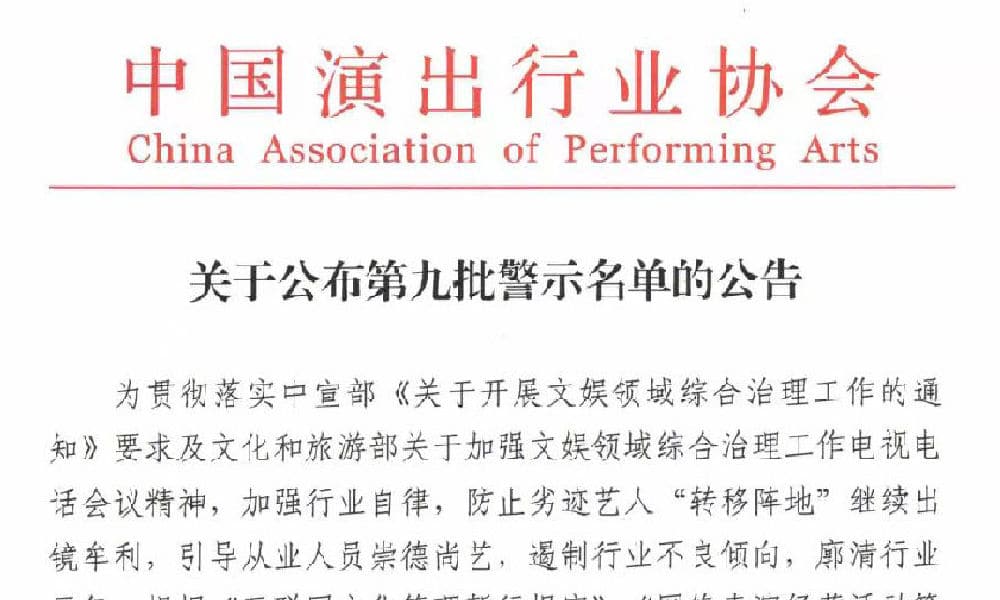 On November 23rd, the China Association of Performing Arts issued a so-called “warning list” of 88 names of internet personalities who have been reported and registered for their bad behavior. The people on the list have either violated the law or their actions have allegedly negatively impacted society and public order.

The moral responsibility of Chinese idols became a much-discussed topic earlier this year when various celebrities came under fire for sexual misconduct, tax evasion, or other controversies.

Chinese celebrities Wu Yifan (吴亦凡, aka Kris Wu), Zheng Shuang (郑爽), and Zhang Zhehan (张哲瀚) are also on the current version of the list. They previously made headlines in China; Chinese-Canadian pop star Wu Yifan was detained over rape allegations, actress Zheng Shuang was caught up in a surrogacy scandal and was fined $46 million for tax evasion, and actor Zhang Zhehan caused controversy over photos of him posing at historically sensitive places in Japan. 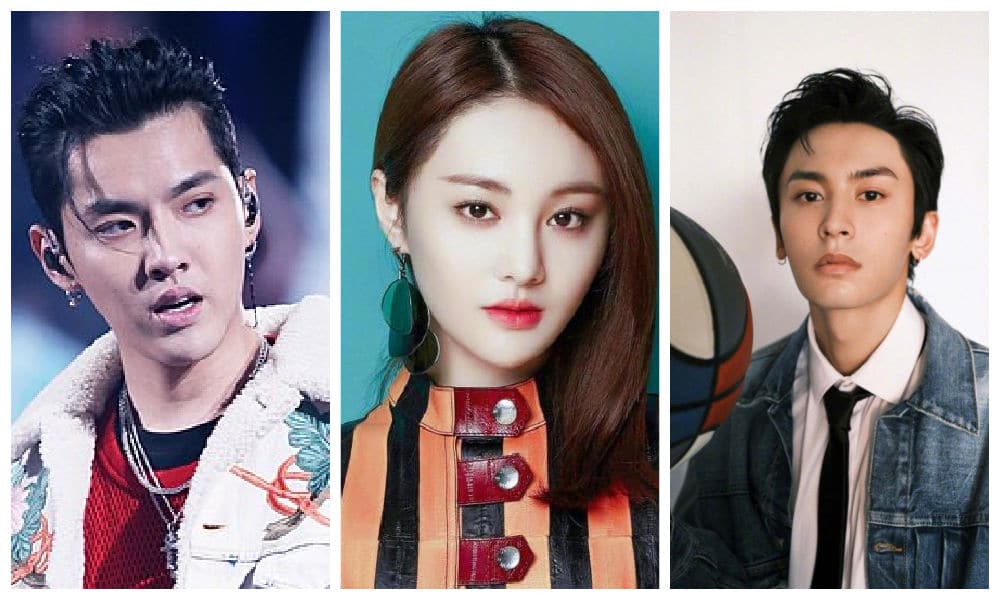 This is the ninth list issued by the live streaming branch of the China Association of Performing Arts, which first started its “blacklist management system” (“黑名单”管理制度) in February of 2018.

According to an interview by People’s Daily with a spokesperson of the association, they further revised the management system in 2020 and then formed the so-called “Management Measures for the Warning and Return of Online Hosts” (网络主播警示与复出管理办法).

This year, Chinese (online) entertainers have faced tighter scrutiny since China’s Propaganda Department and other authorities have placed more importance on their societal influence as role models.

Although the list issued by the Association’s livestreaming branch focuses on online presenters and bloggers, it also includes other performers who already had a bad record. Chinese celebrities who have faced controversy will sometimes switch from acting or singing to the live streaming industry in order to generate an income. The new measures make it more difficult for ‘canceled celebrities‘ to make a comeback as a live streamer.

This also means we won’t be seeing Zhang Zhehan, Kris Wu, or Zheng Shuang on live streaming channels any time soon, as their inclusion on the list has basically banned them from the industry.

The China Association of Performing Arts issued this blacklist with 88 names of Chinese online celebrities, among them are also Kris Wu, Zheng Shuang, and Zhang Zhehan, whose return to the entertainment circles has now become highly unlikely: https://t.co/jhz6ajiglk pic.twitter.com/mB9ABG95D1

Since 2018, a total of 446 online celebrities/streamers have been put on one of these blacklists.

The topic became top-trending on Sina Weibo on Tuesday, where one hashtag page about the list received over 180 million views, and another one – specifically referring to Wu, Zheng, and Zhang being shut out from the industry – receiving over 630 million clicks (#吴亦凡郑爽张哲瀚被封禁#).

Many commenters wondered about why some names weren’t on the list, such as Chen Lingtao (@Cloud_陈令韬), who recently came under fire for cheating. “Of all the 88 people on the list, there are 85 I don’t know,” one commenter said.

Besides the three biggest celebrities, there are also names on the current list such as Tik Tok (Douyin) celebrity Tie Shankao (铁山靠) or online streamer ‘Teacher Guo’ (郭老师). Guo was popular on Tik Tok (Douyin) for rejecting standard beauty norms. 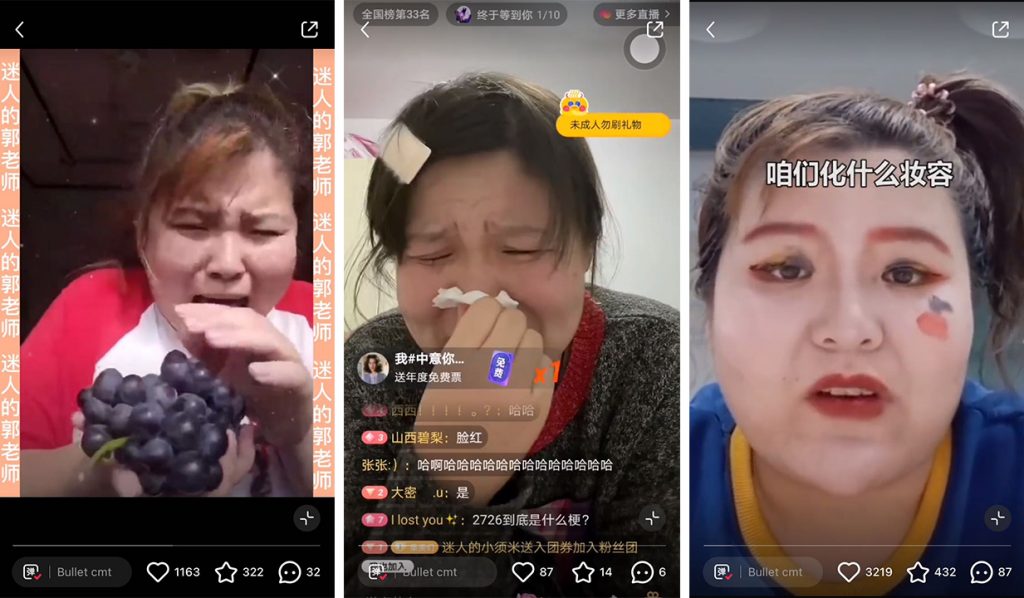 Guo was removed from Chinese social media in September of this year during the major crackdown on Chinese celebrity circles. Now that she is included on the list together with 87 others, her return to the livestreaming industry is very unlikely.