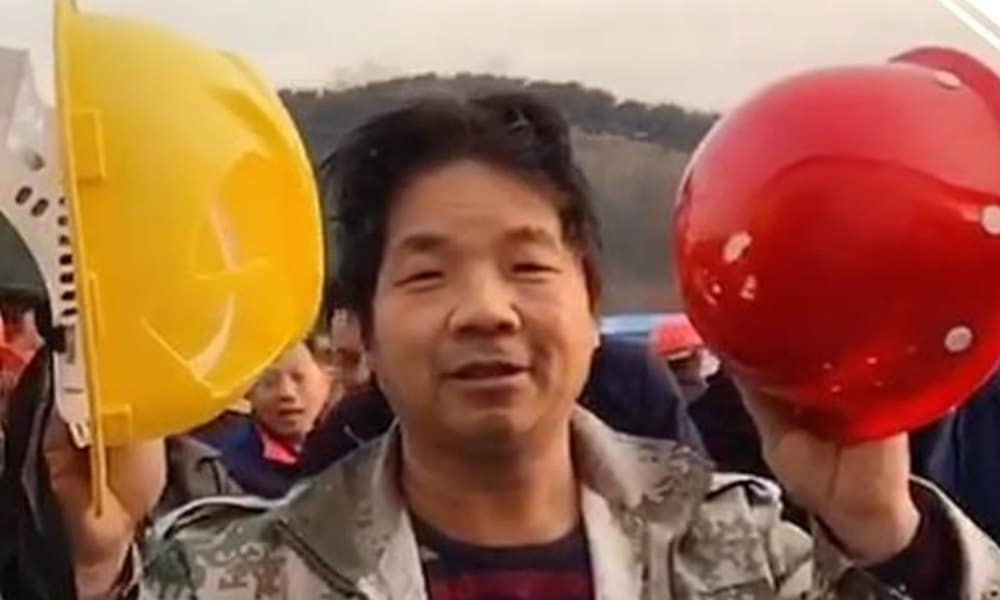 A video of a Chinese construction worker showing the shocking difference in quality between the safety helmets of laborers versus those of their supervisors went viral on social media earlier this month. Chinese netizens praised the whistleblowers’ push for equal safety standards, but he is now left jobless and ignored.

On April 11, a Chinese day laborer by the name of Dou (窦) published a video on Kuaishou exposing the low-quality safety helmets for frontline construction workers.

In the video (embedded below), Dou shows two helmets. The yellow one, he claims, is the one worn by construction workers. The red one belongs to their supervisors. As he smashes the helmets together, Dou shows how the yellow one is immediately crushed, while the red one remains in perfect condition.

Dou’s message was simple and strong: the helmets worn by supervisors are of much higher quality than those of construction workers, exposing them to considerable dangers while working.

The video was viewed at least 100 million times and sparked major online discussions on the safety of Chinese construction workers before it was taken down from video platform Kuaishou on April 18.

At time of writing, the hashtag “The Contrast between the Safety Helmets of Workers and Supervisors” (#工人和领导安全帽对比#) has been viewed 250 million times on social media platform Weibo, where netizens have collectively expressed their sympathies for vulnerable laborers whose “safety first”, apparently, is not a priority at many construction sites.

The topic also made headlines in Chinese state media. State-owned broadcaster CCTV investigated the quality of Chinese safety helmets, and discovered that some available construction hats, priced as low as 4 RMB (0.59 U.S.$), did not meet safety standards.

A lawyer quoted by Global Times advocated that China’s relevant government departments should launch a campaign to crack down on “inferior helmets” and “clean up illegal products from the source.” The state-run newspaper also reported that workers wearing unsuitable helmets was “a norm in the construction industry,” according to an industry insider.

China’s Ministry of Emergency Management (中华人民共和国应急管理部) released a public statement on Weibo in response to the issue, reminding construction supervisors to abide by legal safety regulations.

But despite the overwhelming support for Dou, the day laborer is now left jobless and worried. In an interview with Chinese media outlet The Paper, Dou says that he can no longer find work since his video has gone viral: “I used to be able to find work every day,” he said: “Why can’t I find it now?”

In the interview, Dou suggests that his online fame over unequal safety helmet standards has made contractors afraid to hire him: “Even contractors that I used to work for are all declining my services.” The situation has left Dou, father to three children, in financial troubles that have forced him to return to his hometown.

When reporters asked Dou why his viral video and earlier videos exposing the flimsy quality of construction hats were taken offline, he reportedly answered: “I need to live.” Perhaps hoping to prevent further exclusion from the construction job market, Dou also claimed he had purchased the helmets in the video himself, and that his employer was not to blame.

“In the first few years of our lives we learn how to speak, and then we spend the rest of our lives learning to stay quiet.”

News of Dou’s predicament has attracted the attention of netizens. Earlier this week, the hashtag “Flimsy Safety Helmet Man Responds” (#脆皮安全帽当事人回应#) received more than 180 million views on Weibo, with many commenters expressing their worries over Dou’s situation after addressing serious workplace safety issues.

One Weibo commenter wrote: “If this [unemployment] is the price you pay for speaking the truth, then who is willing to do so in the future?!” Another Weibo user wrote: “If you have nothing to hide, you’d have no problem hiring him.”

“In the first few years of our lives we learn how to speak, and then we spend the rest of our lives learning to stay quiet,” another commenter wrote.

Despite the public outcry against the injustice suffered by Dou, there are also those who point out that social media discussions can have an actual impact.

Some netizens referred to another incident that occurred last weekend when a video of a woman sitting on the hood of a brand-new Mercedes-Benz went viral. 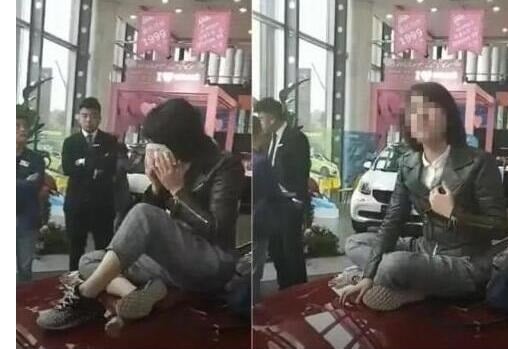 The woman had just purchased the Mercedes, and as the car was still standing in the showroom, it was leaking oil. After the dealer told her that she had to pay for the repairs, she climbed on the hood of the vehicle and, in tears, refused to get down.

A video of her protest immediately went viral, and millions from all over the country expressed their support for the woman. In light of the public controversy, Mercedes launched an investigation and suspended the showroom for violating regulations.

On Weibo, many people take the Mercedes incident as an example of how justice can prevail as long as netizens unite. But whether the power of social media will also have a positive outcome for Dou is yet uncertain. “He probably won’t be able to find any work for the time to come,” some Weibo users predict.

UPDATE 25 APRIL: Shortly after publishing this article, the hashtag “Flimsy Safety Helmet Man Finds Work” (#脆皮安全帽当事人已找到工作#) has taken off on social media platform Weibo. Dou has received the help of a friend in finding work at a local construction site in Qingdao, the same city where he previously worked.

“Why Aren’t You Getting Married?” – China’s Marriage Rates Keep Dropping