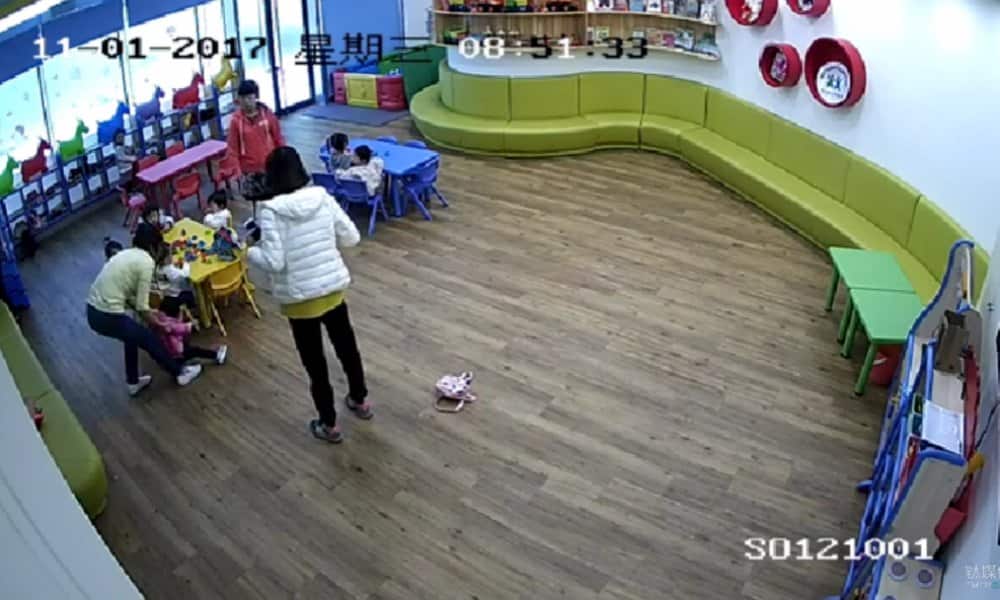 Footage of toddlers being abused at the daycare center of China’s Ctrip company is widely circulating on Weibo, triggering anger amongst Shanghai parents and Chinese netizens.

Surveillance footage of the abuse of toddlers at a company’s in-house kindergarten has surfaced on Chinese social media, leaving Shanghai parents and Weibo netizens shocked and outraged.

The abuse occurred at the Shanghai daycare facilities of Chinese travel giant Ctrip.

The footage, captured by surveillance cameras on November 1-3, shows how a female staff member forcefully takes off the backpack of a little girl and throws it away, after which she pushes the toddler to the ground. 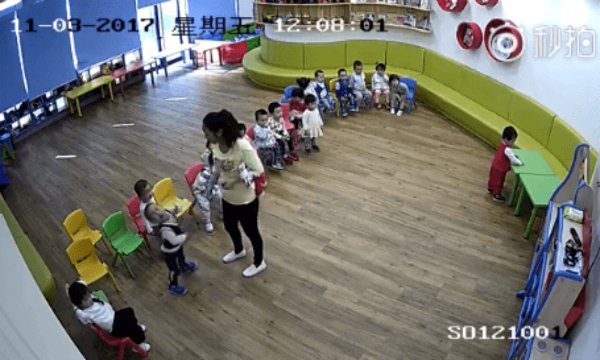 Other fragments show how a staff member puts something – which was later confirmed to be wasabi – in the mouths of several toddlers, leaving them gasping and crying.

A video of the incidents shared by Beijing News on Sina Weibo was shared almost 15.000 times on Wednesday, triggering some 20.000 comments. The topic #Ctrip Kindergarten# was viewed more than 26 million times.

News site Sina reports that the Ctrips’s HR department received reports about alleged abuse from concerned staff at the daycare on November 3. The abuse was exposed on November 6 when surveillance footage was inspected by company staff.

News of the abuse then quickly spread to parent support groups. Sohu writes that Weibo netizen @PrettySoldierHelloKitty (@美少女战士helloKitty) first exposed the videos online, after which they soon became trending.

The daycare is home to five groups of around 20 children each. Their parents are all employees of Ctrip.

Sixth Tone reported that the staff involved have since been fired and that the police is currently investigating the issue.

On November 8, Ctrip organized an ‘apology meeting’ where the kindergarten’s staff members in question, kneeling to the ground, faced the outraged parents. Footage of this meeting also widely circulated online afterwards, showing parents crying and screaming. 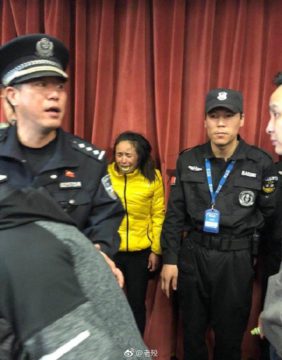 During the ‘apology meeting’, parents shoved wasabi into the mouth of one of the involved teachers [pictured].

Security staff was present to prevent the emotional parents from attacking the kindergarten’s staff members. Before being held back, some parents forced wasabi into the mouth of one of the involved kindergarten teachers. 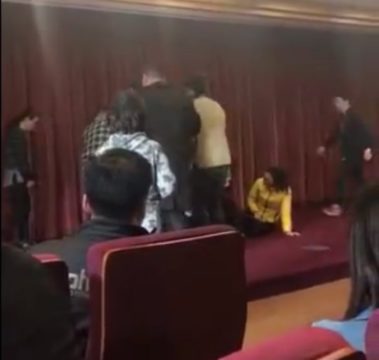 Parents tried to attack the staff members, and were held back by security.

Other various screenshots of WeChat conversations with the kindergarten’s employees show that parents already had concerns before the abuse was exposed, asking staff about bruises on their child and if something had occurred at the daycare. 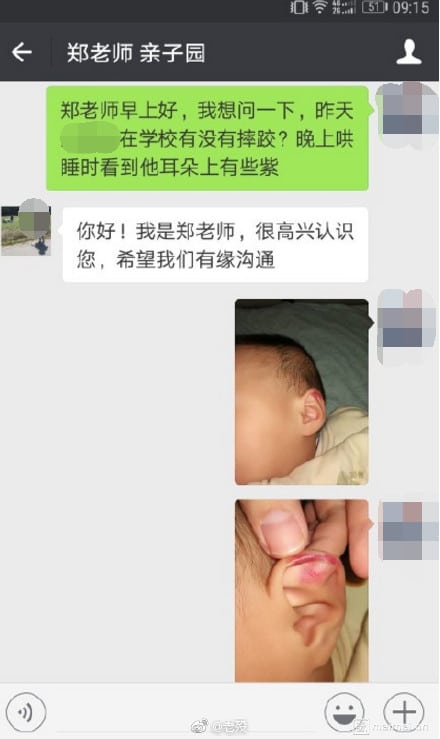 Parents previously asked staff about the bruises on their child, but employees denied their role in the matter.

“I usually look through Weibo before sleeping, but after seeing this, I can no longer sleep,” one female netizen writes: “I am so angry I wish I could go out and scold these people.”

“This makes me worry for the safety of my own daughter at school,” another person wrote.

Abuse of children by teachers often makes headlines in China. In August, an essay by a primary school student that exposed daily abuse by a schoolteacher also went viral on Weibo.

A widespread survey across ten provinces in China among elementary and junior secondary school students showed that 15.4% of young students suffered corporal punishment as a form of discipline at school.

But stories of abuse amongst the very young children, as in the Ctrip case, also frequently surface. In 2012, another story in which a Guangzhou female teacher beat a 4-year-old girl made headlines. In 2016, another abuse case in Hebei also sparked outrage.

Many netizens hold the Ctrip company responsible for the incident: “I am furious! I will immediately delete the Ctrip app from my phone,” many commenters said.

Ctrip has apologized and promised to “offer physical examinations and psychological counseling to children in the day-care center and parents , in an effort to minimize the impact of the incident,” Global Times reports.

State media write that the problem of abuse in Chinese (pre)schools relates to a lack of professional kindergarten teachers and the widespread employment of unqualified kindergartens.

On Trump’s First Day in China, Arabella Steals the Show