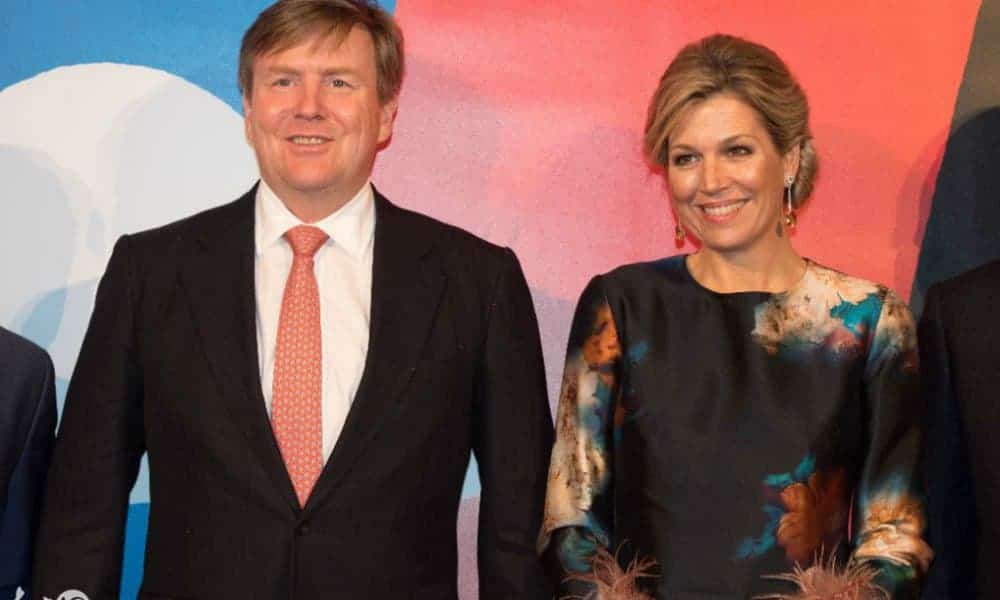 The Dutch King Willem-Alexander and Queen Maxima arrived in China on Wednesday for their third meeting with Xi Jinping and the First Lady since 2014.

For a third time in less than five years time, the Dutch King and Queen are meeting with Chinese president Xi Jinping and First Lady Peng Liyuan. After official mutual state visits in 2014 (Netherlands) and in 2015 (China), the royal couple arrived at Beijing airport on Wednesday morning for a personal meeting with the President and his wife.

Besides a meeting with Xi, Dutch King Willem Alexander and Queen Maxima will also meet the Chinese premier Li Keqiang. Dutch newspaper De Telegraaf reports that the royals and Xi will dine on a location near the Forbidden City on Wednesday night.

In a Chinese news article about the visit on Wednesday afternoon, Xinhua described the Dutch king as an “old friend” to China in its headline.

Chinese long-standing newspaper Guangming Online took the occasion of the visit to publish a long article featuring a biography of King Willem-Alexander. 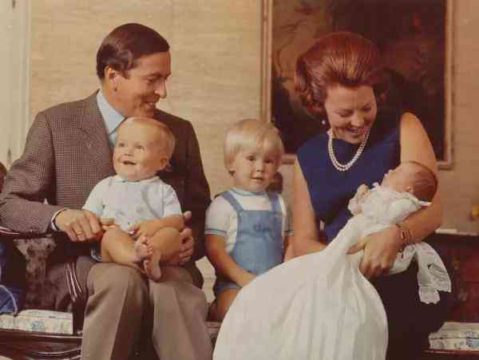 Guangming Online published a biography of the King, featuring childhood photos with his parents. This photo features Prince Claus en Princess Beatrix with their sons Friso, Willem-Alexander and Constantijn, 1969.

Chinese state media outlet Xinhua states that the visit is expected to “enhance mutual trust and understanding in such fields as green finance and bilateral trade” and that it will “inject new impetus into the development of bilateral relations while elevating China-Netherlands cooperation in various fields.”

Xinhua also emphasizes that after the recent China visits of French President Emmanuel Macron and British Prime Minister Theresa May, the visit is a major indication that European countries want closer and more practical ties with China.

Although further details of the meeting have not been revealed, Dutch media do report that the Dutch Minister of Foreign Affairs Halbe Zijlstra, who also joined the royals, will speak to human-rights advocates in China during the visit.

While the 2015 visit of the King and Queen to China received ample attention on Chinese social media, this year’s visit, which is also less formal, has not attracted much comments on social media yet.

This time, the visit is short; Willem-Alexander will depart China on Thursday to join the Olympics in South-Korea. Maxima will join him a day later; she will first visit meet with Dutch entrepreneurs in China.

After More Than a Decade, the Human Flesh Search Engine Is Still Raging Across Chinese Social Media

“The Old Witch has landed!”, many commenters wrote on Weibo when Pelosi arrived in Taiwan. 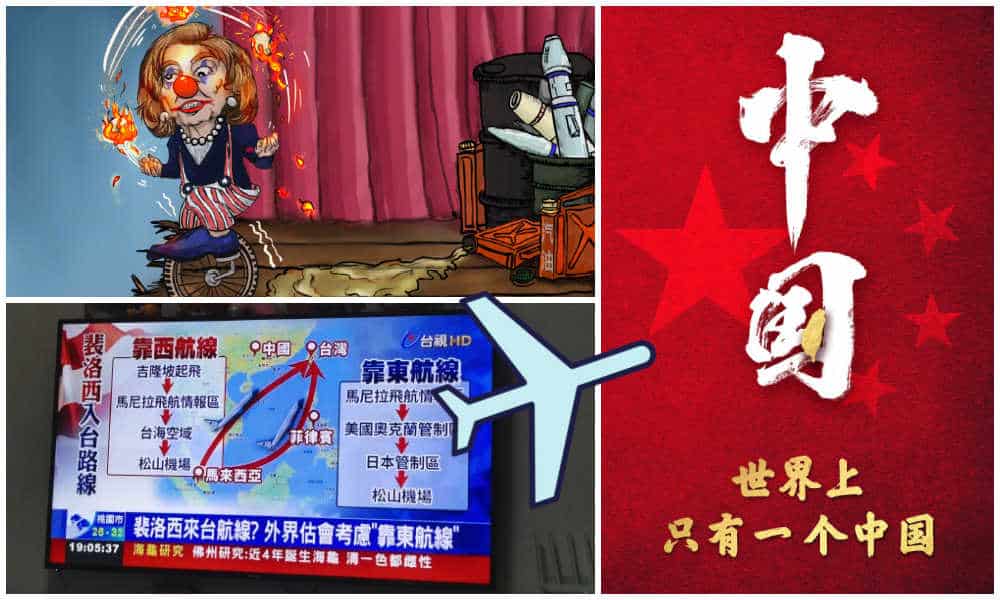 August 2nd was a tumultuous day on Chinese social media, with millions of netizens closely following how Pelosi’s plane landed in Taiwan. Chinese state media propagate the message that not only Chinese authorities condemn the move, but that the Chinese people denounce it just as much.

Pelosi’s visit to Taiwan is all the talk on Weibo, where netizens are closely following the latest developments and what they might mean for the near future of Taiwan and Sino-American relations.

“Today is a sensitive time, as it is said that Pelosi will fly into Taiwan tonight, challenging the one-China principle,” Global Times political commentator Hu Xijin wrote on Weibo on Tuesday afternoon, while Pelosi’s plane was still en route:

“At this time I’d like to tell everyone, that I firmly believe the Chinese government will definitely take a series of countermeasures, which include military actions. The Ministry of National Defense and the Ministry of National Defense have repeatedly said they are “on the alert and combat-ready” and will not “sit and watch.” This is the country’s prestige, how could they not hit back? So let’s wait and see what will happen next.”

Tuesday was an extremely tumultuous day on Chinese social media as Taiwan- and Pelosi-related hashtags popped up one after the other, and news and videos kept flooding the platform, sometimes leading to a temporary overload of Weibo’s servers.

Around 20.30, an hour before Pelosi was expected to land in Taiwan at that time, more than half of all the trending search topics on Weibo related to Pelosi and Taiwan as virtually everyone was following the plane’s route and when it would land.

Not long before the expected landing of Pelosi’s plane, footage circulated on Weibo showing the iconic Taipei 101 building with a display of greetings to Pelosi, welcoming her to Taiwan and thanking her for her support.

This video of this building in Taiwan projecting messages welcoming Pelosi and thanking her for support is circulating online right now (they say it's Taipei 101 but not sure if it really is). pic.twitter.com/Vid02Orkp1

By Tuesday night, Chinese official channels promoted the hashtags “The United States Plays With Fire & Will Burn Itself by Taiwan Involvement Provocation” (#美台勾连挑衅玩火必自焚#) along with the hashtag “1.4 Billion People Do Not Agree with Interference in China’s Sovereignty Issues” (​​#干涉中国主权问题14亿人不答应#). 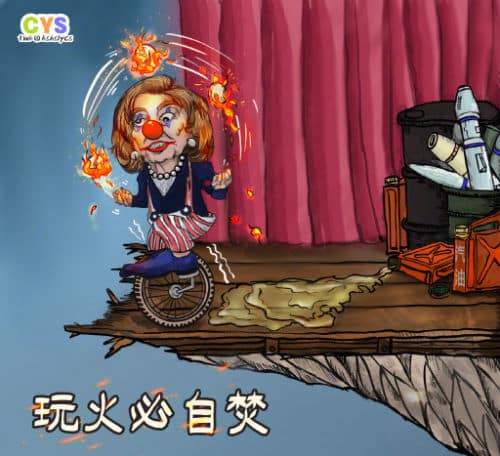 Millions of Chinese netizens followed flight radar livestreams, with one livestream by China.org receiving over 70 million viewers at one point.

On Tuesday night at 22:44 local time, after taking a detour, Pelosi’s plane finally landed in Taipei. About eight minutes later, Nancy Pelosi, wearing a pink suit, stepped out of the plane together with her delegation. 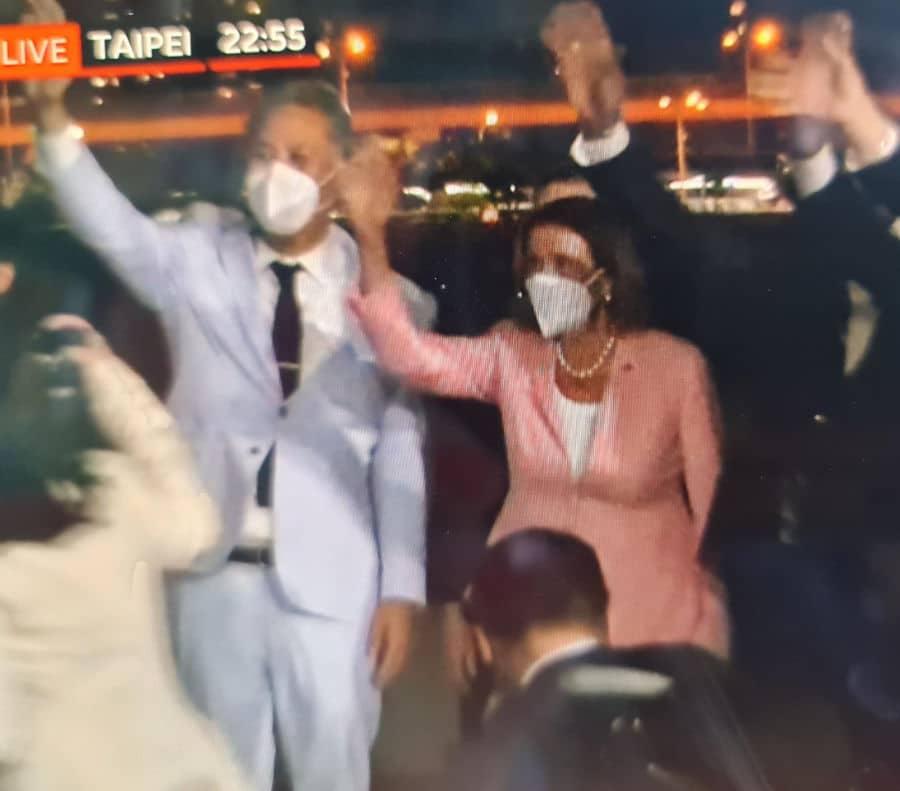 “The Old Witch has landed!”, many commenters wrote on Weibo, where Nancy Pelosi has been nicknamed ‘Old Witch’ recently.

Not long after, Hu Xijin posted on both on Twitter (in English) and on Weibo (in Chinese), writing that Pelosi’s landing in Taiwan opened an “era of high-intensity competition between China and US over Taiwan Strait.” Hu wrote that the PLA is announcing a series of actions, including military drill operations and live-fire exercises in zones surrounding Taiwan from August 4 to 7. 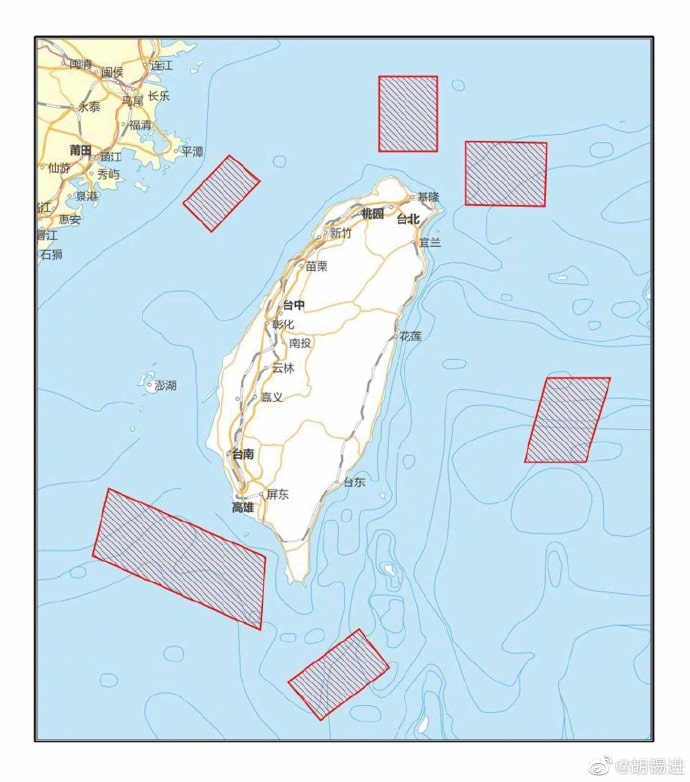 Foreign Ministry spokesperson Hua Chunying (华春莹) also posted a series of tweets condemning the “wrong and dangerous path” the U.S. is allegedly heading down, reiterating the same ‘1.4 billion people do not agree’ narrative that was previously propagated on Weibo by official channels: “Making themselves an enemy of the 1.4 billion Chinese people will not end up well. Acting like a bully in front of the whole world will only make everyone see that the US is the biggest danger to world peace.”

Many netizens expressed frustrations over how seemingly easy it was for Pelosi to land in Taiwan despite repeated warnings. “It’s not like I want us to go to war,” one person wrote on Weibo: “But they are getting off too easy. For days we shouted about countermeasures, what kind of countermeasure is this?”

The majority of commenters do express their dissatisfaction and anger about Pelosi coming to Taiwan, some even writing: “I hope that Taiwan is liberated when I wake up” or “We must unify again, once the Old Witch is gone, we can do so.”

Passed midnight the hashtag “There Is But One China” (#只有一个中国#), initiated by CCTV, picked up on Weibo and received over 320 million views. The post by CCTV that only said “there is but one China” was forwarded on Weibo over 1,3 million times.

“I don’t think I can sleep tonight,” some wrote.

Meanwhile, on FreeWeibo, a website monitoring censored posts on Chinese social media platform Weibo, there are some posts casting another light on the Taiwan issue.

“Regarding ‘Taiwan is China’s Taiwan.’ Every person can vote, there’s multi-party rule, and there can be democratic elections. Only then can we talk about a reunification,” one comment said. It was censored shortly after.

For our other articles relating to Pelosi and her Taiwan visit, click here.

Sina Taiwan is longer available and has suddenly suspended its operations in Taiwan. 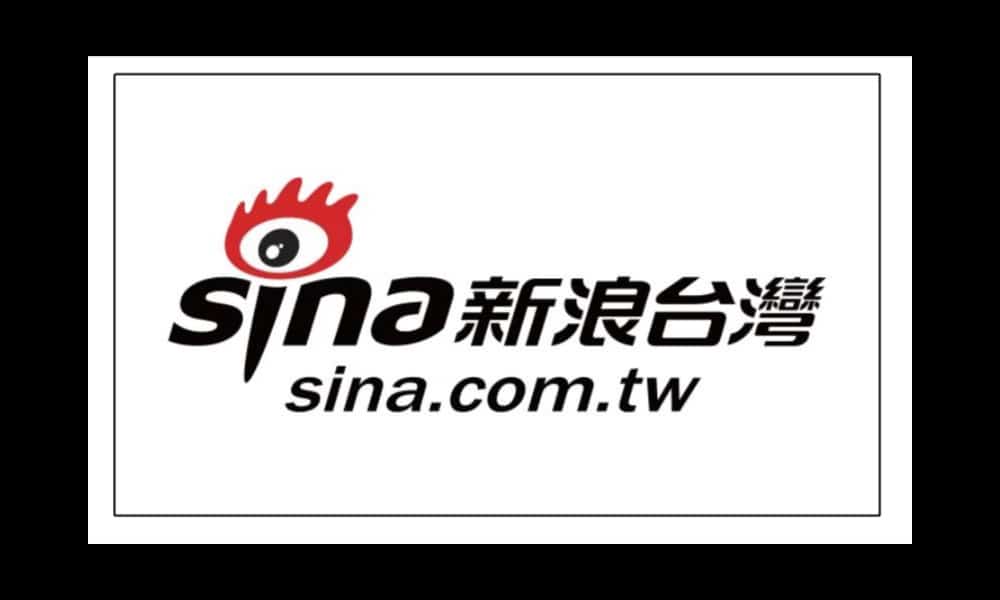 On August 2nd, Taiwanese media sources reported that the online Sina Taiwan platform was longer available and had suddenly suspended its operations in Taiwan without prior notification.

Sina (新浪) is the company that also owns (Sina) Weibo. Founded in 1998, it is a leading Chinese Internet company and media platform that operates various localized websites, including Sina Taiwan (sina.com.tw) which was established in November 1998.

Multiple sources, including Taiwanese news site ETToday , reported news of the closure of Sina Taiwan today. According to ETToday, Sina Taiwan’s parent company confirmed the company has suspended its services in the Taiwan market and ceased operations on August 1st due to the company’s “operational strategy.”

Weibo also set up a localized version in traditional characters for the Taiwan market. Earlier today, the Weibo Taiwan site (tw.weibo.com) also seemed to be inaccessible for a while but was accessible again at the time of writing.

News of Sina Taiwan’s abrupt closure comes at a time of heightened tensions over Taiwan between China and the U.S. in light of reports of a potential Taiwan visit by U.S. House Speaker Nancy Pelosi (more here).

However, although the timing is noteworthy and Weibo users wonder what it means, it is unsure if Sina’s decision is related to this issue. The English-language Sina portal (english.sina.com) stopped updating its homepage earlier this year.