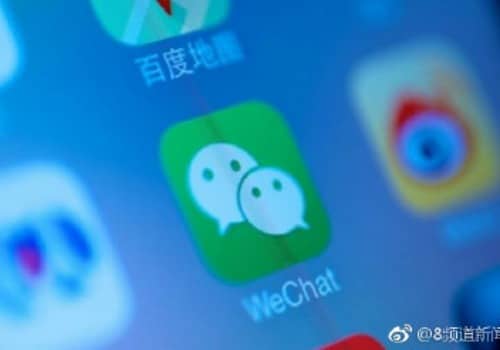 China’s WeChat, Sina Weibo, and Baidu are being investigated by China’s Office for Cyberspace Administration for “violating internet laws.” Chinese netizens respond with cynicism: “Just close them down and let’s all read People’s Daily.”

On the morning of August 11, the Cyberspace Administration of China issued a notice saying that Tencent’s Wechat, Sina Weibo, and Baidu’s Tieba (the online forum platform) are all under investigation for violating China’s “Internet Security Laws” (网络安全法). 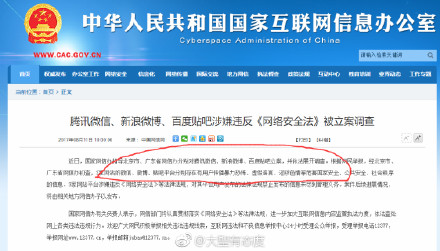 Several state media, including Xinhua, reported that users of the social media platforms have filed reports for the spread of “violent terrorism” (暴力恐怖), false rumors and obscenities, allegedly forming a threat to China’s national security, public safety, and social order.

Baidu responded to the allegations on Friday with apologies, saying it will actively cooperate with the relevant government departments to rectify its wrongdoings and further increase its efforts to shut out bad information, Sohu News reported.

Out of the three, it is Baidu that is most criticized by Weibo’s netizens. China’s tech giant has repeatedly caused controversy over the past two years. In May of 2016, the Baidu search engine was under fire after the death of a 21-year-old cancer patient who paid a lot of money for ineffective treatments advertised through Baidu’s paid search results.

Just last month, Baidu Maps was criticized for directing people to the wrong hospital when searching for Shenzhen’s children’s hospital. The hospital people were instead directed to, is one that is privately owned by the Putian Medical Group – which also happens to be Baidu’s important advertiser.

Now it is Baidu Tieba, its online web forum network, that is targeted by authorities, along with messaging and social media platforms Weibo and WeChat. Due to overall contempt for Baidu, many netizens agree with a tighter control on Baidu’s forums: “They should’ve been closed a long time ago,” some say.

But overall, the investigation of the platforms triggered much cynicism on Weibo, where some said: “Just close down everything and let’s watch CCTV every day,” or “I totally agree [with this investigation], it’s enough for us to read People’s Daily and watch state television.”

Others wrote: “Down with the Three Evil Tyrants of the Internet!”

“We already can’t say anything, why would they need to investigate?”, some wonder.

Following the news about a further investigation into China’s three tech giants, China’s financial newspaper Caijing reported that the stocks of all three companies went down on Friday.

Over the past few month, authorities have strengthened control on online and popular media in various ways. In late June, new rules regarding the content of online videos banned, among others, “displays of homosexuality.” Earlier this week, regulators issued a notification that television channels were discouraged from broadcasting entertainment shows during prime time.

After A4 Waist and iPhone6 Legs, Here Is the ‘Heart-Shaped Boob’ Challenge